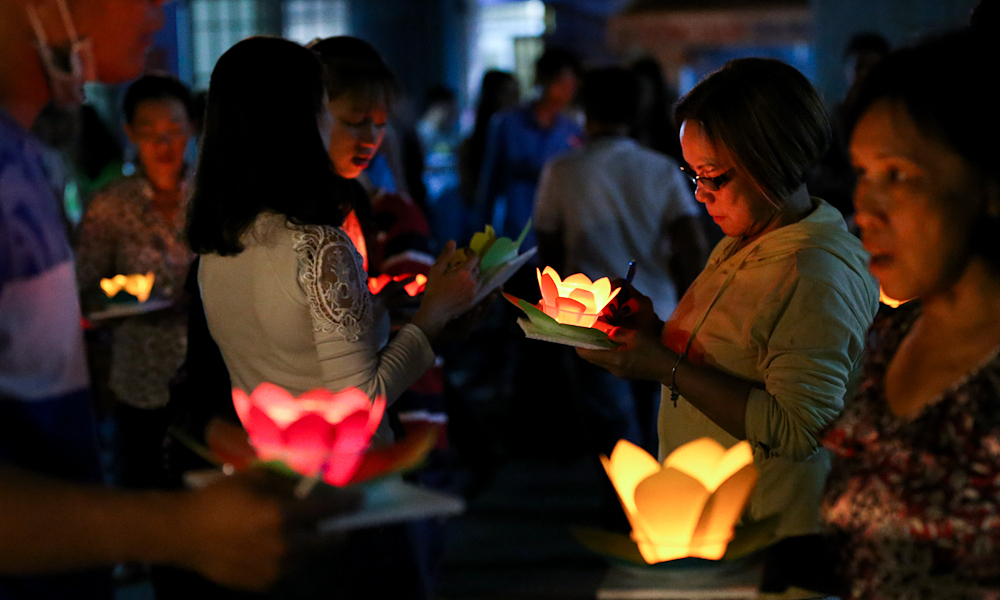 On the occasion of the Lunar New Year, the ceremony can be performed at a temple or at home. Ceremonies at home do not need to be as big and solemn as the end of the year.

The full moon of January, also known as Tet Nguyen Tieu or Tet Thuong Nguyen, is a traditional festival on the 15th day of the first lunar month.

In China, the Lunar New Year is considered the most important holiday at the beginning of the new year, also known as the “Lantern Festival” or “Lantern Festival”. On this day, there are other customs such as praying for peace, praying for happiness, eating floating cakes, reciting poems. People also write their wishes on lanterns and release them into the sky.

The full moon of January in Vietnam gradually moves away from the original legend, blending more elements of Buddhism and folk beliefs. This is an opportunity to go to the temple to wish for the good luck of sentient beings.

Because this day is the first full moon of the new year, the right time to pray for peace for the whole year should attract the attention and participation of a large number of Buddhists and people. The saying “Buddha festival year round is not equal to the full moon in January” has shown the importance of the full moon festival in January in everyone’s mind.

Basically, the focus of the full moon festival in January is the ceremony to pray for peace, health, abundance, prosperity and development for the people and the country. Therefore, more and more people come to the temple to worship Buddha.

The term star is used quite commonly in the Buddhist calendar to combine with the day or the auspicious sand. There are 9 stars (including Thuy Dieu, Thai Duong, Thai Yin, Moc Duc, Tho Tu, La Hau, Thai Bach, Van Hanh, Ke Do) used in year coordination to see human destiny. The ancients believed that there was a connection between celestial bodies (9 stars) and humans. Each year, a man or a woman has a different zodiac sign. On the day of the lunar eclipse, it is necessary to light a candle, pray for peace, and increase longevity.

Because the Lunar New Year coincides with the Thai Bach star awards ceremony (Rooster hour, 15th day of the lunar calendar, according to the old concept), many pagodas combine to organize the star awards ceremony. The ritual of worshiping the stars at the beginning of the year is different for each temple, and the chanting is also different. At the beginning of the year, there is a limit, so you can go to the temple, the following months you can do it at home.

There is no mandatory requirement to perform rituals at the temple or at home during the Lunar New Year, but because the nature of praying for peace at the temple is just general, most people still do it at home. Just pay attention that the ceremony at home does not need to be as big and solemn as the end of the year.

Contents of vows (for reference only):

Hail to the God of the Earth, their ancestors…., their aunts and uncles, and the immortals. Today is the full moon day of January, the year of the Goat. We are…………. Gods, burn incense, devote yourself to worship. Please bless the maintenance, healthy children, peaceful family, good wishes.