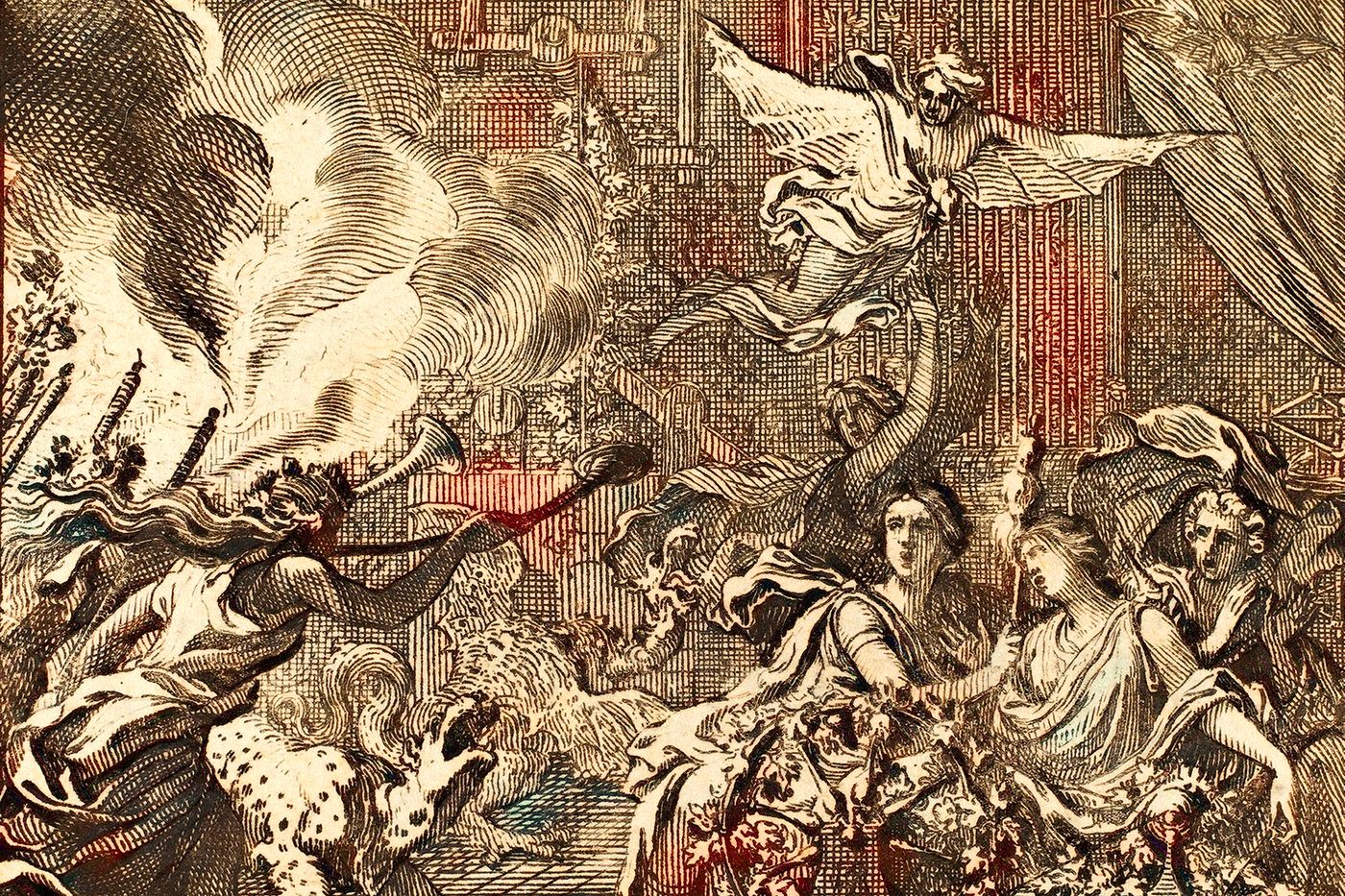 1. The most diabolical: in the Middle Ages

The bat is part of the medieval bestiary. It is found, although infrequently, in the decoration of religious buildings and in illuminated manuscripts. An animal living at night and evolving in the dark, the bat is associated with the refusal of divine light and therefore with the diabolical figure. In the medieval vision, the bat worries because it escapes zoological classifications, both bird and mouse, belonging to the aerial and underground worlds.

Perceived as a blind or visually impaired animal, it symbolizes ignorance, which explains its presence in the representations of the synagogue, marked by Christian anti-Judaism. In representations of the seven deadly sins, it is often associated with envy, a vice that requires deviousness and action in the shadows. In practical life, however, the bat was recognized as having the benefit of warding off the threat of xylophagous insects, lovers of paper, which would explain its presence in libraries and in the margins of manuscripts.

2. The most melodious: “Die Fledermaus”

Make no mistake about it: no flying bats in the Viennese salons set to music by Johann Strauss in his famous operetta (1), premiered at the Theater an der Wien on April 5, 1874. The animal that gives his title to this jewel of humor, wit, but also cruelty and melancholy, is evoked only through a disguise. The one worn by Doctor Falke during a carnival evening. Abandoned asleep by his party companion, Gabriel von Eisenstein, Falke had to, when the day came, circulate in the streets thus decked out, under the mocking gaze of the Viennese. He does not need more to invent a stratagem trapping the traitor, the “Revenge of the Bat”. Masquerades, sentimental adventures, misunderstandings lead the characters from a princely palace to prison, in a whirlwind of airs and breathtaking ensembles. Until the end of Act III, “O Fledermaus, o Fledermaus” (“Oh bat, oh bat”) which finally brings down the masks in a great surge of reconciliation.

3. The most transformed: “The Metamorphoses”

To be transformed into bats, this is the punishment that strikes the three daughters of King Minyas, in book IV of the famous Metamorphoses of Ovid. The Latin poet gives us their first name: Leucippé, Arsinoé and Alcathoé. Their fault? To have continued to work instead of going to bacchanalia to worship Dionysus. The god’s revenge is first manifested by several fantastic phenomena: the sound of invisible tambourines burst, a smell of myrrh and saffron spreads, the fabrics of the looms turn green and the fabrics are covered with ivy, the house shakes, torches of oil light up and beasts let out howls.

“The sisters hide under the smoky roofs, run hither and thither, dodging fires and lights, and as they seek the darkness a membrane stretches over their shrunken limbs and encloses their arms in light wings. »,describes Ovid. Note that this metamorphosis takes place when “Already the day had passed, and the moment was approaching which could be called neither darkness nor light”a detail that we find in the fantastic tales of vampires…

4. The most elegant: the batwing dress

Paul Poiret, Yves Saint Laurent, Marc Bohan, Paco Rabanne, Pierre Cardin… Many of the big names in 20th century fashionand century have signed so-called “bat” dresses. But you have to go back much further in history to find its origin and cross the borders to Turkey. There, from the Middle Ages, a garment called “dolman” already sports wide armholes evoking the wings of the animal. Further still, the Japanese kimono immerses the hands of those who wear it in the vast folds of silk. The vogue for the Far East which seized Europe at the turn of the 19th centuryand and XXand centuries accompanies the rise of the fashion industry. The opulent comfort of the sleeves – we don’t count the length of fabric needed to make them – underlines the relaxation and ease of those who drown their idle arms in this ocean of fluidity. But wars, shortages of fabrics, the rise of women’s work undermined the batwing dress, whose favor was only restored in the prosperous years of the end of the 20th century.and century. The generous sleeve then spreads, investing in particular the cozy pullovers.

It was at the end of the war, in 1946, that Germaine Richier sculpted this man bat with ragged, injured wings. A stuffed specimen of this mammal, kept in his studio, served as his model. The artist used tow, dipped in plaster then placed on an iron frame and shaken. A new technique for her, which gives a tormented aspect to this work, like the sculptures of Giacometti at the same time. After having started with fairly classic figures, Germaine Richier invented, during the war and her exile in Zurich, her first hybrid creatures, half-human, half-animal, like so many beings reduced to their basic needs. She has a predilection for warrior-looking beings, tiny or hidden, with feminine names: The grasshopper, The Spider, Mantis… Her Bat was cast in bronze,then golden,like a luminous apparition emerging after the night of chaos. She seems to embody a fragile hope that is trying to spread its wings. The Fabre Museum in Montpellier keeps a copy.

6. The most tormented: “The Dark Knight Returns”

This is the work that revived the “Batmania”. In this comic strip published in 1986, the American author Frank Miller takes up the hero created in 1939 by Bob Kane and Bill Finger, very inspired at the time by the whimsical figure of Zorro. But it is more the vision of a dark vigilante from a Gothic novel, traumatized by the assassination of his parents during his childhood, which is chosen in The Dark Knight Returns.

The 55-year-old billionaire Bruce Wayne has stopped wearing the Batman costume since the death of his faithful sidekick Robin, ten years earlier. However, he stacks up to fight against the explosion of crime. Aimed at an adult audience, this albumshows a character haunted by the original trauma, dreaming of a better world where young Bruce Wayne would not be a victim. According to Frank Miller, “Batman is a hero who hopes he doesn’t have to exist”. It is this same perception that will seek to give, a few years later, the films of Tim Burton and especially of Christopher Nolan in The Dark Knight. The black Knight(2008).