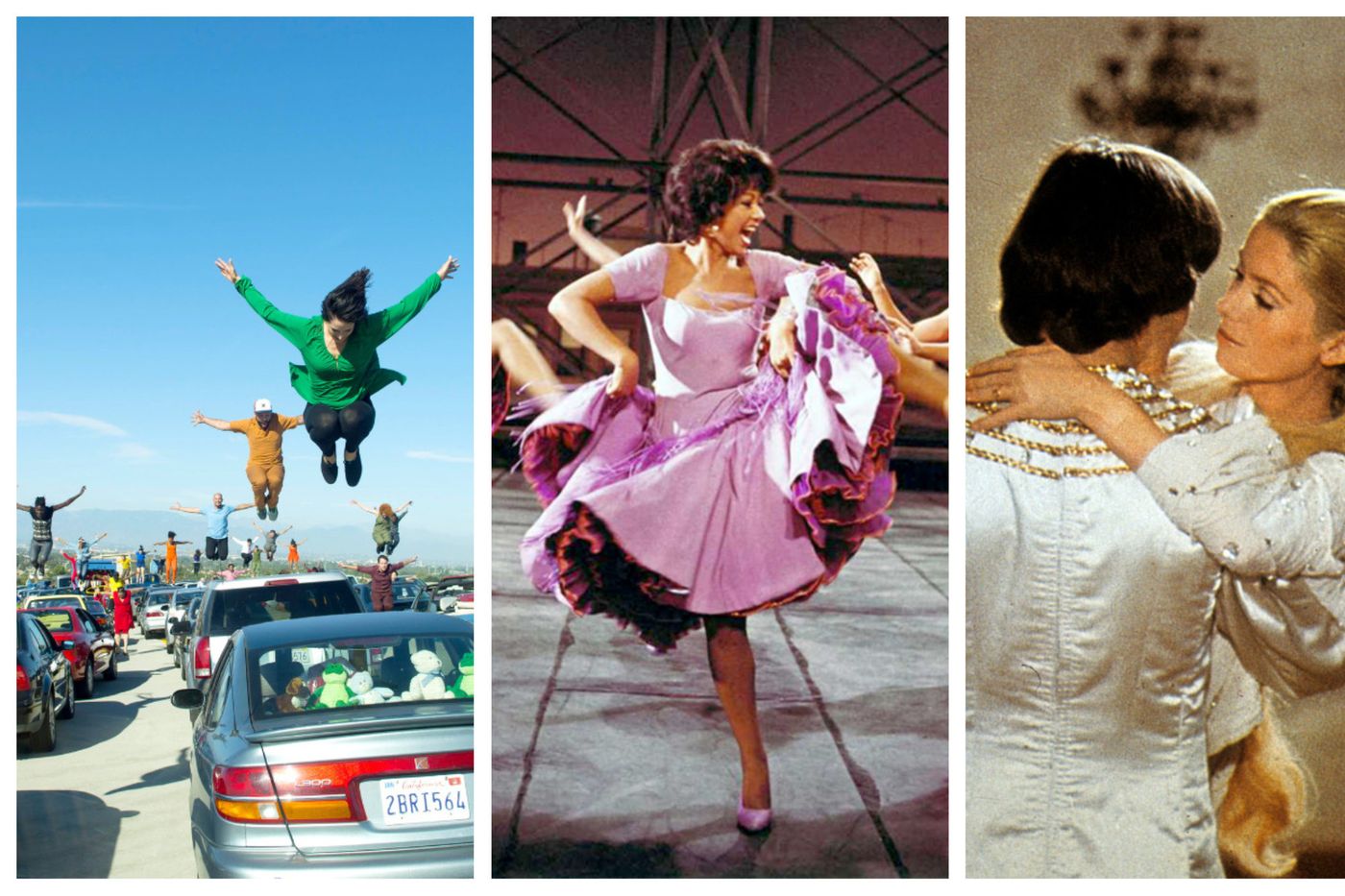 1948. The call of adventure, the ardor of romance blaze in the elated timbre of Judy Garland calling on the pirate, Mack The Black, to take her far away. Beyond reality, a small life, an arranged marriage, a straitjacket of conventions, towards immense and free horizons. Going from a mundane daily to a romantic imaginary, isn’t that the very promise of the musical? This border between reality and dream, Vincente Minnelli pushes it back with The pirate, inspired by the great Hollywood adventure films.

To music by Cole Porter, in a pictorial symphony of red, black and fire, Judy Garland, tense, passionate, plays, sings and dances with fever. The object of his fantasy will be embodied in Gene Kelly, athletic, funny and free. He will open the doors to the world of illusion for him on a new journey beyond the rainbow, Over the Rainbow.

1961. To a breathtaking choreography, the young Puerto Ricans of the Sharks clan snort on a New York rooftop. America questions with punch the American dream lived by immigrants. The women, led by Rita Moreno (voiced by Betty Wand), rejoice in the freedoms won. The men, trained by George Chakiris, dazzling with ironic verve and who sings his role, remind them of the racism and injustices of which they are victims. “Buying on credit is great”, they launch. “One glance and rates double”, they retort. “I will have an apartment with a terrace” / “First lose your accent!” “.

→ ANALYSIS. “West Side Story”, the musicals sing under the crisis

This frenzied joust signed Stephen Sondheim (deceased November 26, 2021) carries a sharp social criticism contrasting with the melodic gaiety of the song. In 1961, the shock of West Side Story in the cinema is political as well as artistic. In 2021, the monument remains relevant with the remake of Steven Spielberg, released on December 8.

► Nostalgic: The whirlwind by Serge Rezvani

1962. In a thin but bewitching voice, Jeanne Moreau sings of the fascination felt in front of a ” fatal Woman ” to “Opal eyes”. The actress asked François Truffaut to include in the soundtrack of his film Jules and Jim this title of Serge Rezvani, his painter and poet friend. Under the pseudonym of Bassiak, he writes “For Jeanne, songs as light as butterfly wings …”.

If she was not the first performer, Francesca Solleville having created The whirlwind, Jeanne Moreau embodies this free woman “With a beautiful pale face”. She will resume her ballad with Vanessa Paradis in 1995 at the Cannes Film Festival in a beautiful nostalgic sequence. “Bassiak’s songs, intelligent and tender (…), are admirable first of all for the accuracy of their proportions ”, wrote Truffaut. Bassiak will offer other verses to his muse, including The Life of Cocagne and My memory is failing.

► Dreamlike: Secret dreams of a prince and a princess by Jacques Demy and Michel Legrand

1970. To stage a dream in Donkey Skin, a fairy tale bathed in dreams, Jacques Demy imagines a doubling of bodies. The prince, interpreted by Jacques Perrin and sung by Jacques Revaux, remains leaning in his bed throughout the scene, while his double joins the princess played by Catherine Deneuve and sung by Anne Germain. The symbolism of the color white seals the imaginary union of the two young people. Freed from the blue and red of their kingdoms, they finally rejoice freely.

Michel Legrand’s playful score marries their euphoric amorous dialogue, dreaming of transgression. “We will do what is forbidden / We will go to the refreshment stall together / We will smoke our pipes in secret / We will gorge ourselves on pastries …” The ambiguous dimension of the fairy tale is illustrated with the sexual metaphor of rolls in the green grass after which the languid prince and princess, slide in a boat towards happiness in a wonderful, psychedelic climate.

2013. Planetary success, Happy offers from its title a promise of happiness. With its dancing and simple rhythm, easy to sing, impossible to forget, the song keeps this promise, illustrating the euphoria of Gru, a former super-villain turned father. The hero
animated film Me ugly and nasty, box of 2010, gave up crime in the second film released in 2013 to devote himself to his dream family: three cute little girls, plethora of Minions, hilarious yellow creatures, and a father figure, Professor Nefario.

Sung lightly by Pharrell Williams, Happy embodies a childish dream of joy, friendship, cloudless human warmth, offered to all. She transforms the ungainly Gru into a dancer of moonwalk and will be the subject of a memorable clip shot in Los Angeles with hundreds of strangers, stars including basketball player Magic Johnson, Minions… for twenty-four hours!

► Vitaminée: Another Day of Sun by Benj Pasek, Justin Paul and Justin Hurwitz

2016. The irruption of song and dance in the most banal daily life is a balancing act. Damien Chazelle succeeds with great fluidity by transforming the tangle of freeway access to Los Angeles into a magical playground. A shot of morning traffic jams, a brief motif on the piano, a young woman humming …

Melodic rise and flight of the choreography defy the laws of gravity in a vitamin sequence. The enchanters of La La Land embody all the mixed communities of the City of Angels down to their dance styles. From this first energizing scene, the film fits with virtuosity in the great tradition of the musical. Life seems light, airy. The real, enchanted, suddenly opens up more possibilities.