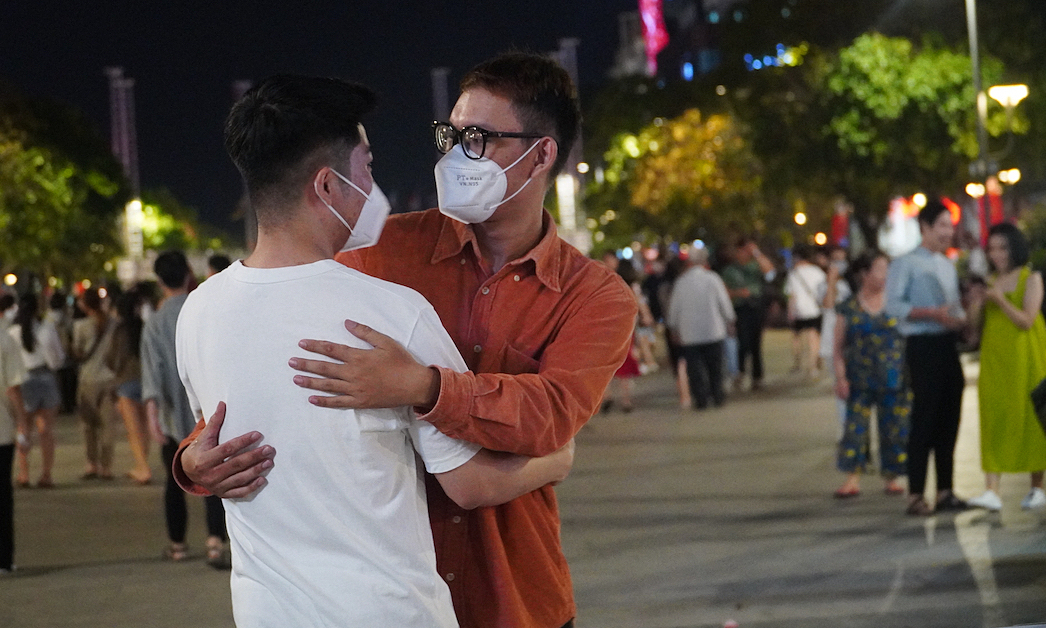 Ho Chi Minh City“Let me hug you,” said the young man from the crowd and hugged Thien An at Nguyen Hue pedestrian street (District 1).

“How was your day?”, An raised his head and asked with a smile. The boy suddenly burst into tears and said, “I’m so bad today, can I hug you again?”. An continued to hug and pat the emotional young man’s shoulder.

The person who just received a free hug from Thien An introduced himself as Doan Thanh Long, from District 12. Long said that it had been two years since he had been hugged so warmly by someone.

As a child Long noticed a difference in his gender. As a boy, he always wished to wear a dress like his sister. Born as a teacher’s son, his father worked in the army, making Long not dare to reveal his true gender. In 2018, many family events hit, Long fell into depression. From there, he locked himself within four walls.

For the past four years, he has lifted himself up, looking for a doctor to treat, so his depression has subsided somewhat. Tonight, Long feels lonely again. He was walking around the pedestrian street when he accidentally met An standing here.

“I immediately ran to hug him. Even though the hug was free, it was full of energy, helping me to be comforted and relieved. And I boldly asked to stand with An”, the 29-year-old man confided.

Pham Thien An, a 23-year-old man from Long An, who initiated the activity “Free hugs” in the middle of the pedestrian street. An said that she used to be an introvert, shy, likes to be alone and rarely interacts with the community. In early 2021, he left Da Lat to live alone. Here, he accidentally participated in an exchange about psychology. At the end of the exchange, everyone got close to each other and gave each other hugs and said “I thank you, I’m sorry”.

An said, on the first day, he was timid and did not come to hug anyone. Then someone took the initiative to talk to him and hug him. That action made An have a strange feeling that cannot be described in words. “And in the days that followed, I started to open up more,” he said.

Moving to Hanoi to live for nearly a year right in the middle of the epidemic season, An received help from strangers. Also from there, making him want to help others in return, not only physically but also mentally. Back in Ho Chi Minh City, Thien An embarked on the project “Free hugs”.

An shared, in Vietnam, there are also some people who have done “Free hugs”, but it is not really a comforting activity. He wanted to build his own substance and wanted it to bring more value.

“Saying ‘Free hugs’ to make it easier to hear, but actually I named the project “The story of the hug – not only a hug, but also a story”, Thien An said.

“Hello, how are you today?”, An’s opening sentence when giving a hug to the opposite person. Just like that, at exactly 7pm, An appeared in the middle of the street, standing with his arms wide open with a sign next to him, with the words “Come hug me, if that makes you better”. In addition, Thien An also prepared small gifts such as: 99 different positive messages, 99 flowers or candy to give to everyone, his own expenses.

The project started on 2/6. So far, he has done it 5 times at Nguyen Hue pedestrian street, and once in Vung Tau.

In the first “Free hugs” session, An felt quite shy because she was not really confident and courageous to stand up to do so. But when he received his first hug and understanding from strangers, he was motivated to stand for three hours that night.

“They don’t hesitate to give me hugs, even share their feelings and stories that make me feel this activity is more meaningful”, An handed the candy to a girl, then said smiling.

One evening in July, a 12-year-old boy holds a small barrel, inside is a fire circus instrument. He walked over, hugged An and said “thank you for making me feel like hugging my grandma”. It was a memory he would always remember.

The boy told An, his grandmother passed away almost a year ago. When he was a child, he was often hugged and comforted by his grandmother, so every night when An appeared, he ran to hug him, received a candy and started working for a living.

“At some point in your life, you need a hug. It is not only a message to help us understand that we are not alone, but also creates a lot of spiritual value,” he said.

Just like that, during the past 3 months, the image of “Free hugs” of the Long An guy has become familiar to many people when walking on Nguyen Hue pedestrian street.

Tran Quang Phung, 18 years old, from District 1 said that he has watched many times on tiktok about “Free huhgs” but this is the first time he has experienced it directly. “I know a hug is very normal for everyone. But if a day has too many negatives coming to me, a hug can be a medicine to dispel fatigue and give me more motivation,” the student said. first year said.

Two weeks of travel in Vietnam, Elia, a Spanish girl, was very surprised when she was given a free hug in the middle of the street. She said: “This is probably an unforgettable trip for me. A young man hugged me, smiled and wished me well. It was interesting. I thought this action was only available in Europe. “.

Touch is the most beneficial form of intimate communication. According to a survey of 40,000 participants, the most common words associated with touching are “consoling”, “warmth” and “loving”.

Psychologists say that hugs produce oxytocin, commonly known as the “love hormone”. The more and longer we touch or hug, the more it is created. These are hormones that have been shown to have anti-stress effects.

We can find safety in interpersonal contact, even if that contact is not rooted in trust, says psychologist and lead researcher Sander Koole of VU University Amsterdam in the Netherlands. religion or life values.

Research results also show that people who have physical contact with others experience less anxiety than those who do not. “Even fleeting hugs can help the hugger cope effectively with a dire situation,” he says.

Vo Minh Thanh, Lecturer at the Department of Psychology, Ho Chi Minh City University of Education, said that many Westerners greet each other with a hug or even a kiss on the cheek to express their feelings and love. It is very normal for them. But for Asian culture, especially in Vietnam, we are still afraid to give each other hugs in crowded places. Many people think it’s a private matter, avoid touching…

“But let’s look at the positive side, the motivation that comes from the hug is to do something, not just to hug each other physically. But here is to share with each other, listen to the message of love,” the psychologist said.

Mr. Thanh also shared, a very light hug but shows care and love.. Especially young people nowadays always feel lonely in their own family. They need someone who can listen, who can give them a place to vent. Thien An’s “hug story” has done that.

In the future, An wishes to spread “Free hugs” to many places in Vietnam. He will combine the exploitation of the values ​​of life and the landscape, along with the Be With You activity. “I think this activity will help those who are lonely and need a friend by their side, just to listen and confide,” he said.