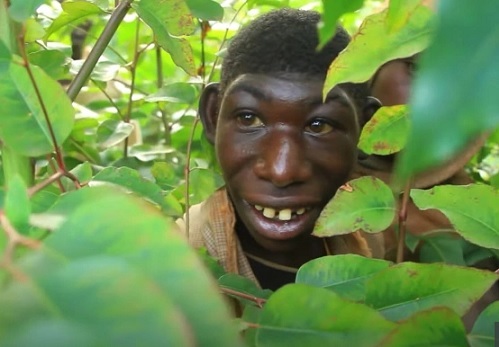 RwandaZanziman Ellie was shunned by the villagers, bullied by children of the same age because of his unusual appearance, so he stayed in the forest for 22 years.

Zanziman’s mother Ellie got him after five unsuccessful births. But Ellie has a deformity, her head is only the size of a tennis ball, and her face is very strange.

The jungle boy is back

Unable to communicate, without awareness, Ellie does not go to school like other children in the village. “Ellie is always the target of bullying, friends often call my child ‘monkey’ or ‘ape’,” Zanziman’s mother said in an Afrimax TV documentary, February 2020. The boy often ran into the forest to hide.

“It only eats grass, bananas, fruit in the forest, runs more than 200 km a week. Every night I have to run after her to find her,” the mother said.

After the movie, Afrimax TV called for a fundraiser for mother and daughter Ellie on the GoFundMe page. The appeal received support from people from all over the world.

Currently, Zanziman has received a donation, enough to attend a school for special children in the Ubumwe community center. Now, he is a 22-year-old young man, everyday wearing a vest to school, eating full meals and sleeping on a warm mattress.

“I am very happy when my son is going to school. Kind people have built a house for me and my daughter and my sadness has been emptied,” his mother said.

Contrary to her previous life, every time she appeared on the street, Ellie was asked by many people, constantly asking to take pictures with her.