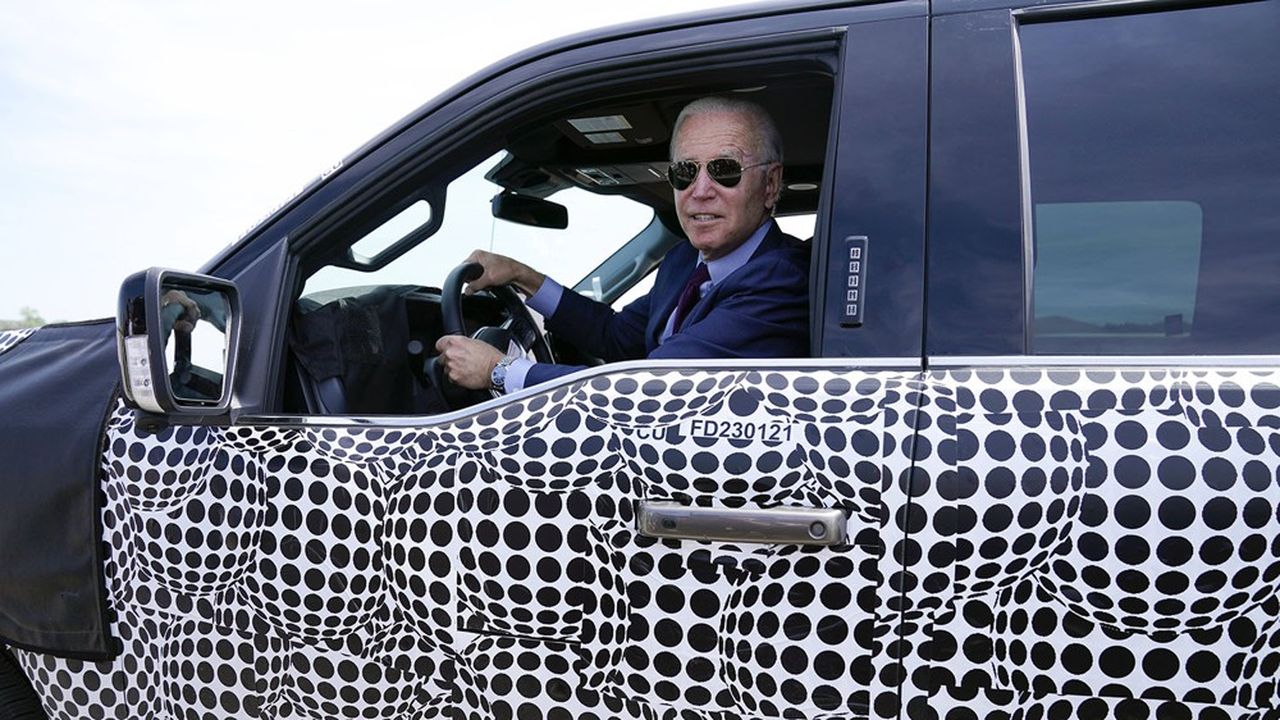 “This stuff is quick!” What better advertisement than a President of the United States, Ray-Ban glasses on his nose, which starts off with a bang under the eyes of photographers? By previewing the F-150 Lightning, an electric version of Ford’s F-150 pickup, Joe Biden wanted to show Americans on Tuesday in Michigan that electric cars are for everyone, and not just for Californians.

The F-150 is in this respect the most powerful symbol in the United States and a key stake for the new boss of Ford Jim Farley: over the last ten years, Ford has sold 7.38 million copies of the vehicle and its variations. F-Series, according to Cox Automotive. Far ahead of its challenger Chevy Silverado from Chevrolet (5.34 million units).

Associated today in the United States with a “rustic” way of life, the F-150 in electric version must demonstrate that it will be able to do as well as the thermal model in terms of power. “If we want customers to turn to battery-electric vehicles, we have to show them better,” said Darren Palmer, entity general manager at Ford. With a “high strength military grade aluminum alloy” body, the chassis will be able to support a payload of 900 kg and tow up to 4.5 tonnes. And the base model will be able to drive 370 kilometers without recharging, Ford displays.

In a country known for the poor quality of its electricity network, the manufacturer is also promising the possibility of using the vehicle as electricity storage in the event of an outage at home – the price of the option was not disclosed, however. .

Doing “better” also involves price positioning: the basic model will be offered just under 40,000 dollars (32,750 euros), while the classic version is now sold from 29,000 dollars, but with an average price which is rather around $ 50,000.

The F-150 Lightning will not be marketed until spring 2022, but Ford has opened a pre-reservation system, modeled on what Tesla did in its early days. With a minimal stake – $ 100 – and cancellable, the manufacturer said it had garnered 20,000 requests in twelve hours this week.

The F-150 Lightning will be produced at the Rouge plant in Dearborn, a suburb of Detroit, Michigan. Ford has announced a global investment of “at least” $ 22 billion by 2025 to push the fires in the electric, with other models like the Mustang Mach-E and the E-Transit van. According to Cox Automotive, electrified vehicles represented 7.8% of new car sales in the United States in the first quarter, to 304,000 copies (including a third purely electric), up 3 points over one year.