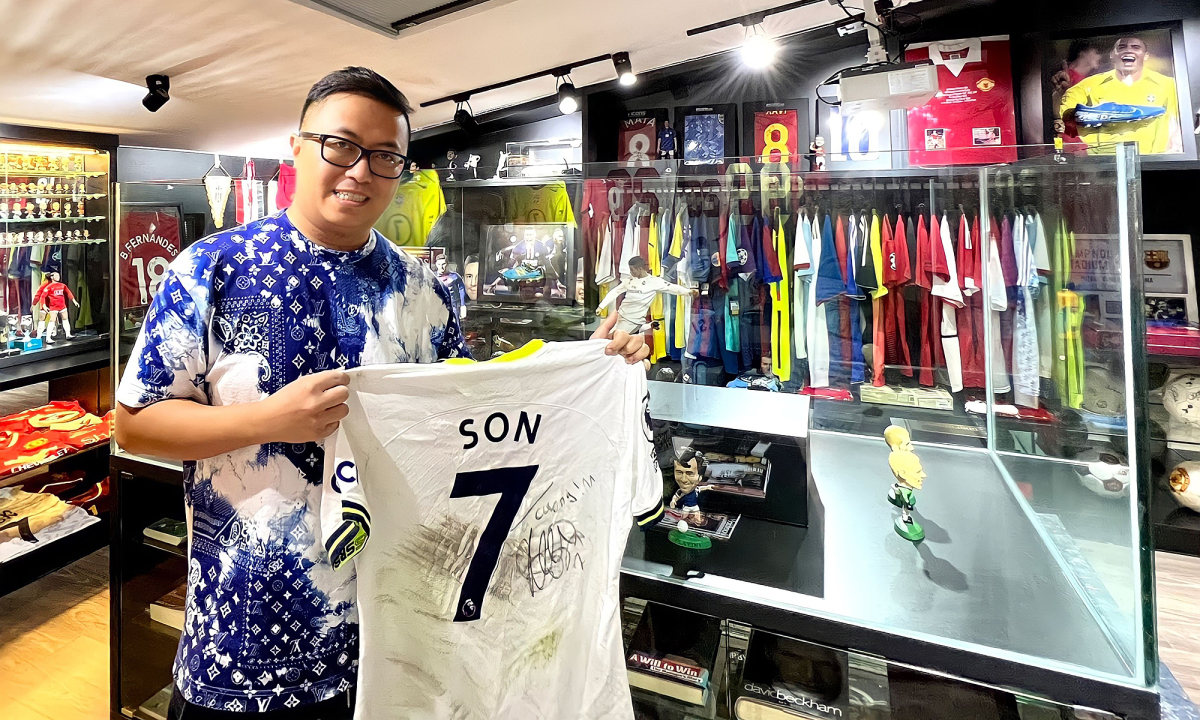 Collecting hundreds of shirts with stains on the player’s field, Quoc Cuong was also greeted and signed by the top stars of the football village.

Among football fans in Vietnam and perhaps Asia, few people have a collection of king sports as much as Pham Ngoc Quoc Cuong, 39 years old, a member of the Board of Directors of the Railway Construction Corporation. RCC.

In his own home, from the living room, bedroom to the aisles and stairs, football artifacts are displayed. Mr. Cuong also designed a space of about 35 m2 to put the most valuable items.

The room is inspired by the design of football museums around the world. One wall hangs hundreds of pictures the owner took with the players. Glass cabinet in the middle of the gallery with statues, trophies, medals, shoes, balls, flags, books, photos… There is a collection of items about former player Diego Maradona or two current football legends, Lionel. Messi and Cristiano Ronaldo.

The jersey area is like getting lost in a fashion shop. The shirts still have shoe prints, the smell of sweat with the signatures of the players and the words “for Mr. Cuong(dedicated to Mr. Cuong).

The love of football came to Quoc Cuong when he was a 7-year-old boy. The prompting lyrics of the song Italian summer in World Cup In 1990, the same image of the “golden boy” Maradona crying furiously after the final was broadcast over and over on TV, making a strong impression on Cuong.

Passionate about football, a student at Quang Trung Primary School, Hoan Kiem District often skips breakfast, spending money to buy two sports newspapers a week. Quoc Cuong read, then cut and paste the player’s photo into a notebook, at most pictures of Maradona’s idol. “At that time, Hanoi had only one shop in Trang Tien that sold football artifacts. Only a few pieces made me fall in love, so I kept going there to look,” he recalled.

Later, while studying abroad at Paris Est-Créteil University and Scientific Management at Paris Dauphine University (France), Mr. Cuong had international relationships and was introduced by some friends as the first contacts. with world players.

In Vietnam, once, Mr. Cuong participated in an auction of an artifact signed by a player to raise funds to support the people in the Central region. “It was from this time that I became acquainted with the groups that are passionate about collecting football artifacts and getting the first items,” he said.

Since then, the number of artifacts has thickened, to the point where two years ago he was forced to work as a gallery. Up to now, just the shirt, he has more than 1,000 pieces, and shoes, balls, towels, flags, statues, trophies, pictures, books… can’t count.

Among collectors, the most popular form of buying and selling commercial autographed shirts. For many people, owning a shirt is worth it. However, this form has no memories with the player, so Mr. Cuong is not really interested.

“In the world, there are also shirts for players to wear, but in reality it is difficult to prove. I also do not dare to buy,” he said. These “fresh” shirts have the lowest price of tens of thousands of dollars, the most expensive is currently the shirt Maradona wore when he scored with his hand in the quarterfinals of the 1986 World Cup reaching $9.3 million.

In recent years, thanks to the advantage of having many friends with status and close relationship with European players, Mr. Cuong has collected a large number of jerseys.

In May 2022, after the final of the UEFA Champions League, Vietnamese collectors suddenly thought that it was necessary to further enhance the individuality of the artifacts. “I came up with the idea of ​​asking the players to record a video signing autographs for me,” he said.

This idea is impossible for many people. Cuong also only dares to set a goal to have a few videos like this because even if it’s only a few seconds to a few tens of seconds, it is very difficult for anyone to convince the top players to do it because it can affect their image.

This process is not simple. In addition to building a relationship with the representatives of the players, Mr. Cuong must send his resume and share his passion to them. After about three months, he got his first video. To date he has about 30 videos of players in different clubs, such as Kylian Mbappé, Bernard Mendy, Hugo Ekitike, Erling Haaland, Riyad Mahrez…

Of these, Son Heung-min’s sweat and shoe prints still remain on the video and shirt in the Chelsea – Tottenham match on August 14, 2022, making Quoc Cuong the most emotional and proud. “Hello, Mr. Cuong! Son here. Hope to see you in London“,” the “prince of Asia” said via video.

“Son is the second person to record a video for me, after midfielder Kalidou Koulibaly. Before that I never thought of receiving a gift from Son. I believe any Asian would love Son, the player who raised the ball. regional rock,” shared Mr. Cuong.

Before the invitation of the players, Mr. Cuong immediately arranged a trip to Europe in early September. During 12 days, he moved through Munich (Germany), Madrid, Barcelona (Spain), Lyon (France) and Belgium, spend the whole schedule meeting the idols. That time he met and took pictures with about 50 players from the top European clubs.

There are days when Mr. Cuong hardly sleeps. Like the time he set a goal to get the shirt of one of the players Messi, Neymar or Mbappé, he went to see the PSG match as a guest at Lyon, on September 19. Then asked a Lyon player to exchange shirts with three superstars, eventually getting Mbappé’s shirt. “Not yet got his signature, so I continued to move to the training ground of the French team, by arranging to meet Mbappé to sign and take pictures. Two days of running and running, I only slept for 2 hours, but receiving this ‘fresh’ shirt is not tiring at all,” he said with a smile.

One day, he was lucky when he was invited by Real Madrid midfielder Camavinga to meet at the filming site of an advertisement. When chatting, Camavinga said that she only knows Thailand and Singapore in Southeast Asia. Mr. Cuong immediately opened photos of Vietnam’s landscapes and nature to promote. “At the end of the talk, Camavinga admitted that Vietnam is more beautiful and will one day visit,” Mr. Cuong shared.

Also during the trip, he also achieved the desire to talk to Sadio Mané, who thought there was a video to give him the shirt first, but at the last minute did not want to do it, but made an appointment to meet in person.

“After the match, Mané followed the delegation to the hotel, all fans were blocked by security. But Mané noticed I was standing next to the connector and remembered the appointment, so he called me in.” Cuong said.

With two current football legends, Mr. Quoc Cuong has collected a lot of artifacts from photos, season shirts, and clubs. He currently owns one of the two shirts Messi wore against Montpellier in the French championship and the boots in the 2016 Copa del Rey final. As for Cristiano Ronaldo, he also got the jersey of one of the last matches. still wearing the MU shirt.

“These are two famous players I have yet to meet face-to-face. It will be difficult to approach, but I will try to conquer the next time,” said Mr. Cuong.

Artistic pitcher Do Kim Phuc said that Quoc Cuong is an avid fan of king sport, ready to go everywhere to see and collect. “So far, his collection is rare in the world. In the future, there are many priceless memorabilia,” Do Kim Phuc said.

Mr. Tong Duc Thuan, chairman of the board of directors of Midomax Vietnam Joint Stock Company – specializing in the supply and distribution of sportswear, said that there is no one in Vietnam with a large and valuable collection like Cuong’s. “Of the many valuable artifacts that Cuong has, I am most impressed with Son Heung Min’s shirt because it was the first big star to give a shirt and record a video for Cuong,” said Mr. Thuan.

As a businessman, a jazz producer, Mr. Cuong said these two aspects have helped a lot for his passion for football. His determination, thinking big in business, helps him to dare to pursue collecting goals that others don’t think of. The artist’s soul allows him to forget to eat, to sleep, to burn his heart out with football.

World Cup 2022, Pham Ngoc Quoc Cuong brought 20 shirts to Qatar to “be on fire” in matches.

Photo gallery and meeting the players of Mr. Cuong.