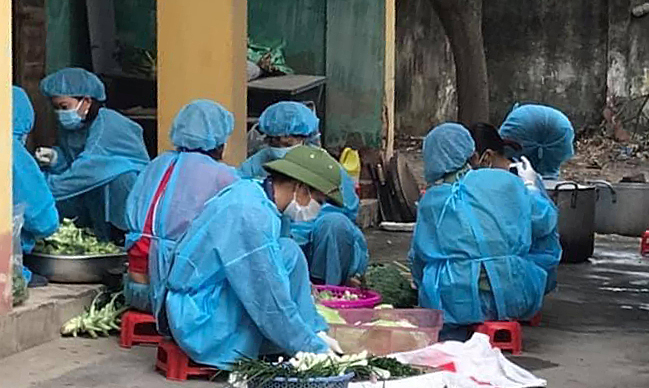 Hai DuongFrom the middle of the night, the field kitchens in the Chi Linh epidemic outbreak area all went on fire, preparing thousands of meals for the children and the isolated people.

10:30 am February 6, more than 140 boxes of fried chicken rice with ginger, fried beans and soup were delivered by the group of Ms. Nguyen Thi Huyen and volunteers from Sao Do ward, Chi Linh city to Le Loi kindergarten and secondary school, where there are 140 primary school students are on quarantine.

To prepare these meals in time for lunch, the group had to start shopping and cooking from 5am. After lunch was delivered, they were busy preparing for dinner again.

Hai Duong is the largest epidemic area in the country with 290 positive cases, thousands of F1 and many residential clusters blocked, many doctors, doctors, police and healthy people have been mobilized to fight the epidemic.

An outbreak of Covid-19 caused Huyen’s work to be interrupted, but this woman “did not have time to be sad”. She immediately responded to the city’s call to join volunteer groups. “Everyone’s morale is very high, with the goal of not letting anyone lack basic necessities. We set up a team to help solve the things that need to be done right away,” said Ms. Huyen, 39 years old.

In the early days, her group called for donations for mosquito nets, bought orange juice, and snacks for the children. However, realizing that young children need a diet that is not only nutritious but also soft and easy to eat, Ms. Huyen decided to set up a field kitchen.

The kitchen started operating from the afternoon of February 3, with the first day menu including chopped pork rolls, scrambled eggs, potato soup with bones. Today, she bought chicken to filter roasted meat with ginger, and simmered bones for water to cook mushroom corn soup. “The food is delicious, nutritious, and strengthened against diseases during the season,” she said.

Every day, the kitchen provides nearly 300 meals, each serving about 15,000 VND, not including fuel. Funding for operations is called for from funding sources. In which vegetables, salted fish sauce and rice are supported a lot. They are most worried about funding to buy fish meat.

Since the epidemic began, Ms. Huyen’s three children from grades 1 to 9 stayed at home with her grandmother, while she and her husband left from early morning to late evening. He joins the team to deliver the cargo to the points free of charge. “I must say that the past days, the face turns dark, tired, but when the children eat delicious rice, we have the motivation to try,” she said.

30 km away, the Thai Hoc field kitchen was on fire from 2am, 7 o’clock provide porridge for isolated children and old people at Sao Do University 2. The kitchen started operating on January 29, one day after Hai Duong had the first positive case.

To get up early, Ms. Phuong Dung, 32 years old, had to go to bed early in the evening but was worried about being late, so she could never sleep until the alarm rang. Serving kitchen consists of 8 members, divided into 2 cooking locations to avoid overexposure. Each day they provide about 300 servings of porridge. “Thinking of the old people, children lacking many things, we hope these hot porridge dishes to support everyone”, shared Ms. Dung.

Also thanks to the support of people inside and outside the province, the Women’s Union of Cong Hoa ward has set up a kitchen to provide 600 servings per day to the isolated area in the area and quarantine posts.

Ms. Le Thi Tam, chairman of the ward’s women’s union, shared her feelings deeply with everyone’s kindness. There are people with very difficult circumstances but they bring to the kitchen apple, grapefruit, dozens of eggs, cabbage, some people donate a bottle of honey. “People with little contribution, people who have a lot contribute a lot. Without money, they contribute. During the epidemic season, we will receive and give love like that,” she said.

Cong Hoa Kitchen started operating from February 2, with 5 volunteers and mothers, girls from 10 women’s associations in the ward take turns. Thanks to the large force, they still have time to rest and take care of their families.

In addition to giving meals, the branch also organized gifts for a number of isolated families in difficulty, for example a whole family is in isolation, only the 90-year-old man has a broken leg and two young children or a family. Another has a positive mother, a father working away from home, a 7-month-old child at home with her grandmother …

Witnessing too many volunteers but being hungry herself, eating instant noodles and bread, Ms. Thanh Giang, a resident of Chi Linh, decided to set up a field kitchen to serve the volunteers.

Giang started to “carry the prison and the total” in a completely natural way. On January 29, many people had to enter quarantine areas and blocked many locations. On Giang’s personal page, sometimes someone “asks for help”. “Can anyone help me. I bought the meal but the money shipped too much money”, “My child needs a blanket in the quarantine area where my whole family is blocked”, “I really need a protective tape born…

She volunteered to help. Many others are similar. After only a day or two they assembled into a team of volunteers doing all the things the people in the locked, quarantined, and locked-out areas needed help. They also deliver, collect vegetables to assist in gathering to the points and transport to places. “We also provide emergency relief whatever people need,” she said.

Working from morning to night and for a few days, many people eat mostly bread, pastries, and noodles with vegetables. “Many volunteers like us worry that going out can become infected without going back to their families. For 5 consecutive days there is no grain of rice in the stomach. For that reason, we set up a kitchen specializing in cooking and clothing. for volunteers, “she shared. Her kitchen cooks and posts on Facebook. Anyone can come to eat …

On the night of February 5, Ms. Nguyen Thi Huyen was awake. After 3 days of cooking, her group ran out of funding, even negative 4 million VND. I informed the quarantine that tomorrow I will no longer be able to provide any more meals. “It’s very sad, but right before I started, I thought of this situation, but clicked my tongue thinking ‘help you one day or that day'”, she said.