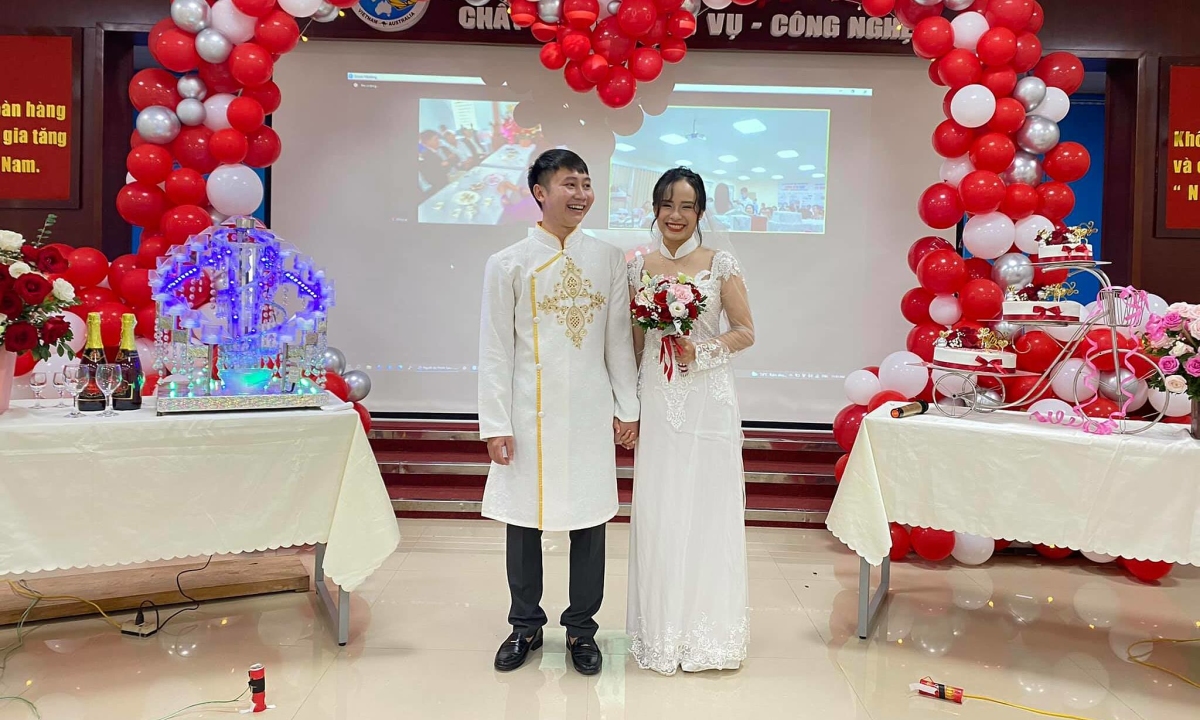 Less than half of November, Phuong Oanh has received five wedding invitations. “Hungry again this month,” sighed the 27-year-old.

Although Covid-19 is showing signs of complications again, her friends of her age are “inviting each other to get married” quite a lot because this year is old and the couples have been waiting for nearly two years.

Usually, weddings will be held at a hotel or restaurant to invite friends and colleagues. But after a month of “opening” and 20 days of announcing the first epidemic level, Hanoi’s disease risk is assessed higher, the number of infections in the community tends to increase.

On November 1, the city issued a regulation that the wedding ceremony should not gather more than 30 people. All five groups changed their plans, only inviting close friends and Oanh was one of 30 people, so there was no way to “hide”. Oanh calculated that four close friends had to celebrate one million dong, one of an old colleague sent 500,000 dong, for a total of 4.5 million dong.

But in the past two months, her income consisted of only 2.8 million dong of unemployment benefits and 2 million dong for writing advertisements. This amount is forced to pay for housing and meals. Young girls often combine breakfast and lunch into one, make more shrimp paste, sesame salt to reduce money to buy food.

But constantly receiving pink cards made Oanh’s austerity plan bankrupt. “I never thought I would fall into this awkward situation,” Oanh said.

Not falling into a money-strapped situation like Phuong Oanh, but Hong Nhung, 26 years old, in Cau Giay is also obsessed with being invited to a wedding. She is afraid to interact with many people after the distance. As soon as she received the card, she did not hesitate to ask how many people she planned to invite to the wedding. “I was shocked when I heard that my best friend planned to make about 60 trays in the countryside, each tray for 6 people,” Nhung said.

Nhung’s psychological state is known by experts of the American Psychological Association as “FOGO syndrome” (Fear of going out). About 30% of Americans surveyed develop this syndrome after life turns to the new normal.

“I’m very afraid to go out or go to crowded places. I always imagine there is some F0 near me. Not to mention a few previous weddings that have recorded positive cases. I am afraid I will become a source of infection for people. family”, Nhung confided. To reduce anxiety, two weddings in October, Hong Nhung sent congratulatory money, ignoring the blame of friends. As for the two intimate groups invited at the end of November, she is looking for a way to evade.

Invited to a wedding by a close friend in Hanoi in November, 28-year-old Hung Anh is still hesitating whether to go or send congratulatory money, as the epidemic levels in many provinces change from hour to hour. Going from Quang Ninh to Hanoi, he was afraid that it would be difficult to go back, when many places in the city turned to level 3 and 4 due to many infections in the community.

“If the place I go to suddenly turns orange and red, returning to Quang Ninh will be very difficult, even having to go to quarantine,” he said. This is also the reason why Hung Anh constantly refuses and sends congratulatory money when receiving a wedding invitation in October.

Weddings during the epidemic make the recipients of the cards awkward, but the situation is not easier for the senders. Many couples have had to postpone or postpone their wedding many times in the past two years, so the general mentality is “if you don’t get married as soon as the epidemic subsides, you won’t know when it will be organized”. It is impossible not to invite friends and relatives to marry for fear of being blamed.

This is true of Hang Thu, 29 years old, in Lang Son. After more than 10 months of waiting, the 29-year-old girl will hold a betrothal ceremony on November 19, two days later. Thu and her husband have twice postponed the wedding schedule.

Initially, the two families planned to order 60 trays, but a week before the wedding day, they withdrew 50 trays because many guests in Hanoi, Thanh Hoa and Bac Ninh messaged that they could not attend. Many people in Lang Son are also afraid of the epidemic and apologize for not coming.

Afraid of being lost, every time I send a Autumn card, I ask the guests in advance if they can come. Some people answered emphatically, but others still hummed, speaking depending on the situation of the epidemic. In addition, the new bride is always afraid that the locality will suddenly issue a regulation to limit guests to less than 30 people like Hanoi, if new infections are recorded.

Understanding this dilemma, Nhu Thanh, 27 years old, from Ba Dinh district held a family engagement and bride procession ceremony. At the beginning of November, a party was held to invite guests, but so far the two families have delayed the schedule. “It is best to postpone until the Lunar New Year or when the epidemic situation is stable, then do it,” she said.

Oanh personally plans to borrow 3 million VND to pay for her house and living expenses because she has spent nearly 5 million dong on money to celebrate the wedding. She calculates that next time, if she receives invitations from those who are not close, she will notify them not to come so that they can reduce the number of gifts and send a congratulatory message of 200,000 VND.

“Many people can see little but that’s beyond my ability,” Oanh said.