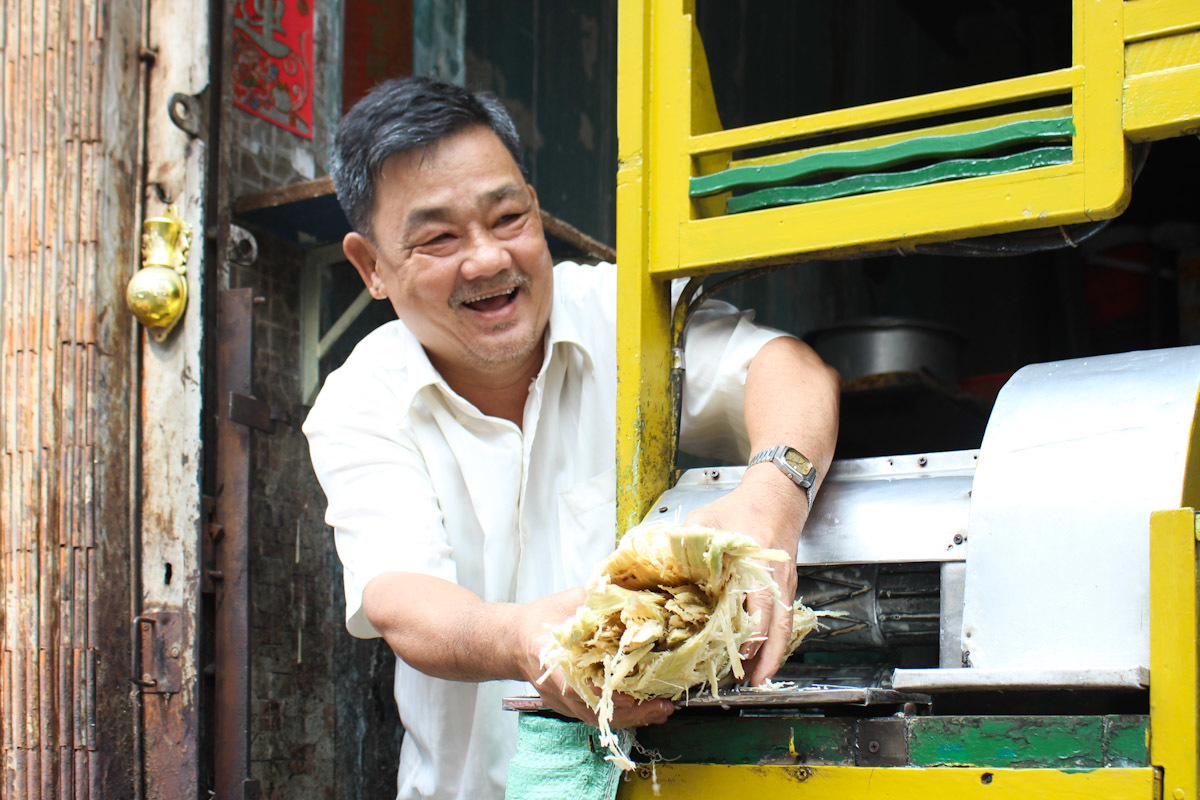 HCMCThe sugar cane shop on Co Giang Street (District 1) of Mr. Ly Tung’s family has been passed down from his grandfather’s life, when he still pressed sugar cane juice with a stone mortar and buffalo.

“I named the shop Kien Ky to commemorate my father Kien’s name. The Chinese signature is often understood as the name of the word ‘shop’, it also shows luck and convenience in business” The 65-year-old man explained and added that the family’s cane-crushing car was nearly his age.

Mr. Tung’s grandfather was a farmer living in China. Around the 1940s, this family went to Vietnam to avoid the Sino-Japanese war. They stopped in the area of ​​Co Giang Street today to make a career, because there is a busy market, there is a canal in front of it, and convenient traffic.

Mr. Tung was told by his father. At that time, in order to have sugarcane juice to sell, his grandfather used a large stone mill similar to a soybean mill, for the buffalo to pull around to press. After that, family members catch each big bucket and bring it to the front door of the house to sell.

“At the age of six, my father drove me by bicycle to a machinery store across from the Big Market to buy an electric motor-driven sugar cane juice truck. I still remember how happy my father was that day,” Tung reminisced.

According to his father who sold sugarcane juice from a young age, Mr. Tung is the only one of the four children to succeed the family. Up to now, he has never tried an apprenticeship or changed to trading anything else because this cane juice car is enough to support all family members for three generations.

“In the past, this cane juice car helped my family not only have enough to live but also have a surplus,” said Mr. Tung.

Years after the reunification of the country, the sugarcane juice cart of Mr. Tung’s family is famous throughout District 1. On hot summer days, Mr. Tung and his wife grind sugarcane juice in time. Open for sale all day, but the most crowded time is still evenings, when cyclo drivers and workers finish a working day. Dozens of cyclo drivers line up along the street in front of the shop, holding a large mug to wait to buy sugarcane juice.

“Many people told me, working all day tired but at night to drink a cup of sugarcane juice, eat more loaves of bread, I would feel as healthy as the morning. I wish I had a camera to capture the scene of the cyclo. follow each other, “Tung recalled.

Having tried to put oranges and tangerines in sugarcane to squeeze together, although it is very fragrant, the taste is more delicious, but it does not suit the taste of familiar customers, so now, he only presses pure sugarcane juice.

The secret to having a delicious glass of cane juice, in addition to pressing the type of sugarcane, depends on the family’s “unique” press. The machine over 60 years old includes two pure aluminum blocks, pressing 5-6 cane at the same time.

“The machine must be strong, pressed until dry. The delicious, delicious and fatty taste of cane juice depends a little on the amount of water pressed at the last time,” he said. Because of that, he never intended to replace the father’s old cane juice car with a modern press.

“Although old and cumbersome, this can reflect the size of the shop, the scale of a profession,” he said.