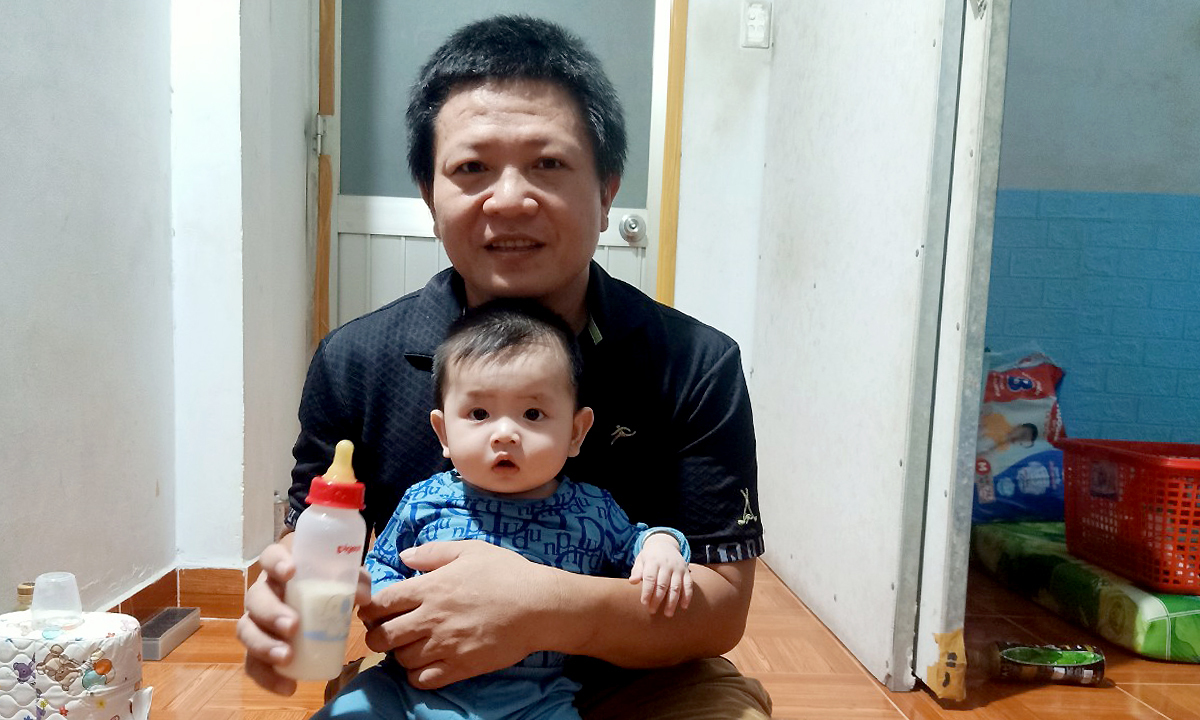 Ho Chi Minh CityFor nearly a month now, Mr. Huynh Thanh Hau started his life as a “baby-raising rooster” by training his 7-month-old baby to drink from a bottle.

Not only that, every day he has to get up early to do laundry and prepare food for his 13-year-old son. These things are not difficult, but there are two things that make the 39-year-old man, from Binh Hung Hoa B ward, Binh Tan district feel confused: Not knowing the vaccination schedule of his young children and even less knowing how to teach his older children to learn. star.

On August 23, nine out of 10 members of his family received positive test results for nCoV. Mr. Hau followed his mother-in-law to the hospital, while the others were treated at home. Every day he called back, he still saw his wife cooking and taking care of children, but one morning in early September received news that his wife had died.

The family is still in the process of being treated for Covid-19, so the 7-month-old baby has to ask a neighbor to take care of her. The day he picked up his son, the boy refused to follow anyone. The child cried, the father could not comfort it, put the baby in the crib to let it cry and then sleep. “His brother was so sad, he ran up to comfort him, fortunately the baby kept quiet”, Mr. Hau said.

After learning how to bottle feed, Hau has been learning from his cousin how to make baby food for a few days. Unable to help his eldest son with his homework, he could only occasionally visit his room when his son was studying online as if to encourage him.

The money in the house is almost exhausted, Hau cannot ask his grandparents to take care of him to go to work. After being infected with Covid-19, both of them were very weak. He plans to wait until the child is full year before sending the child. But where to get the money to live in the next few months is an unanswered question.

“It’s hard for a rooster to raise chicks,” he sighed.

In Vietnam, there are no accurate statistics on the number of families who have lost a spouse to Covid-19, falling into the same situation as Mr. In the fourth wave of epidemics, Ho Chi Minh City had nearly 400,000 infected people and 14,000 deaths. The Ho Chi Minh City Department of Education and Training said that about 1,500 students lost a parent during the recent epidemic. It can be seen that the number of families losing their breadwinner in the largest economic center in the country will reach thousands.

“Covid-19 is a devastating machine for families, each outbreak can create unprecedented numbers of widows around the world,” reports the Global Fund for Widows, a non-profit organization. Profit is based in New York, written in May 2020.

The report asserts, besides the pain of losing her husband, the people left behind will have to struggle to rebuild their lives. However, with one person’s strength, this does not seem to be that simple.

Ms. Vo Thi Ngoc Ha from Tan Thoi Nhat Ward, District 12 admits that carrying the family alone is a very heavy task. “He passed away like the sky was falling,” Ha said. The only reason holding her back is her two children, 13 and 18 years old.

Over the years, her husband has been the breadwinner of the whole family. He takes care of the economy, his wife only picks up and takes care of the children. “When his eldest son was under pressure to study, he brought his mother and daughter to Tay Ninh, alone in the city,” Ha told a story four years ago.

When the epidemic hit, Ms. Ha despite the danger of driving her two children by motorbike to Saigon, in the middle of the epidemic peak at the end of July. The couple had been together for more than a dozen days, then he passed away.

Ms. Ha started to take on the position of breadwinner of the family from the smallest thing, going to the market to buy food every morning. Losing her husband means that her family will lose income, so she will have to go to work here. A friend applied for the job check tickets but only start going to work when the city is fully open. The story of raising an older son also caused her a headache. “The boy used to only listen to his father, now his mother talks when he listens and sometimes doesn’t. I am asking a colleague of my husband’s to come talk to him,” she confided.

In some countries, people who have lost their spouses to Covid-19 have found ways to connect with each other. In the US, there is a Facebook group that gathers thousands of people, where they share sudden separations, no-show funerals, economic worries or single parenting. In India or Indonesia, there are organizations that provide psychological support and help those who have lost their spouses to earn a living. Governments of other countries have also stepped in to support this group to stabilize their lives.

According to Associate Professor of Anthropology and Sociology Nguyen Duc Loc, Director of the Institute for Social Life Research, “Families who suddenly lose their spouses become a social problem and the consequences can last for a few days. decade”.

Ho Chi Minh City is gradually opening up. It seems that most of the attention is focused on plans for economic recovery and reconstruction of social infrastructure to ensure the ability to adapt and live with the epidemic. But in another aspect, the pandemic also affects each family unit, wife losing husband, husband losing wife, children losing parents.

Mr. Loc said that the issue of social security, ensuring livelihoods for these situations should be on the agenda as a priority no less than other priorities when implementing the recovery plan. The proposed solutions should pay attention to the perception and behavioral patterns of each population group. The policy should not only be reduced to simply supporting financial packages, but also needs to be supported and accompanied by psychologists and family social workers.

“It is necessary to put them in the context of the community they live in so that they can quickly adapt to the recovery period of society. That is the support. sustainable,” said the associate professor.