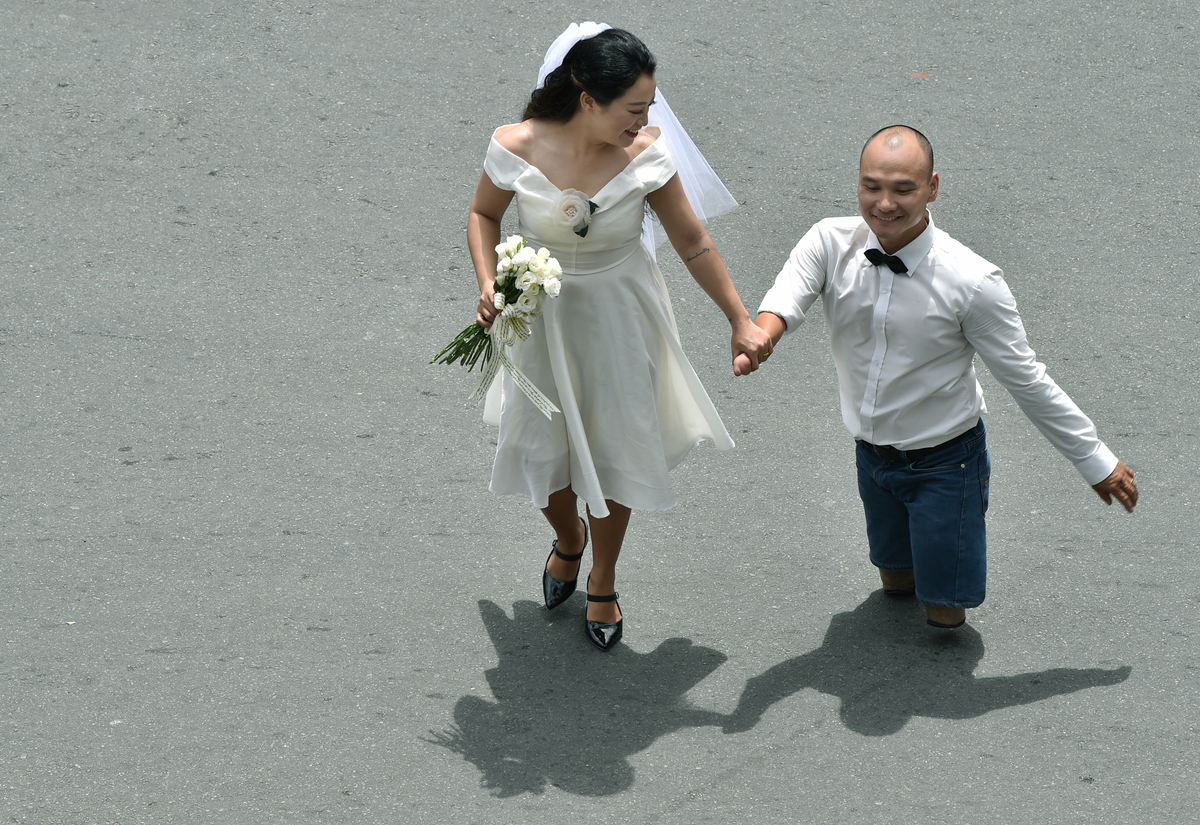 HCMCBorn without legs and abandoned by her biological father, Hong Loi determined not to love and get married, but the “fateful” coffee session two years ago turned everything upside down.

A small shop in a quiet alley in Hiep Binh Phuoc ward, Thu Duc district, is full of handmade dresses and flower brooches designed by Phan Thi Tuong Nghia, 27 years old. Her husband, Nguyen Hong Loi, 33 years old, spreads a white dress on the table straightened. Young couple sitting in a chair, holding a paintbrush. They start the day by perfecting the flower of a flower to decorate the shirt.

Tuong Nghia is known as a young female designer with impressive handmade Ao Dai collections. Hong Loi is also famous among disabled swimmers and has won many medals. The guy was born with “no legs” and only has a healthy left hand, living in Hoa Binh Village – Tu Du Hospital since childhood. Earlier this October, the couple officially went to the same house.

Two years ago, Tuong Nghia met Hong Loi at the launch of his first hand-embroidered collection of ao dai on scarf material. Initially, the young female designer glimpsed among the guests there was a handsome guy but only sat at the table. When the exhibition was about to end, the new girl saw him walking with only half feet and was immediately impressed with his distinctive appearance.

About a month later, Tuong Nghia happened to see Loi’s personal Facebook page appeared, so he actively made friends. After chatting online, they decided to meet for coffee. To go to the first “date”, Nghia took the initiative to drive a motorbike from Thu Duc to Hoa Binh Village in District 1. “During the nearly 8km journey on the streets of Saigon that day, for the first time I was able to take a single circuit. I did not have to stop waiting for the red light to stop waiting for the red light. At that time I felt like this meeting was special, “Nghia recalls.

That first appointment lasted up to 4 hours. Not planning to love and marry anyone, the boy talks like a brother sharing with his juniors about his work, especially in the field of drawing art ao dai. Tuong Nghia also considers Loi as a brother. She frankly talked about herself, her past love affairs and her dreams.

“Walking next to him can see that although his body is defective, he is always humorous and optimistic. I have even more admiration when I know that he can draw ao dai with one left hand”, Tuong Nghia said.

The first Tet we met, Tuong Nghia invited Loi to his hometown in Kon Tum to play, but he refused. “I am not afraid of what others say to make me sad, but I am afraid that the gossip will make my family sad why I let the daughter know a ‘dead boy” like me. On Tet, I don’t want your family to have to think, ”the young man explained.

When they get to know each other, neither of them says that they have feelings for each other, but they always feel very attached. Almost every day the couple see each other, except when they are busy at work. Once she heard Nghia share about her biggest dream, that she would have a shop, sell her own things, then invite her parents in the countryside to visit and take a photo with them. A girl does not wish to have a beautiful house, a luxury car or a rich husband, which makes Loi even more fond of her. Having been rejected by his father at birth, living by the love of everyone in Hoa Binh Village, Loi also wished he had a happy moment with his family like Nghia. At that moment, he said to himself: “Okay, I’ll make that dream together with you”.

Nghia does not mention but her siblings and parents in the countryside still know the relationship of the two. Once back home, her father asked: “Are you acquainted with a disabled person? Nghia answered:” Yes. “She saw her father cry, but he did not object.

“I don’t know whether he cried because he loved his daughter, or loved Mr. Loi. I just told him that he was happy with his choice, he is my best choice right now”, Nghia said.

Last Tet holiday, after the small store had been opened for a while. The two sides of the family knew about the couple, at this time Loi went to Kon Tum to celebrate Tet with his girlfriend’s family. The guy who was previously confident and optimistic is suddenly nervous.

On the morning of the 28th of Tet, the atmosphere in the Central Highlands was warm. Loi first set foot down in front of his lover’s door. He heard Nghia’s voice call out and her parents came out from the house with a welcoming smile. Loi was touched, feeling like a family was waiting for him. A feeling that he had never experienced before.

“During a week of Tet with the whole family, Nghia’s parents never asked about my legs and arms. Everyone treats me like a child. I know this will be my family, helping me to be motivated. to try, “said a young man from Saigon.

On 10/10, the young couple held a wedding. At the wedding party, the bride Tuong Nghia appeared alone from the back of the hall, walking towards the stage while singing the song “Night song” with the words “flowery” to say for her heart to the groom: “Situation, please come back. Add love together. Love is still up and running, please keep asking for love. Join me in a passionate kiss“.

On stage, the bridegroom Hong Loi wears fake legs, wears a suit, and wears roses. He came to pick up his bride with short steps. The man who thought he would not love or get married two years ago had to take off his glasses because he was afraid that when he saw the loved ones below, he would cry. But listening to the song, the young man lowered his face, tears in his eyes. Beside him, the young wife sang the last part, her eyes sparkling.

As a brother, a friend who has known Hong Loi for ten years now, when he knew that the two of them were destined, singer Nguyen Phi Hung composed a song for them and sang it at the party. The male singer shared: “We often search for fairy things in life, but not far away, the love story of the two of you is a proof. To create this miracle, the woman is Tuong. Meaning must have an extremely large, human and profound heart “.

“Perhaps with Tuong Nghia, this wedding, this life, this husband are the most wonderful and wonderful things that Nghia ever wished,” said the bride, in front of her family and friends. I then joined my husband’s arm to congratulate the wine.