It has been 2 years since the last time the wheels rolled on Circuit of The Americas (COTA), due to the complicated Covid-19 season, the race was canceled. 2021 is witnessing hotter competition than ever, Red Bull has never won here and aims to win, but Mercedes has never given up easily.

Red Bull always knows where it is at a disadvantage, Sochi is a prime example of the racetracks that are considered ‘strongholds’ of Mercedes. Coming to COTA is also a similar place, because the German team has dominated here in the Hybrid era since 2014 until now, only Ferrari has broken their brake circuit only once in 2018.

The team from Austria has real reason to be concerned, as the speed of their opponent’s W12 on a straight track at the moment is very hard to beat, and remember, in Austin there is a straight line up to 1, 1km – that will be a big advantage for “Silver Arrow”.

While Red Bull has always had podium, they haven’t won at COTA in this era. And this doesn’t stop them from setting their ambition to win the weekend, as a self-affirmation. The leading driver Verstappen understands that the opponent is accelerating in recent races, but not because of that, the determination has decreased.

The Dutch driver, despite being under great pressure when leading his opponent by only 6 points, is still confident in the opportunity at Austin this weekend. It’s not easy, because Verstappen is on the podium, but if you look closely, this racer has never come close to winning! So it won’t be easy for Red Bull to get a weekend win.

More than ever, this is the time when Mercedes puts all their efforts into Hamilton to ensure the top of the individual rankings. Although he is the driver with the most victories in Austin, it should be noted that in the last 2 races he did not win.

Mercedes since the race in the UK has made significant improvements from car performance. Opponent Red Bull has “looked” very closely, and they are trying to explain but failed. Although the German team’s engine performance has not improved, it is clear that the aerodynamic package applied from Silverstone, with a low floor design philosophy, is showing strength on their straight line at the present time. in.

The loss of many points to Verstappen in Turkey made once again the defending champion was left 6 points behind the opponent. The pressure to win has not been great since 2014 to now, creating a favorable momentum for Hamilton. The 2021 season is another story, with the rise of Red Bull, Mercedes prone to mistakes, or forced to take risks with risks will always be an unknown that has a significant impact on the ‘final solution of the equation’. !!!

In many years, there has never been a season where the competition was so close. Before the last 6 races of the season, the champion could not be identified, and if not too surprising, Abu Dhabi would probably be the final race in the true sense. Hamilton has a lot of advantages, but beware Verstappen and Red Bull can make a turning!? The problem now may not be about winning, but not losing too many points compared to the opponent – if it is impossible to win!? Another battle for the top 3, McLaren vs Ferrari.

In Italy and Russia, McLaren almost escaped in the top 3 fight with Ferrari, when they won 1-2 at Monza and lacked luck to beat Sochi. But to Turkey, they showed signs of ‘short of breath’ for the opponent to narrow the gap to 7.5 points.

Perhaps McLaren’s problem lies in the fact that, except in Italy where they won 1-2, at each specific moment their drivers are not in the same form. The first half of the season was a sublime Norris, accompanied by an unaccustomed Ricciardo. Going to stage 2, both riders showed erratic behavior, for every driver with good results, the other driver was poor, leading to a lack of overall stability in their performance.

Ferrai is no better, like the competition, they also have not maintained a consistent record – there are races where they cannot compete with the opponent.

The Italian racing team gets improvements after the engine upgrade package comes with valuable points. A Sainz is proving more and more brave, and Austin is where this racer always has a good record. Ferrari aims to level the gap with rivals in the US race!

The biggest disadvantage at the moment is that, the Binotto team leader will miss at least 2 of the 6 final races of the season to return to the factory in Maranello to focus on developing for the 2022 season. Although the replacements have been and will be. complete the mission, but when the battle is intense, the presence of the ‘captain’ is always of great value!!!

In terms of rivalry, how hot is the battle for the throne, the top 3 teammates are equally fierce, McLaren vs Ferrari always creates an attraction in the top of the race, not only with themselves, but a lot of them. different opponents. Alpine has many advantages to finish in the top 5.

Turkey is not where Alpine is successful, anyway the score between them and AlphaTauri is still 12 points. More importantly, except for the top 4 racing teams, it is the two drivers of this French team who are the most successful drivers in the visits to Austin in the latter group. Perhaps once again, Alpine will widen the score gap with the opponent – and the way they increase the gap is not the high position, but the presence of both drivers to score!?

Aston Martin will not have many opportunities to improve the position, because the main opponent now is AlphaTauri with a stable Gasly. If it continues as it is, the top 6 race between these two teams will soon end, no matter how much Vettel tries, it will not be easy to level the gap of 31 points behind the Italian Red Bull racing team.

Similarly, at the bottom of the rankings, it seems that everything is in order, Williams will be in 8th place. Raikkonen will still continue to score, but it will not be enough for Alfa Romeo to usurp the opponent. At least they will still rank above a weak Haas – the team certainly aims to score points to avoid a empty season, if doing so at ‘home’ will be an incentive, but this is unlikely to be achieved. realistic!

Unites States GP 2021 will certainly take place as unpredictable as the past races of the season. Hamilton will be determined to defend the stronghold of Mercedes! Verstappen will try to limit the loss of points, and if lucky, maybe this driver will have his first time…!? All will be in Austin this weekend, the US GP will start with the qualifying race at 4:00 p.m. on Sunday, October 24, and the main race at 2:00 a.m. on Monday, October 25, 2021. 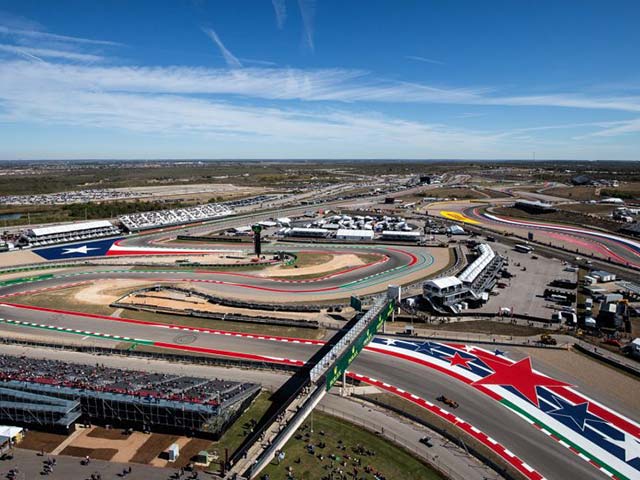 (F1 racing news) After a 2-year absence, the drivers returned to Austin, Texas for the USGP race. And the 2021 season is slowly coming to an end…