(Sports news, F1 racing news) The COTA racecourse has always been a favorite destination of Mercedes in the turbo hybrid era as they have not “dropped” the pole here since 2014. Yet, the series of Indian performances The image of “bulls” since FP2 has helped them “overthrow” that unbeaten record to create a great advantage before stage 17 this season.

FP3: Perez and Red Bul take the lead once again

Sergio Perez once again took first place at the final test run of the US GP race in 2021, while both champion candidates Max Verstappen and Lewis Hamilton were not counted as best results due to running over the road limit. race. FP3 opened with high temperatures and strong winds, which greatly hindered the performance of the riders. When the weather conditions are better, the road surface has more grip so that the fastest achievement is continuously established.

Perez achieved 1 minute 34.701s to take the first place, followed by a surprise Carlos Sainz (Ferrari) was 0.104s slower and Verstappen ranked 3rd, not having the best run with many obstacles. Hamilton is only ranked 6th and is also a “victim” of track limits at turn 9. Above are Lando Norris (McLaren) and Valtteri Bottas (Mercedes). Daniel Ricciardo and Pierre Gasly took the next two places while Charles Leclerc and Esteban Ocon finished the top 10 for this run.

Following the excitement after 2 consecutive leading sessions, Red Bull confidently entered the important qualifying run, especially in the context of Bottas being fined 5 places for replacing the 6th internal combustion engine of the season. “Bull” had a good start from Q1 after 2 laps, Verstappen and Perez respectively occupied the top 2 rankings, but the difference in achievement between them was only 0.017s. But in the last seconds, Leclerc rose to P1 with a result of 1 minute 34,153s. 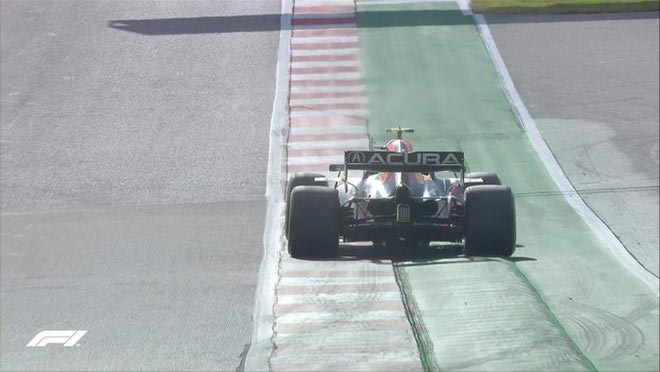 The car that runs out of the track at turns 9, 19 will have its achievement cleared

Following the duo of Red Bull is “home” McLaren with Ricciardo ranked above Norris also thanks to the effort in the second time round. Sainz and Gasly also have improved in performance to push the two steering wheels of the falling “silver arrow” down to P8 and P9. Meanwhile, Sebastian Vettel, one of the drivers who received a penalty for replacing the engine with a new one and must definitely start at the end of the race, had a “walk” with a relaxed mentality, ranked 10th in the race. Q1.

Unfortunately, his teammate at Aston Martin, Lance Stroll was eliminated when the achievement was only enough to stand at P16. Accompanying him is fellow driver Nicholas Latifi (Williams), “snowman” Kimi Raikkonen (Alfa Romeo) ranked 18th while teammate Antonio Giovinazzi “escape” with P15 and made a mistake in the final time round. . The two “bottom” positions as usual belong to Mick Schumacher and Nikita Mazepin of the home team Haas. 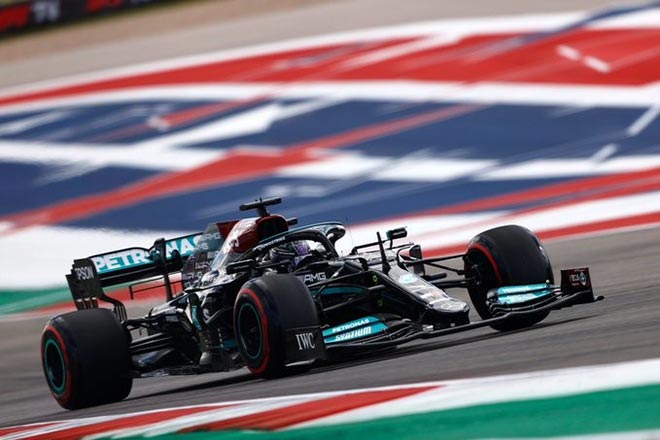 Mercedes has many disadvantages with 2nd and 9th positions

By Q2, where the main race starting strategy is taken into account, the difference in tire selection is evident. Mercedes left the first pit – Bottas ran ahead of Hamilton – on Medium tires, as did Red Bull, McLaren and Leclerc, while Sainz ran Soft tires.

Verstappen was the fastest after the first round of timers, 1 minute 33.464s created a difference of 0.3s more than the opponents behind. However, they were at a disadvantage when Perez was cleared for running over the limit (white line) in turn 19, along with Ricciardo forced to do it again if they wanted to enter the top 10. Hamilton P2 and Norris continued to have high form. with P3.

The pressure to succeed in a single round was on the Mexican driver and he had a ‘just enough’ record to get to Q3 (despite losing to Verstappen by 0.714s). Ricciardo was more than 0.4s slower than Perez, ranked 9th, but was also fortunate to reach Q3 because the opponents behind could not significantly improve their performance. Behind the top 3, Ferrari occupied P4 and P6 respectively (Sainz switched to Medium tires and achieved better results), between them was Bottas. AlphaTauri’s duo were the last names in the top 10, with the last round effort helping rookie Yuki Tsunoda get P10. Of the 5 drivers eliminated in Q2, up to 3 people were sure to start last, including Vettel, Fernando Alonso and George Russell. The other two names are Ocon (P11) and Giovinazzi, who is expected to start P12 in the main race.

Difficult conditions at the start of the decisive Q3 run with wind speeds up to nearly 20 km/h. It seemed that Mercedes were the more affected as they were completely beaten by Red Bull in the first round. Perez continued to be in extremely high form when temporarily rising to the top with a record of 1 minute 33.180s, just 0.019s faster than his teammate in P2. Mercedes occupies the next 2 positions but the gap is nearly 0.3s, followed by Ferrari, McLaren and AlphaTauri respectively. 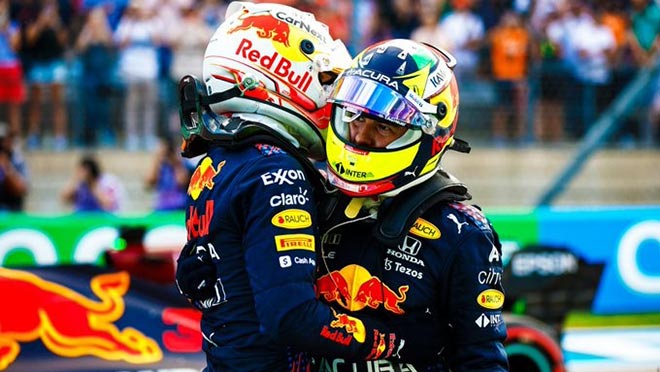 Hamilton showed his class in the final time round, improving more than 0.3s to temporarily occupy first place. But only 1 minute later, although it started to rain lightly in the last seconds, Verstappen and Red Bull reclaimed with a 1 minute 32,910s lap to win the 8th pole in the last 11 races, pushing the opponent down to 2nd place. Perez only got P3 unfortunately, but he will be an important factor for the “bull butt” in tomorrow’s race. Bottas ranked 4th, will be fined 5 steps to 9th. Thanks to that, the duo Ferrari and McLaren and Gasly were pushed to 1 starting place for the US GP race. Tsunoda is the slowest out of 10 drivers in this Q3.

The main race promises to be very tense and exciting when the two championship candidates start first, watch it at 2 am on Monday, October 25 on K + Sport 2 channel.

Detailed results of the US GP 2021 qualifying run: It has been 2 years since the last time the wheels rolled on Circuit of The Americas (COTA), due to the complicated Covid-19 season, the…

The hottest sport on the morning of November 26: Djokovic was biased by ATP to avoid being eliminated

Red color fills Tottenham Hotspur Stadium: When a healthy lifestyle is associated with the king sport!

How does hot girl Trang Le practice to have a third round of approximately 100 cm?