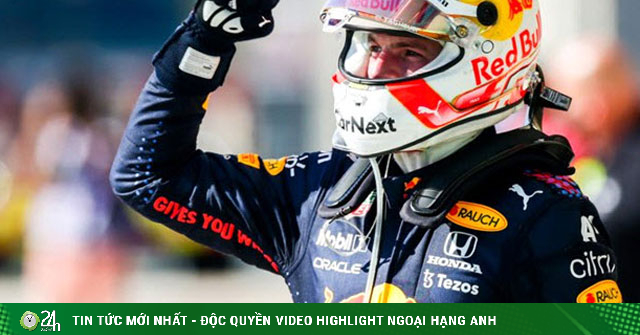 (Sports news, F1 racing news) Max Verstappen won a spectacular victory over rival Lewis Hamilton, ending Mercerdes’ dominance at COTA, and at the same time raising the gap on the rankings to 12 points.

Video of US GP leg:

Race day has arrived and a clear afternoon awaits the racers at Circuit of the Americas. The stands were packed with more than 140,000 thousand people watching the race on October 24. The number of spectators accompanying the US GP for 3 days has exceeded 400,000 thousand people. And all are looking forward to the upcoming developments here.

The stands are filled with fans

The national anthem and the We Race As One campaign were performed before the race. Gasly had an engine problem and the technical team gathered around the French driver’s car to try to fix it. AlphaTauri was able to start Gasly’s car and he was able to start normally.

All started on Medium tires, with the exception of Sainz and Tsunoda, two racers in the top 10 using Soft tires. Verstappen started the warm-up lap, completed one lap in 37-degree weather and returned to position. Russell was the last driver to reach the starting area, and all were waiting for the signal to appear about to appear. 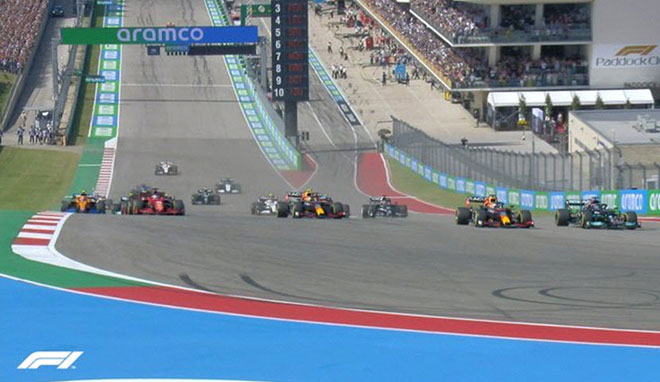 Hamilton excelled in the starting situation

Verstappen tried to stop Hamilton as soon as the signal to start. But after the situation was forced back, the Dutch driver had to run outside the run-off area at corner 1 and Hamilton rose to the top of the US GP.

An intense showdown between McLaren and Ferrari is also underway. Ricciardo rose to 5th place after Norris and Sainz forced each other out of the run-off zone. Lafiti collided with Stroll and fell 19th, on the other hand Russell moved up to 14th after the start. Tension in the first minutes between McLaren and Ferrari

Bottas, after overtaking the AlphaTauri, made a mistake, and returned to 10th place. Ocon entered the pit to replace a new spoiler due to a collision with an Alfa Romeo.

Round 5, Verstappen got closer and closer to Hamilton, Pérez fell further behind the two leading drivers. Lafiti was also called into the pit to get a new wing, and almost collided with Ocon at the exit. 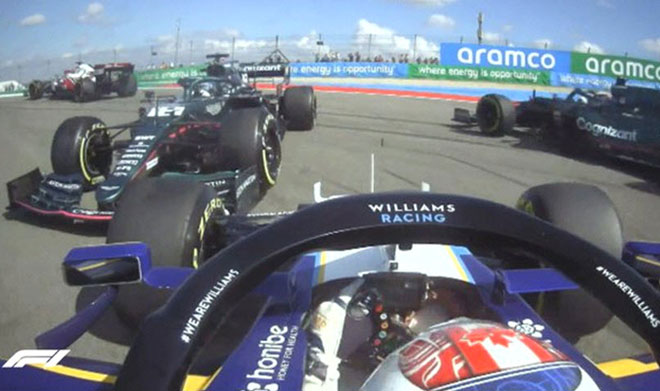 Accident at the beginning of the race between Lafiti and Stroll

Round 11, Verstappen entered the pit after complaining that the tires were overheating. Pérez also pitted the next round, decided to continue using Medium tires, and ready to double undercut Hamilton. That forced Hamilton into the pit, and returned six seconds behind Verstappen. Red Bull continues to lead the race. Round 16, Gasly was the first to stop racing at the US GP. Pity the French driver. Räikkönen and Alonso had a “fight” situation at turn 1, the two cars collided. Vettel entered the pit, returned to 15th place with another set of Medium tires. Round 19, Tsunoda and Bottas overcame Stroll. The Canadian racer entered the pit later and put Giovinazzi in the top 10.

Bottas with DRS overtook Tsunoda easily, and moved up to 8th. Round 22, Alonso overtook Giovinazzi after the two Alfas swapped places. Alpine driver must return to position after a “sensitive” overtaking situation.

Not long after that, it happened again, but this time it was Giovinazzi who took the lead. The Italian driver also had to return the position afterwards.

Round 27, Norris shortened the distance with Sainz to 3.7 seconds. Hamilton now has about 2.7 seconds to the top. The Virtual Safety car was used for a short period of time to allow race staff to recover a piece of debris from the previous collision between Räikkönen and Alonso. Meanwhile, Pérez had problems with the drinking water system on the 39-degree track. Round 30, Verstappen entered the pit and continued to use Hard tires. Sainz entered the pit, a tire that refused to come off slowed him down and the Ferrari driver returned to 8th. Pérez pitted the next lap and changed to a Hard tyre. Both McLarens entered the pit afterwards. Followed by Leclerc and Tsunoda, returning to 4th and 11th place respectively with Hard tires.

Bottas entered the pit next round, using another set of Hard tires. Round 37, Hamilton entered the pit for the second time, changed to a new Hard tire in 2.4 seconds of stopping, and continued the race 7.8 seconds behind Verstappen.

Round 41, there are only 15 laps left and the distance of 8.1 seconds Hamilton needs to shorten. Sainz with DRS tries to get past Ricciardo but not enough to get ahead. Both Alpines failed to finish the race

Round 42, Ocon was called to the pit by Alpine and had to stop the race. Pity for 2 French drivers. Round 45, Verstappen and Hamilton did not have to meet anyone but each other until they crossed the final finish line.

Round 49, Bottas’ tires seem to be reaching the limit. The Finnish driver fell behind in the fight for 6th place with Sainz. Is this information alarming to Hamilton, when the reigning champion’s tires are only 2 laps newer than his teammates. Hamilton could not close the gap with Verstappen

Alonso also stopped the race after 51 laps. Alpine is completely eliminated from the US GP. Räikkönen slipped into the gravel at round 6 and Vettel was promoted to the top 10.

The gap fluctuated between Hamilton and Verstappen but could not fall below 0.8 seconds. And just like that, the defending champion could not come close. 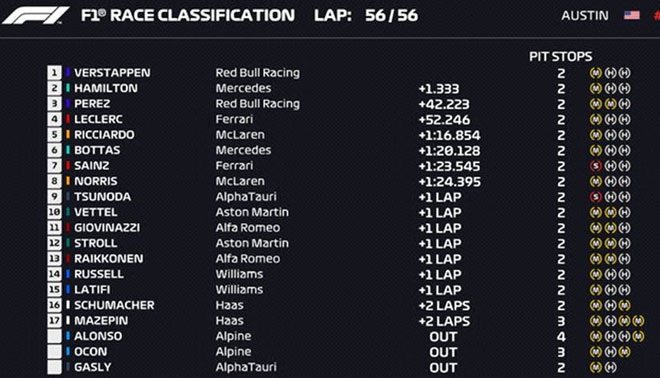 Verstappen crossed the finish line, winning the US GP by 0.8 seconds over Hamilton in second place.

Pérez held on to 3rd place for most of the race. Leclerc was 4th, Ricciardo 5th. Bottas in the final round overtook Sainz for 6th. Norris 8th, Tsunoda 9th and Vettel finished last in the top 10 thanks to Räikkönen’s slip. The trophy was prominently transported by Shaq

Shaquille O’Neal attended the awards ceremony and personally presented the trophy to Verstappen. McLaren currently leads Ferrari in 3rd place with a distance of 3.5 points. And Verstappen leads the standings with a gap of 12 points over Hamilton.

Pérez has been well received at the Circuit of the Americas, and things will be even more exciting in the Mexican driver’s home country. Red Bull got his 73rd win and 200th podium thanks to Verstappen’s win. 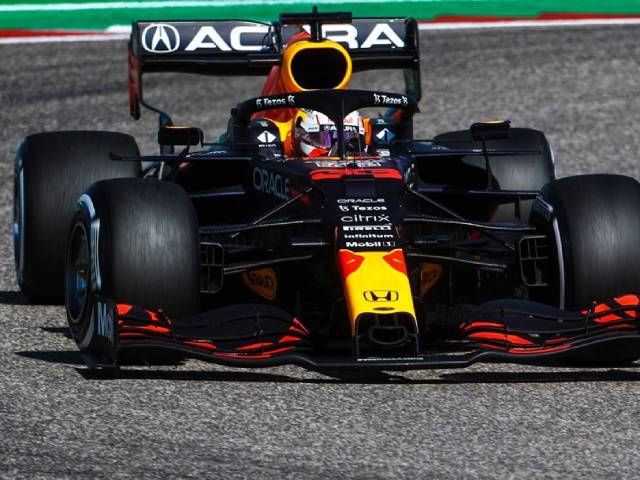 (Sports News – F1 Racing News) Throughout the US GP 2021 is a tactical psychological battle between Red Bull and Mercedes. “Cow…