(Sports news, F1 racing news) It has been more than a decade since F1 last visited Imola racecourse and organized a race. Because of that, the return this time makes all the racers strive to be a part of the history of the racetrack as well as the tournament.

Here are the most notable numbers at the 3rd race in Italy in 2020.

In the 75th leg starting for Mercedes, Valtteri Bottas won the 15th pole (for the German racing team) in his career and was the first of his personal pole with the “silver arrow” at Imola.

In the past, he had converted 5 out of 14 poles into the final victory. Lewis Hamilton ranked No. 2, bringing the 74th leg of the first Mercedes “lock” in history. Hamilton has always ranked 1st, or 2nd in all Q3 runs this year.

The “silver arrow” dominates F1 for the seventh consecutive year

Max Verstappen (Red Bull) had 6th out of the last 10 races, ranked third. Meanwhile, another driver of the “bullshit”, excellent Pierre Gasly got 4th place, being the highest ranking. for AlphaTauri since Sebastian Vettel won the pole for them (then Toro Rosso) at Monza in 2008.

The Italian team, which has officially confirmed Gasly for the 2021 season, has never been in the top four Saturday at any other races since their time as Minardi.

4th place is the best ranking achievement of the French driver, when he ever got at Red Bull in the German GP stage 2019. Team-mate Daniil Kvyat entered Q3 for the second time in the last 28 races, last time was in Mexico City 2019.

Daniel Ricciardo (Renault) has the fourth start in the top 5 this season with 5th place. Ricciardo is above teammate Esteban Ocon (12th) for the 11th consecutive leg. Mercedes set a world record for the number of consecutive championships

Charles Leclerc started 7th, the last time he was in this position was at the Austrian GP 2020, where he finished second. At McLaren, Lando Norris for the second time ranked above Carlos Sainz in the last 8 legs.

Sergio Perez (Racing Point) for the first time this year (in dry weather) was eliminated from Q2 when he lost only his 10th record by 0.01 seconds. George Russell (Williams) maintained his performance for the 8th time in Q2, and had the second leg in a row above Vettel (Ferrari) when the German driver’s fastest lap was removed due to running over the limit of the track. . Vettel was eliminated in Q2 for the 9th consecutive leg.

Hamilton had his 72nd win for Mercedes, equalizing the performance that the legendary Schumacher contributed to Ferrari, the record for the most victories alongside an F1 team in history.

Imola is also the 29th F1 race (F1 record) that Hamilton has at least 1 career victory. The British rider has reached the top 5000 laps in the Imola race and he will be able to win the final this season in the next leg in Turkey with only 104 points left in the remaining 4 races and the distance with Bottas is at 85 points. 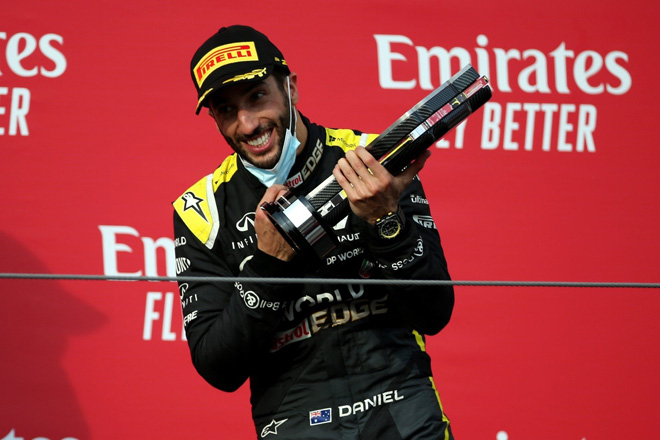 Podium is second in three races for Ricciardo and Renault

Bottas led the first round in 4 of the last 5 races, but he was only crowned in the race where he did not lead in Sochi, Russia. Thus, Bottas’s failure made the Finnish drivers through the ages still unable to be crowned at the race in Italy.

Mercedes has officially won the world championship for the 7th time in a row and is also sure that the individual championship title will belong to one of the two team riders for the seventh consecutive season. This is an unbelievable birth gift for Mercedes’ chief engineer officer, Andrew Shovlin, who turned 47 on Sunday. Mercedes-Benz has 500th podium as an engine supplier in F1 history.

Ricciardo for the second time in the last 3 races reached the third finish and won the podium, after a period of two and a half years of absence from the top 3. The Australian driver scored for the seventh consecutive leg, bringing Renault to third place on the table. racing team. Kvyat has done his best this season with 4th place

Leclerc and Ferrari scored for the 5th consecutive leg and are in the top 5 individual rankings. Perez was 6th, he would have had podium if he hadn’t pitied the last time the safety vehicle appeared, and caused the “pink alarm” to be surpassed by Renault.

McLaren scored with both cars for the first time since the first race took place in Italy this year, Monza, 4 races ago.

Kimi Raikkonen and Antonio Giovinazzi both score for Alfa Romeo for the first time in 2020 and since the last time at Brazilian GP 2019, where they have earned 22 points as two cars make it to the top 5. Giovinazzi has become the fifth driver 2 in history racing at home 3 different times in the same year (after Eddie Cheever in the US in 1982). Verstappen has gone through 12 stages this year with only two results, either finishing for podium or having to receive DNF. Gasly also met a similar situation, he started 3 stages in Italy but only won (1 time) or had to give up (2 times).

Nicholas Latifi for the third time this season finished 11th and could not score. His teammate Russell is empty-handed this season, he is ranked 10th in a car crash behind the car.