The second Sprint qualifying race of the year took place at the Red Bull Ring, and the home team did not disappoint with an impressive performance and a big advantage in the race on Sunday afternoon.

Since the timed run took place on a Friday afternoon, at FP2 on Saturday morning, the teams focused on getting long-run data for the remaining two races this weekend (Sprint and Grand Prix). . Carlos Sainz is the man with the best record with 1 minute 08,610s. He was just ahead of teammate Charles Leclerc – P2, exactly 0.05s with champion Max Verstappen in 3rd. The Dutch driver received enthusiastic cheers from the fans, with the stands “dyed” orange. around the Red Bull Ring.

Alpine also has a high performance when Fernando Alonso and Esteban Ocon are ranked 4th and 5th respectively, 0.2s behind the best. P6 for Sergio Perez, who will start the Sprint race from 13th place after being cleared of the fastest Q2 and Q3 results on Friday. The Mexican driver ahead of George Russell and the Mercedes team, had a Friday night. worked hard to repair both cars that were involved in an accident during the qualifying run (teams were only allowed to work 6 hours between the two runs).

Hamilton had to change to a different chassis after the former champion’s rare accident, he was 9th right behind his former teammate Valtteri Bottas, who will start at the end of the race due to new engine components on the Alfa Romeo . Lando Norris (McLaren) finished the top 10, with the expectation of being able to achieve a higher rank in the race.

Entering the Sprint race, most riders choose Medium tires to start because they believe this is the most suitable tire for the 24 laps. Yellow flags appeared at the beginning of the warm-up round when Alonso’s car couldn’t move because the tire blanket had not been removed, then he was put into the pit-lane and had to give up unfortunately. Following the Spanish driver was Chu Quan Vu when the Alfa Romeo suddenly stopped at the last corner before reaching the starting box, causing the whole race to have one more warm-up lap. Quan Vu can continue racing but must start from the pit-lane. Therefore, the Sprint race will only have 23 laps left.

Verstappen had a good start, blocking Leclerc’s chances to attack. That put the Monaco driver at a disadvantage in turn 1 and let Sainz rise to take 2nd place. Driver #55 also tried to attack Verstappen when he reached turn 3 but failed and had to pay the price when Leclerc reclaimed P2 later. there. Both Ferrari drivers continued to compete with each other until round 7 but Leclerc defended too well forcing Sainz to slow down and create distance from his teammate, as well as preserve position. 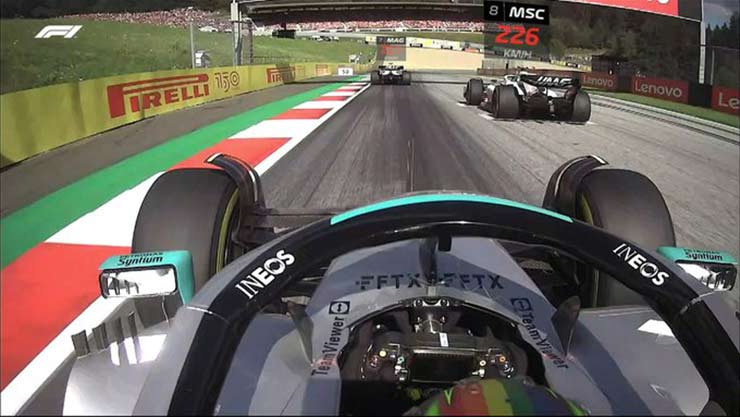 Hamilton struggled against the Haas . duo

Above Verstappen also maintains a gap of over 2s compared to Leclerc. From there, he easily won the 3rd Sprint race in 5 times organized and pocketed an additional 8 points on the individual rankings. Leclerc and Sainz accepted 2nd and 3rd place with 7 and 6 points respectively. Russell started 4th and finished 4th for Mercedes while Perez from P13 improved 5 places in the first 6 laps and ended up finishing 5th, a result that will greatly help Red Bull in the main race. .

Ocon had an easy race with 6th place, and the Haas duo gave Lewis Hamilton a tough day. With the help of Kevin Magnussen, Mick Schumacher defended impressively against the steering wheel of the “silver arrow”. Hamilton started with a collision with Pierre Gasly and tried to improve the rankings but could not find a way to overcome the “descendants” of the Schumacher family. The two had an interesting confrontation and it was not until lap 22, when Mick could no longer keep his stability, that Hamilton got what he needed: 8th place and 1 point in the Sprint race. The “king” of F1 Sprint has a 3rd victory

Mick Schumacher finished 9th despite no points but still has a great chance to be in the top 10 in the main race Sunday afternoon. Valtteri Bottas finished the race in 10th place, but he is certain to start 20th in the main race due to the penalty for replacing the new engine.

After a difficult Friday, Norris and Daniel Ricciardo had a better Sprint result when they were close to the top 10 and fully capable of scoring at the Red Bull Ring. Alex Albon was fined 5s for forcing Norris out of the track in round 4, he finished 13th but fell to P16 after applying the penalty. Lance Stroll, Guan Yu and Gasly are the beneficiaries. Yuki Tsunoda finished 17th, ending a forgettable day for AlphaTauri.