(Sports news, F1 racing news) Sports speed came to Spain more than 100 years ago. Each race is always intense until the last second. And the coming race is no exception. Although the audience is limited, but the title battle does not therefore reduce its tension when the racers take each other’s points one by one.

The Spanish GP is one of the oldest tournaments that are still being held in the history of speed sport. The first race took place in 1913 under the name of the RACE Grand Prix (Real Automóvil Club de España (RACE)), on a 300km street race in Guadarrama, northwest of Madrid.

Carlos de Salamanca was the winner of the event with a Roll-Royce. Ten years later, the second race, officially named GP Spain, was held on the Sitges-Terramar racetrack in Stiges, south of Barcelona. And Albert Divo and Sunbeam were the winners of the event.

Arturo Mezario together protested against the race in 1975

The venue continues to change due to financial problems. The Circuito Lasarte, where the San Sebastián Grand Prix took place in the 20th century, is the Spanish Grand Prix track since 1927. The races are no longer held after 1925 due to the civil war. In 1946, racing returned to the name Penya Rhin Grand Prix on the street in Pedralbes, Barcelona.

The modern F1 era puts Spain on the schedule in 1951 in Pedrables. Here, Juan Manuel Fangio took home his first world championship. The tournament last appeared on the street in Pedrables in 1954. In the remaining years the event did not take place due to financial problems.

RACE authorizes a racetrack permanently in Jarama, north of Madrid, while the Spanish government equips the streets of Montjuïc in Barcelona with safety upgrades. The two locations have been held since 1968. The 1975 accident crossed the Montjuïc name out of the race site. In 1982, the tournament was canceled due to the unsafety of the race. The Permanente de Jerez track completed in time for the Spanish Grand Prix’s comeback in the 1986 season, where Ayrton Senna beat Nigel Mansell by a narrow margin of just 0.014 seconds. The last race at Jerez with the name Spanish GP took place in 1990 (European GP is still held here in 1994 and 1997).

The Circuit de Barcelona-Catalunya started construction in 1989. The track was completed in 1991, and the event was moved here, until now. This is part of the development project for the 1992. Barcelona Olympics. In 2013, together with Catalunya, the Spanish GP was scheduled to be held on the streets of Valencia, but this did not happen due to financial problems. The race in 2020 had to delay the schedule from May to August due to the influence of the Covid-19 translation. Circuit de Barcelona-Catalunya has a one lap length of 4,675 km with 16 corners in all. Recently, the track has been revised in the 10th bend area to increase the safety of the racers. A total of 66 laps with a total of 308,424 km is the distance that the racers must pass. Two DRS zones have been set up on the track, located on the start and between the ninth and tenth corners respectively.

The most durable materials are selected for this race. C1 for Hard tires, C2 for Medium tires and C3 for Soft tires. Tire tactics will be very diverse. In the race in 2020, defending champion Hamilton won with two pits, Sergio Perez finished fifth, only once during the race, while Valtteri Bottas ranked third on podium. 3-stop strategy.

The race will return to the traditional May time, the weather will be cooler than the previous year. It is also the first time that pre-season testing has not taken place in Spain since 2014. And with the new change of the track, teams come without a chance to gather information on the new specification. most of the car.

Of all the races at the Circuit de Barcelona-Catalunya since 2001, only four times were pole winners and two different race winners. Hamilton currently has 5 wins in the Spanish GP, while Michael Schumacher currently has 6. This is an opportunity for the “silver arrow to continue” leveling the records and at the same time outstripping the opponent on the rankings.

Or Verstappen will continue to love this race, because here, 2016 is where he has his first victory in his career. Or at home, Alonso – twice world champion – will make a breakthrough in the next race. Watch Formula 1 Aramco Gran Premio De España 2021 at 16:30 on May 7 for the first test session and 8:00 p.m. on May 9 for the official race. 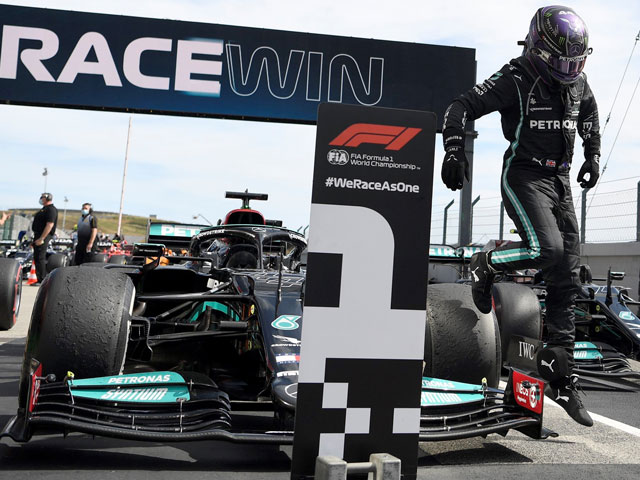 (Sports news – F1 news) There is nothing stopping champion Lewis Hamilton from winning a brace at Portimão. British handlebars and other …