(Sports news – F1 racing news) Circuit de Barcelona – Catalunya will take place at the weekend the 6th race of the season. Which way will the confrontation between Red Bull and Ferrari turn? Spanish GP will have the answer.

The Miami GP more than 10 days ago, Verstappen and Red Bull won spectacularly to keep up with Ferrari’s Leclerc rival. More importantly, this is the 3rd win in all 3 races that the 2021 world champion has completed so far. This success comes from the improvement, upgrading of the RB18 with each race since the start of pre-season testing.

Verstappen is slightly better than the opponent.

In the US race, Red Bull has an advantage over his opponent about 0.2-0.3 seconds/round. This comes from reducing the weight that is exceeding the minimum allowed. It helps Verstappen completely dominate on the track. Coming to Spain, according to experts, the Austrian racing team will continue to have an improvement package to reduce the total weight of the car further.

In addition, it is necessary to mention the change in the design of the floor, the diffuser. They always have small upgrades through each race. One point worth noting, even though it is just a “rumor”, they will have a large aerodynamic installation, expected to apply at Silverstone at the earliest. It is the story of the following more than 2 months.

Previously, during the period of dominance of Red Bull and Vettel. They always apply the design philosophy with high downforce. The disadvantage is that it does not provide good speed in long straights. This season, taking advantage of the new floor standard, they have maximized the efficiency of compression, so that they can use the rear spoiler with less downforce – all for the optimal speed that the racing team has. in straight sections, which is recognizable on this season’s RB18.

Although the racing team has many new updates. But in the end, the biggest concern of “Bull Goat” is to cut down the excess weight as soon as possible on their car.

With the existing power, plus new upgrades. This weekend in Barcelona, ​​Red Bull is on the verge of winning again. 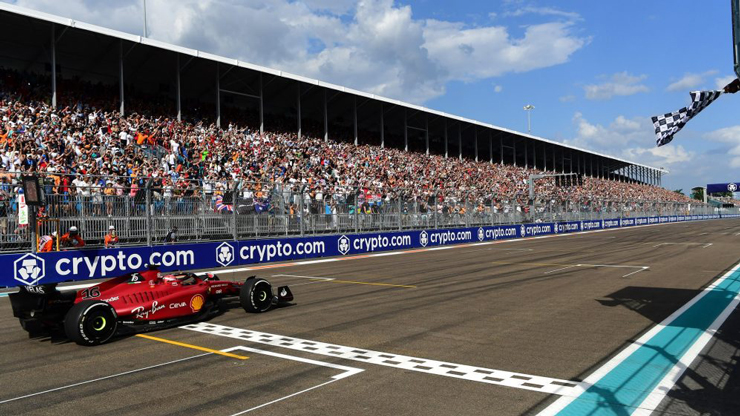 Leclerc and Ferrari are determined to return to the winning circuit.

In the opposite direction, losing to the main opponent for 2 consecutive races makes Ferrari feel the “heat” of Red Bull right behind. The reason lies in the fact that the Italian racing team always chooses to optimize their car in each race, rather than a big upgrade package. Now, that will probably be changed at the Spanish GP.

In contrast to the rival’s RB18, the F1-75 is designed with high downforce, they have the upper hand in medium and low speed corners, but in the straight, they are relatively inferior to the opponent.

Recognizing the problem, the Red team came to America with a design package and installed a lower downforce rear wing to improve speed. It ended up not being used to race in Miami. The main reason is that the surface of the track there is new, it leads to the road surface with very low grip, so the downforce cannot be reduced. Therefore, the racing team is forced to return to the same high compression setting package.

During the break between the two legs. Ferrari took advantage of last week’s midweek tire test and promotional shoot to bring an updated package to Barcelona. Although the team did not announce details of this weekend’s upgrades. But experts – based on images collected at Monza – think that the Red team will bring many new things over the weekend.

The Italian team will certainly use a new wing, the design is somewhat similar to the one that Mercedes used on the W13 in Miami or Alpine with the A522 from the beginning of the season. This design is said to reduce downforce, while increasing traction, helping the car reach higher speeds in straight sections – where they are losing to opponents.

There are also a few changes, from the front suspension to the new brake hoses. although not confirmed, it is possible that Ferrari will have a floor design package to minimize the impact of porpoising. And even though the F1-75 is not a car with too much excess weight, the racing team has also provided an adjustment that reduces the weight of the car by about 2kg!!!

Two racing teams are leading the preparation for an uncompromising battle in Barcelona. There they will bring major upgrades. Red Bull hopes the strength on the straight will help them stand firm against the “attack” of the opponent.

Ferrari expects the car’s performance improvement from the new updates that will give them one more boost. Although only one team will achieve the goal, but this season’s battle does not stop, the opportunity is still divided equally for all. Verstappen is more appreciated, let’s wait for Leclerc and Ferrari to ‘counterattack’. It will be a 50-50 chance for both! Spanish GP is the “all hands” gamble that Mercedes is forced to play!

Mercedes is facing its worst performance in nearly a decade of dominance. With the new technical regulations in 2022. They have never passed the qualifying round better than 5th, the gap to the pole position is about 0.8 seconds.

The cause is attributed to the form of air vents in the body of the car “zero-pod”. From the outset, all simulations of this design suggest that it offers enough performance to rival Red Bull and Ferrari. In fact, at the start of the season, plus the porpoising (which most teams experience), the W13 had the worst performance ever.

Spain is where pre-season testing begins. Now Mercedes is back here for the Spanish GP. Here, the racing team will have one last chance to evaluate the data, to see if its car design philosophy really aligns with the new norm! The result of this race is very, very important, as that will be the answer to whether the “Zero-pod” design is the right direction for them!?

If the car does not have the desired performance, it will probably be a disaster for Mercedes. The effort and money for them to apply the upgrade packages from the beginning of the season to now will be considered wasted – if the body design changes. But most importantly, at Barcelona, ​​they will have an answer to the direction of car development for the rest of the season, and also for the following years. It will be a premise for the team to return to a competitive position with Red Bull and Ferrari.

Although not able to compete with the two leading rivals, but Mercedes is at a level above the middle teams. The last 5 races in Barcelona, ​​the German team is the winner. This year it is unlikely, but the task of finishing the race in the top 6 is not too difficult for them. If there’s podium that’s worth it – in so many ways! Alpine wants to score, but is making it difficult for himself by doubting Alonso!

The next group is still the competition between McLaren and Alfa Romeo, while Alpine is lagging far behind.

The problem for the French team is that they always have problems with Alonso’s car, causing the driver to only get 2 points (compared to Ocon’s 24) after 5 races. Especially in Miami, despite finishing 8th, 2 5-second penalties made this driver fall out of the top 10.

More ironically, instead of focusing on the performance upgrade package they plan to apply in Barcelona. Alpine is again considering replacing the Spaniard in the near future with young talent Piastri, possibly in the middle of this season. This can have a negative impact on the team’s performance in the upcoming races. If the team leader does not have clear decisions, they will most likely lose the 6th place of teammates to the opponent behind AlphaTauri.

Like all teams, McLaren’s return to Barcelona comes with upgrades to the car, of course. The empty hand in Miami is the driving force for the team’s return this weekend. They will compare the car’s performance changes after the updates since the beginning of the season with the first test here, thereby increasing the speed of the MCL36.

The goal of scoring ability is not out of their reach. But the score can be brought back by Norris. And Ricciardo will probably expect ‘luck’ from developments on the track more. Anyway, that’s just a comment before starting the Friday afternoon test session. Alfa Romeo with the goal of attacking McLaren.

There will be a challenge for Norris from Alfa Romeo’s Bottas. The ambition of this racing team when applying the upgraded C42 package in Barcelona, ​​is clearly not beyond the goal of escaping the pursuit of racing teams such as Alpine, AlphaTauri and Haas.

But perhaps this team from Switzerland is even more ambitious. With an experienced person like Bottas, the same time he spent 5 years with Mercedes. He made a significant contribution to the simulation process, as well as the development of cars for the racing team. If all goes well, the opportunity for them to compete for 4th place with McLaren is entirely possible.

Top of the last race teams, Haas is different from the rest when there are only tweaks for the weekend race. They think the current installation package is good enough to be able to participate in the 2nd or 3rd qualifying round. All resources will be devoted to a big upgrade pack after about 4-5 more races.

The goal of the American racing team is to help Mick Schumacher score points to help Magnussen help the team advance on the leaderboard. The young German driver was very close to his goal of scoring in Miami, before having collisions on the track and falling out of the top 10 at the end of the race.

Gasly/AlphaTauri and Vettel/Aston Martin are also circling to help the home team score, but it may be difficult to have a chance because there are only 10 drivers to score, and the opponent is identified too many. They should expect unexpected developments on the track to take advantage of opportunities, rather than believe in the strength of the car. But who knows, Aston Martin’s release of version 2 – the AMR22B – could make a difference to Vettel’s steering wheel.

Finally, Barcelona is the perfect place to put updates and upgrades into the car. Reasonable from the diverse track structure, the similarity of the track segments with many races are present on the calendar, the familiarity of the drivers to each corner. The timing is right – 3 months after the test – the overall settings and upgrades on previous races have room to compare and perfect.

Circuit de Barcelona-Catalunya is where Verstappen got his first victory in his career, in his first race with Red Bull in 2016. He will look to the weekend with the goal of winning.

Leclerc and Ferrari will do everything to get things back on track by stepping on top of the podium – they will make for a hot race weekend. Watch the Spanish GP 2022, the race starts at 6pm on Friday with the first test session, and the qualifying round at 9pm on Saturday, May 21, 2022. (Sports news – F1 racing news) After the first race that lived up to expectations in Miami, F1 crossed the Atlantic Ocean once again, arriving at a familiar place to open the match…