Race day started with bad news. There was a problem with Tsunoda on the way to the starting line, and the Japanese driver finished the race before it started. Besides. Ricciardo was also penalized 3 places for blocking Ocon in yesterday’s qualifying session.

After Tsunoda returned to the pit and prepared the ball for the start, the tires appeared. 15 riders will use Medium tires, of which only Stroll will use not very “new” tires with a life of 1 lap. Hamilton, Hülkenberg and Magnussen will start with Hard tyres.

Selection of starting tires of the racers

Pérez was pretty quick at the start of the warm-up lap, and had to slow down in the last bends so the group behind didn’t come back too long, possibly causing the tires to cool. And then 18 cars were ready, the green flag was waving and the red light was on.

From the first pole position of his career, Pérez had a good start and escaped the Ferrari duo right behind. But Leclerc pressed Sainz on turn 1 and created space for Verstappen to pass. Magnussen rose above Gasly. Zhou had a hard time passing the first corner and fell to 18th place.

Russell attacked Ocon’s position, and with DRS escaped safely ahead. Round 5, Ocon and Alonso started to have an internal battle for 6th place. This fight helped Russell have a safe distance in 5th place, in addition, Bottas and Magnussen in the back were close to the place. . 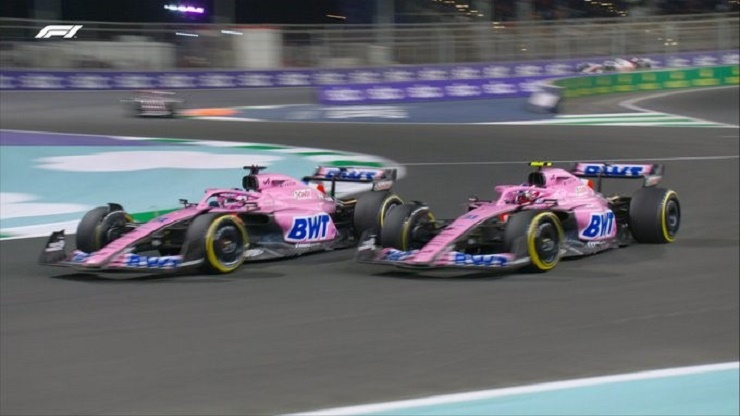 The Alpine couple was constantly competing in the beginning

Round 9, Ricciardo entered the pit early and changed to Hard tires. Now Alonso is defending 6th place against Ocon, Bottas and Magnussen. Zhou in the back passed Albon from off the track, did not return to position and will be penalized 5 seconds.

Ocon, after being instructed to hold the position, was soon overtaken by Bottas. Hamilton similarly overcame Gasly and returned to the top 10.

Round 15, the pit teams of both Ferrari and Red Bull were waiting, but only Pérez entered the pit and Leclerc took the lead. The Mexican racer is back with new Hard tires and a Russell rear. The yellow flag was raised. Latifi had an accident. VSC then Safety Car appeared on the track. A tire change opportunity is open to all.

Pérez got in on the action as Sainz just left the pit and moved up to 3rd. Only Hamilton, Magnussen and Hülkenberg started with Hard tires without changing their tires as the convoy began to form behind the Safety Car. 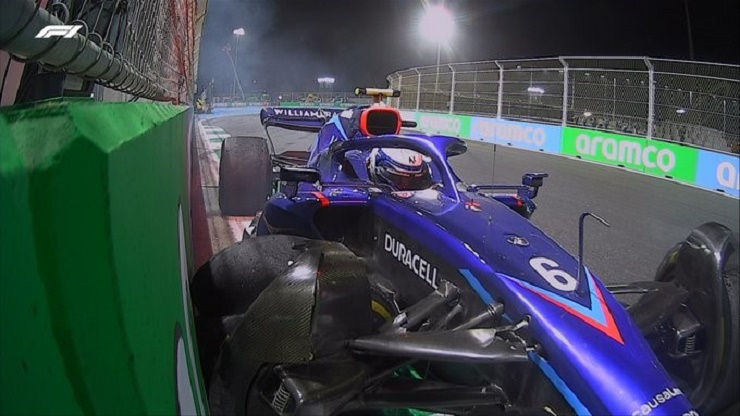 Latifi’s 2nd accident of the week

Safety Car returned to the pit at the end of lap 20. Leclerc and Verstappen were level again just before that point. But the Ferrari driver still sped away and continued to lead the race. Pérez also returned the position to Sainz before a verdict was made.

Hamilton passed Magnussen, but was quickly reclaimed with DRS on the main line. In the next lap, the British driver again used DRS to pass, and kept 6th place. Meanwhile, it seems that Zhou’s 5-second penalty didn’t count, and he got a driving penalty. pit road.

The Top 2 are continuously recording purple times across sectors, and Verstappen is also very adamant that Leclerc has crossed the line at the pit entrance. Round 33, more than half way through, but Hamilton’s tires still seem to be in good condition.

Round 36, Bottas entered the pit for the second time, and changed to Medium tires. Meanwhile, Alonso and Ricciardo had problems and both stopped near the pit entrance. Bottas also returned to the pit and was unable to finish the race. Taking the opportunity that VSC and the pit were not closed, there were a number of more drivers including Magnussen and Hülkenberg who competed for a letter to change the tire. Hamilton went over the entrance when he received a signal from the technical team and missed a precious tire change opportunity. At lap 41 when VSC finished, Hamilton immediately changed into Medium tires and returned to 12th place. Verstappen took the lead when he passed the last turn, but Leclerc with DRS quickly regained it easily. Round 47, Verstappen this time went ahead and blocked the defensive step. Then Stroll had a collision with Albon and seemed to be the end for Leclerc. Because the most likely opportunity is to pass in sector 1, but that is the only area where the yellow flag is raised on the whole track, so the Ferrari driver helplessly looks at his opponent winning the race, the only consolation for Leclerc is he got 1 more point by setting the fastest lap with 1 minute 31,634 seconds.

The defending champion has his first win in 2022. Both Ferrari drivers will join Verstappen on the podium. A very unlucky race for Pérez in 4th place. Russell clung to 5th. Ocon made no mistake and secured 6th place against Norris to the end. Gasly finished eighth, followed by Magnussen and finally Hamilton.

Saudi Arabian GP 2022 started with only 19 drivers, and only 14 riders completed the race, when up to 5 drivers had to give up due to different reasons. Ferrari is still showing strong in the new era. Back to Albert Park, which team will have the upper hand? Or will continue to be the leading position that constantly changes hands throughout the race. Teams will rest for a week before returning to Formula 1 Heineken Australian Grand Prix 2022 taking place from April 8. (Sports News – F1 Racing News) After a Friday filled with skepticism about whether the race can go as planned, Jeddah has once again given the audience a great race…