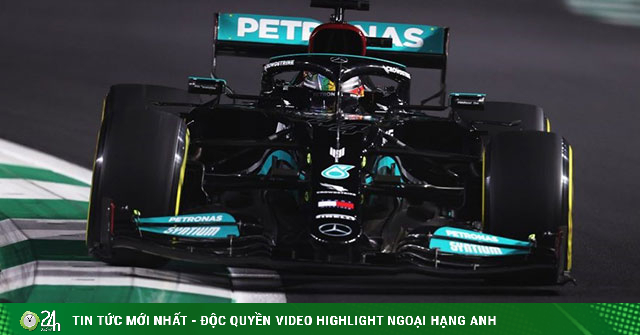 Max Verstappen was the fastest in the last preparatory run before entering the qualifying round, and more importantly, his teammate Sergio Perez ranked 3rd. In this run, the racing teams only started working after 10 minutes. first to have the most similarity to the rating run. Hamilton achieved a good record, 1 minute 28,314s on Hard tires but could not improve when switching to Soft tires.

Meanwhile, Verstappen felt more comfortable with the red rim tires and set a new record – 1 minute 28,100s, although only 0.2s more than Hamilton’s Hard tire. Perez stood at P3 for “bull butt” but was 0.529s away from his teammates, followed by rookie Yuki Tsunoda – P4 for AlphaTauri.

Pierre Gasly finished the top 5 with a lap on Medium tyres. The French driver had a “heart-pounding” situation when narrowly avoiding the slow-running Mercedes #44. Rookie Nikita Mazepin had a similar situation with Hamilton and he also reacted quickly enough to avoid a high-speed crash between the two cars.

Valtteri Bottas is only ranked 6th, losing 0.9s to P1, followed by the Ferrari duo, Charles Leclerc, who just had an accident in FP2, and Carlos Sainz. Esteban Ocon (Alpine) and Lando Norris (McLaren) are the two remaining names in the top 10. The difference between positions from P7 to P10 is only 0.2s. In general, the traffic is still in a ‘bad’ state, and that will greatly affect the performance of the racers in the next run. After completing a run, Hamilton slowed down on his way back to the pit, and inadvertently obstructed both Gasly and Mazepin during their run. On Mercerdes’ communication channel, Hamilton had absolutely no idea who was behind. Fortunately, there were no accidents. The defending champion has been called in for the incident to be investigated.

A penalty to the starting position will greatly affect the championship this time. And Verstappen will have a big advantage for the next race. In addition, Bottas had the engine replaced to fix the leak problem. No penalty was given so it is still within the allowable amount.

It was dark and the lights were on. The first grading session is about to begin. On a narrow track like the Jeddah Corniche Circuit, the first 18 minutes will be chaotic for all 20 drivers. The track temperature has dropped to 28 degrees. Same condition with FP2 yesterday. 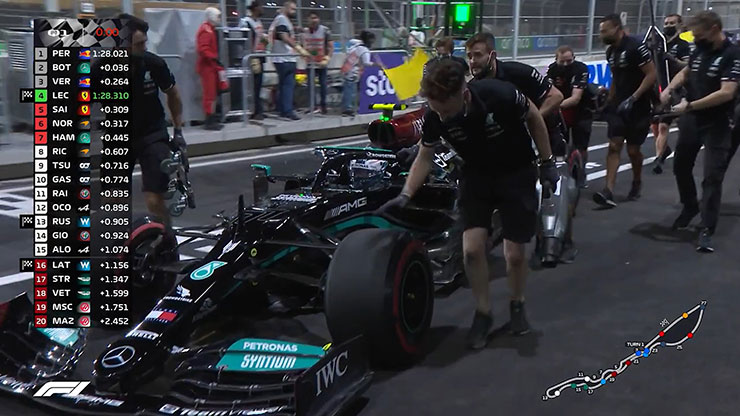 Bottas’ engine was assembled very quickly, just 2 minutes after the green light was turned on. Hamilton was only reprimanded and fined €25,000 for the incident with Mazepin in FP3 on turn 8. The narrow track and traffic jams had a big impact on the drivers’ performance. Gasly happened to block Sainz’s way, fortunately did not happen, but the incident will be investigated after the classification.

The Red Bull duo led Q1 early on. Hamilton made a mistake in the first lap before climbing to the top of the leaderboard in the 2nd. Bottas settled in the top 2 before crashing at the end of Q1.

Alonso was fast enough to get into Q2 in 15th place. Vettel improved on the final lap but not enough to overtake Alonso. Both Aston Martins were eliminated, along with two familiar names from Haas. The 16th fastest Lafiti is the last name that will not make it to Q2.

Sainz “flies” through the 11th corner

The 2nd ranking was quieter, and also smoother. Sainz escaped an accident when “flying” over the 11th turn and grazed the barrier. The Ferrari driver then returned to the pit to replace the new rear wing, continued to run the error and could not set the time. Ricciardo, Räikkönen, Alonso, Russell were also not enough to make it to the top 10.

Hamilton hit the first mark in Q3, and Verstappen easily passed. With just two minutes on the clock, Hamilton returned to the track and rose to the top of the table once more. Verstappen’s turn. After passing the third turn and almost hitting the barrier, the Red Bull driver was the fastest through the first two sectors before crashing into the barrier just one straight road from the finish line.

Hamilton successfully holds the pole position and will start first in the next race. Companion on the first row was his teammate. The previous record was enough to keep Verstappen in 3rd place. Leclerc has had a great classification session since the Turkish GP and will start in 2nd row. Next is Pérez, right behind teammate Red Bull.

AlphaTauri couple ranked 6th and 8th, separating them is Lando Norris. Finally, there is the 9th Ocon, the 10th Giovinazzi in the penultimate drive of the Italian driver’s F1 career. The final result of the grading session

The advantage belongs to Hamilton in 2 consecutive races. Just reaching the top 5, surely the last race will determine the champion of the 2021 season. However, in the final round, Red Bull showed how fast their car is in this Saudi Arabia. So nothing can be predicted yet. Let’s watch the official race Formula 1 stc Saudi Arabian Grand Prix 2021 taking place at 00:30 on December 6. (Sports news, F1 racing news) No one can touch the level of Lewis Hamilton and Max Verstappen in Qatar on Sunday night…