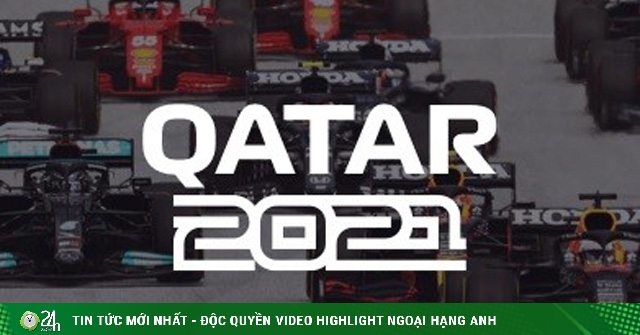 (Sports news, F1 racing news) At the end of the Brazilian GP, ​​the racing teams immediately left Sao Paolo with the destination of Doha and about 4 days for the preparation of the Qatar GP. All for the final battle for the crown – head for the fierce third penalty shootout!

Two rounds of ‘gunfight’ in the final Triple-header of the season had equal results for both drivers who are leading the individual rankings, Hamilton and Verstappen. It makes the battle for the third week in a row this Sunday hotter than ever. The point gap is now fragile with only 14 points when there are 3 more races ahead.

The pride of the defending champion Mercedes was hurt after two “failures” in the US and Mexico, but the way they responded in Brazil showed their terrible strength. The German team showed that they will push the fight to the maximum, determined not to let a subversion happen!

But perhaps, now, the race is not only fighting on the track, but also a colorful behind-the-scenes showdown between Mercedes and Red Bull. At Interlagos, Red Bull was willing to lose €50,000 for Verstappen to “touch” the rear spoiler of the W12, and then an investigation and penalty for Hamilton’s result at Sprint Qualifying on Friday for violating technical regulations. .

But with a newly upgraded internal combustion engine, pushed to maximum capacity, and a 5-step penalty in the race Sunday afternoon, the champion showed that no one could stop him from winning the Brazilian GP.

The inconclusive showdown in the 2021 season.

Not used there again, during the lap 48 race, these two drivers had a collision, although the race supervisor did not issue a penalty. But at the beginning of the week, Mercedes continued to dig up this case when thinking that the situation was dangerous and deserved to be sentenced!!!

Video recorded from Verstappen’s cockpit shows that the driver did not appear to have attempted to steer the car into the track – and the driver should be punished! But the data showed that he braked very late, the chance to get the car on the right track was impossible!? Even so, Mercedes is still asking for “Right to Review” to bring this case up again!

Will Red Bull take the fight or fight back!? When it was rumored that they would gather evidence and complain to the FIA ​​about the legitimacy of the opponent’s rear spoiler, and deem that such a penalty is not enough. In addition, there is a lot of analysis from experts about the fact that Hamilton’s steering wheel can change the position of the steering axis vertically (almost similar to the DAS system they used in 2020 – then banned), This impact can control the suspension, helping to reduce the floor height to reduce drag, achieving optimal speed in long straights!

Whether right or wrong is unknown, but we can also ask questions:

Why Hamilton’s top speed can be more than 30km/h higher than his teammate Bottas, while in other racing teams this number is less than 10, still know the different settings package, but the difference is so big that it’s worth doubting. wonder!? Or why has the RB16B inexplicably lost its competitiveness in Brazil? Before considering suing the opponent, the Austrian racing team also had to temporarily put away its special “secret”.

A special feature between them this season, in any kind of track that is considered suitable for this team, it is where the opponent explodes and wins. Or just last week’s race was clearly lost to the opponent, then the next week was an outstanding performance!!!

And although they always say the battle for the throne will be on the track (as Toto Wolff said). But the way both teams are doing it gives us a perspective – it’s going to be political, and of course it’s going to be money. So this game is even more unpredictable!!!

Qatar GP is a question mark about the ability of the opponent to get ahead for both racing teams, but it will probably still be a 1-2 showdown between Hamilton and Verstappen! Will McLaren in a chasing position lose its breath!?

McLaren from the beginning of the season broke away to almost monopolize the 3rd place of his teammate, although there were times when they let Ferrari catch up and pass for a short distance, and then they came out firmly from the race in Italy. But everything changed very quickly after Ferrari’s last engine upgrade, so that the gap that the British team had worked so hard to build was gradually filled.

Mexico and Brazil passed (McLaren only scored 2 points in 2 races), a new situation that the Italian racing team set up will be very difficult to level in the context of only 3 races remaining, with 31.5 points.

That gap is not too big, but the bigger problem lies in the performance of the Red racing team. As McLaren notes, the new version of the opponent’s engine achieves very high performance, and it remains stable throughout the race, not at every moment. So, if nothing is too sudden, no matter how hard they try, in reality, they can only finish the season 4th place.

Still determined to keep competition with the competition, as the top goal by continuing to improve the car’s performance. But perhaps their main motivation is perhaps a further goal – 2022. When not focusing on achievements, and adding a little advantage, maybe McLaren can surprise with a ranking overthrow. !?

Things are not easy for McLaren, because Ferrari is showing that it is a strong racing team after Mercedes and Red Bull at the moment. It all comes from the new engine upgrade package, which helps them have almost the fastest car on the straight road, just behind the top two racing teams.

Not only that, another factor is that it took them about 2 years to build and operate a new simulation system. It was completed after the summer break, through testing and calibration, the system is now complete.

The Red Team wants to put it to practice in the last 3 races, on the one hand to further perfect it for the purpose of developing cars next season, on the other hand, it also collects and calibrates data in the final races of the season. , helping the team to come up with the most effective vehicle installation package suitable for each race.

In the context of Mercedes and Red Bull almost taking over the top positions. If in Doha, Ferrari continues to widen the gap as it did in the past two races, perhaps the top 3 race will end. McLaren will try hard, even though the advantage is not on their side! The Alpine vs AlphaTauri showdown is not over yet!

Alpine may have been too lucky in a race where the forecast suggests they will lose the top 5 because Gasly will certainly have a good position in Interlagos. In fact, when AlphaTauri’s driver was only behind the 3 strongest racing teams, 7th place in the end helped him score 6 points for his team.

But by making the most of the developments during the race, the duo Alonso and Ocon were able to earn the home team the same number of points. From definitely losing positions, to preserving rankings and remaining just ahead of the competition in the substats (same 112 points), Alpine will have a much more positive momentum towards the final races!

With AlphaTauri, having to compete in the top 5 with rivals clearly does not represent their true potential. By many stages, Gasly can compete fairly and show the advantage before McLaren and Ferrari. The problem is that this racer alone cannot help the team solidify the rankings. At times, it feels like they deserve to be on the ‘top wheel’, but reality shows that their design package doesn’t maximize performance on different types of tracks, so the chance to get ahead is yes and no. big. Anyway, so far they are still there and the 5th place is a positive sign.

The last four teams (Aston Martin, Williams, Alfa Romeo and Haas) will keep the status quo, almost no surprises in this group!

Finally, Losail International Circuit – which hosts the Qatar GP – has been a familiar sight to MotoGP for nearly two decades, but this is the first time a Formula 1 race has been present. The teams come here for the most part.” empty hands” when there is no data to compare. They will have to make the most of the test sessions to find the optimal installation package, in addition to the tire strategy. The track type requires high compression, but it is not impossible to overcome, in addition to the main straight line more than 1km long, is it the place where Mercedes’ W12 continues to sublimate!!!

After 2 rounds of ‘gun battle’, the score is equal with the victory divided equally between Mercedes and Red Bull. 14 is too small a number of points before the last 3 matches. Will Losail be where Hamilton leveled the gap, or Verstappen once again surpassing???

It will be difficult to predict, but a little advantage belongs to the defending champion. It will be a thrilling race for sure. Watch Qatar GP 2021 with a test run that will start at 5:30 p.m. Friday and the qualifying round at 9 p.m. Saturday, November 20, 2021. (Sports news, F1 racing news) The final round of the last triple-header took place in Qatar, opening the final 3 races in…