(Sports News – F1 Racing News) Lewis Hamilton won an overwhelming victory at the first Qatar GP race, shortening the distance of Max Verstappen on the race to the championship. Fernando Alonso once again stepped onto the podium after 7 years.

The sun is slowly descending and night gradually covers the sky of Qatar. Losail International Circuit becomes bright with modern lights when the 20th race in the F1 2021 season takes place.

In yesterday’s rating, Gasly had a flat tire with less than 1 minute left on the clock, and the yellow flag was raised. The management board fined 2 drivers Max Verstappen and Valtteri Bottas 5 and 3 starting places respectively for not slowing down when there is a yellow flag. And that greatly affects the race for the championship, when Hamilton will lead the race.

The first race marks a year before the 2022 World Cup, and the Qatar GP will return in 2023. The track is open, wind and sand from the surrounding desert can affect the performance of the cars. car.

Soft and Medium tires alternate across 20 cars. Gasly, Alonso, Norris, Tsunoda, Ocon and Vettel from the first group will start with Soft tyres. There is also a pair of Alfa Romeo and Williams and Schumacher also started with C3 tires. The remaining riders all choose Medium tires.

Racers line up in a row during the warm-up lap. Returning to the last turn, Hamilton slowed down, waiting for the last drivers to come close to prevent the tires from cooling down. And all about placement, waiting for the signal to start the first Qatar GP race. 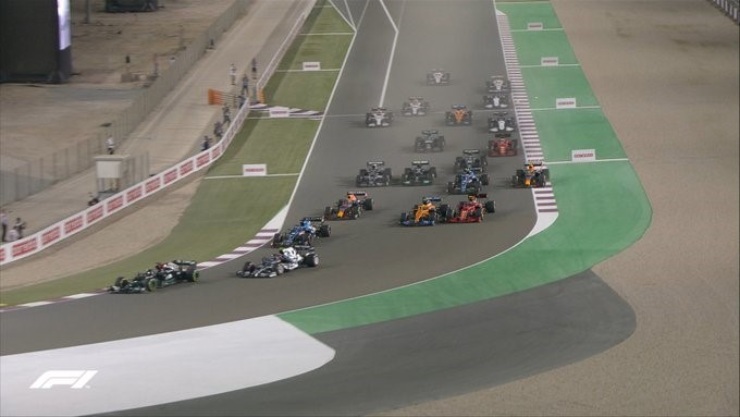 Chaos on the first lap at Losail

Hamilliton had a perfect start in the first race in Qatar and escaped the chaos behind. Alonso, after a bit of difficulty, overcame Gasly.

Verstappen moved up to 4th place while almost colliding with Alonso. Bottas fell to 11th place. Stroll passed Pérez but then the Mexican driver reclaimed his spot at the very first corner.

Gasly had a pretty wide corner, allowing Verstappen to pass early in the fourth lap. Not long after that, Alonso was easily overtaken and the Dutch driver continued to chase Hamilton.

Round 11, Tsunoda and Räikkönen entered the pit and changed the Medium tyres. Hamilton leads Verstappen to 6.2 seconds and both are quite far ahead of the remaining drivers. Pérez is having an overwhelming race, surpassing Gasly to 5th place. The French driver’s Soft tires are at the limit, and have entered the 14th pit of the pit, switching to Medium tires. 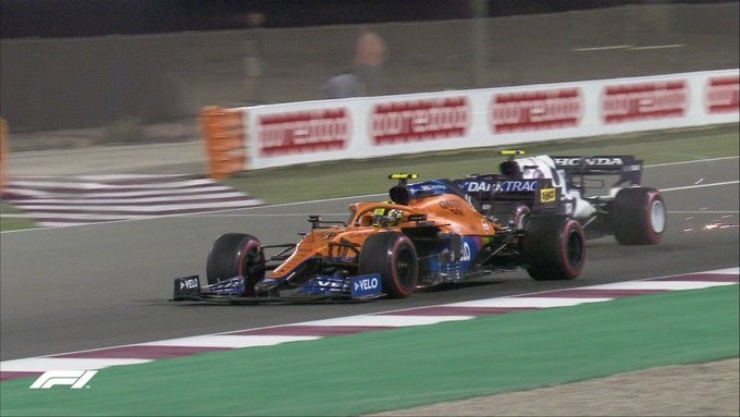 Gasly is constantly being left behind

Round 18, Verstappen entered the pit early, changed to Hard tires, and returned right before Alonso. Hamilton didn’t want to and pit early, but Mercerdes didn’t think so. They reacted in the next round, and also with Hard tires, and a safe distance when leaving the pit.

It was followed by Pérez’s turn, albeit slower than his teammate, and back to 12th. Hamilton took the lead by a steady 8.3 seconds.

Round 23, Bottas overtook Norris for 4th place. Pérez had a difficult confrontation with Vettel, but on 24 lap tires, the German driver could not hold out for too long. Alonso entered the pit from 3rd place, changed into Hard tires and returned to 8th place. 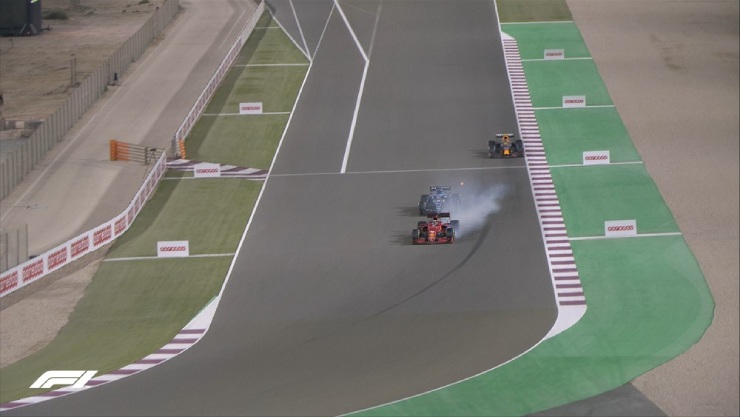 The moment before Leclerc fell 2 steps

On the 26th round, Norris abandoned the Soft tires, switched to Hard tires, and left the pit behind Gasly. Alonso is about to pass Leclerc on the main line, Pérez wants to join. And the Ferrari driver lost 2 places after 2 turns. Both Ferraris went into the pit after that, a perfect double stop by the Italian team, Sainz back in 10th place, Leclerc 13th. Round 29, Pérez overtook Alonso on the 4th turn with difficulty. towel.

Round 33, Mazepin finally entered the pit, and only Bottas on the road had never changed a tire. But that was the wrong decision. Mercerdes has received news that Bottas’ top left tire has been punctured. Half a lap to the pit and on the way back, the Finnish driver left a sparkly performance. Pérez returned to the top three thanks to that incident, and Alonso was also promoted by one place. 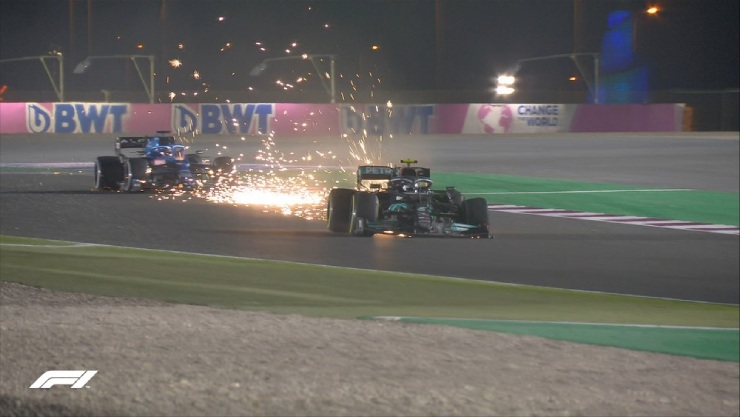 Bottas’ “fireworks” on the way to pit

Round 37, Gasly pitted for the second time, changed to Medium tires and returned to 11th place. Hamilton took the lead by 8.5 seconds, and with the fastest lap in hand, the distance to Verstappen after the stage. This race will only 6 points.

Round 42, Verstappen entered the pit for the second time, and then Pérez, both switched to Medium tires. Mercerdes simply did the same with Hamilton the next round. Alonso returned to 3rd place after Pérez pitted. Despite approaching the end of Räikkönen’s career, the Alfa Romeo driver was still able to bring in some interesting contention with Lafiti for 16th place behind.

Ocon had a great defense against Pérez, but the Mexican driver with the newer tires successfully pushed through, continuing with Norris ahead with a gap of 7 seconds. Alonso needed to avoid the curbs to use the 1 stop strategy successfully.

By lap 51, Bottas was brought to the pit and “completed” the race early. Off the track, Russell had damage on the front wing and a yellow flag appeared. Round 52, Lafiti punctured a tire. On the surface it is certainly more serious than the case of Bottas before it. The tire began to puncture as soon as Lafiti passed the pit entrance. Unable to return to the pit, the Lafiti racer parked on the gravel for the race staff to rescue the car. And Virtual Safety Car is implemented.

In the penultimate round, Verstappen entered the pit, in case there was a chance for another fastest lap, and switched to Soft tires. VSC finished as Hamilton crossed the line and started the final lap, while Verstappen still had a last chance, despite still having the fastest lap in hand. 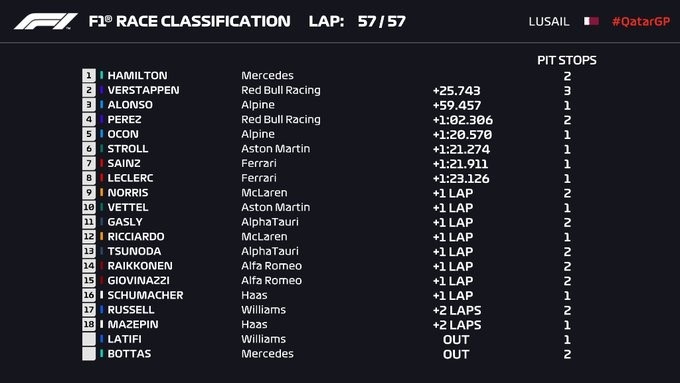 A pretty big twist in the title battle, with Hamilton closer to his eighth title than ever. And it looks like the 3rd and 5th places have decided the owners. Ferrari is leading McLaren to 39.5 points. And Alpine in the great race is now 25 points ahead of AlphaTauri.

Ending the triple-header with Hamilton’s return in the race to the championship, things slowed down to rest before the final 2 rounds of the 2021 season.

The next destination will be a brand new track with the first race in Saudi Arabia. Watch Formula 1 stc Saudi Arabian Grand Prix 2021 starting at 20:30 on December 3. 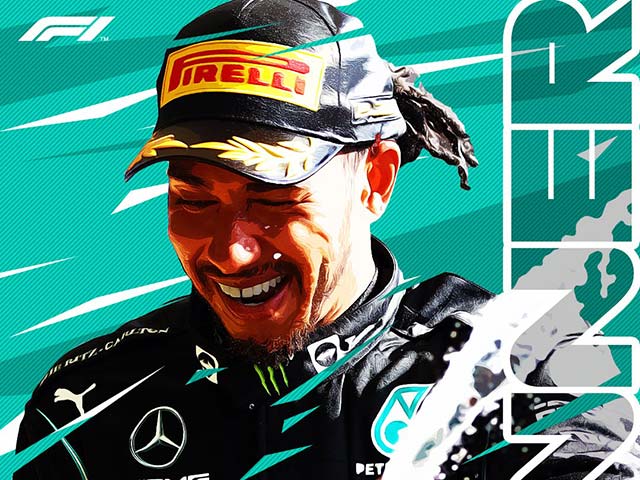