(F1 racing news) After winning the pole on Saturday afternoon, Lewis Hamilton experienced an historic race to become the new F1 ‘master record’ and with many other remarkable statistics. in the first race at Portimão.

Mercedes’ dominance continues to extend at the first race at the Portimão racetrack. This is the 13th consecutive leg the German team has won the first starting position, the sixth longest series of achievements in F1 history.

The record belonged to Williams in the period 1992-93 when they had 24 poles in a row. Champion Lewis Hamilton won the 97th pole in his career, the 9th time in 2020 is also the first time in Portugal.

Valtteri Bottas once again lost to his teammate, having led all three trials, a scenario similar to what happened at Mugello. Mercedes had the 9th of the last 10 races occupying the first starting line, only missed at the Sochi race. Max Verstappen (Red Bull) once again started the race in 3rd place, for the 6th time in the last 9 races.

Charles Leclerc and Ferrari for the third time this season ranked at 4th, which is also the second consecutive leg that the Monaco driver brought the SF1000 of the ‘war horse’ to the top 4. With this result, Sebastian Vettel had the 9th leg. beaten consecutively by his younger teammate for the 7th day.

Sergio Perez (Racing Point) ranks 5th for the main Portuguese GP 2020 race, with that achievement, he has started in every 4th, 5th, 6th, 7th, 8th, 9th place at least once this season. However, Perez has never started the top 3 in his entire career.

Lando Norris has the third consecutive leg to start the race at No. 8 but was beaten by teammate Carlos Sainz in 6 of the last 7 qualifying runs. Pierre Gasly is ranked 9th and has made 7 appearances in Q3 this season. Daniel Ricciardo is last in the top 10 after making a mistake at the end of Q2. In the last 5 races he started in this position, the Renault’s driver did not score but he won a memorable 2017 Azerbaijan GP from 10th. 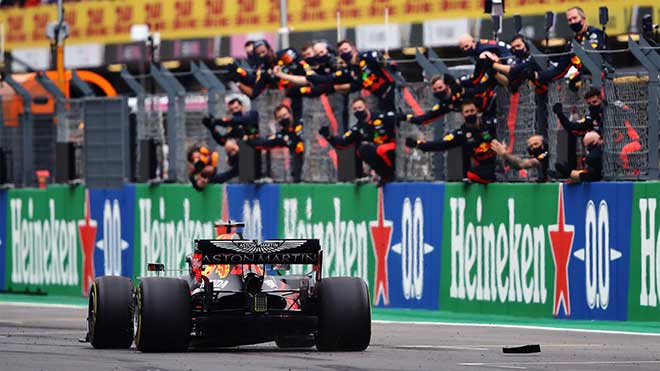 Red Bull has the 10th leg to win podium this year

Lance Stroll has continued to be absent in Q3 since Mugello having made his 12th start at Sochi and Portimão while he missed the race at Nurburgring do COVID-19. Daniil Kvyat is 13th and has consistently ranked 11th, 12th or 13th in the last 7 races. George Russell reached the 7th Q2 this season for Williams. Not only did he rank above Vettel, but he also continued to be unbeaten in the qualifying round against his teammate in the past 33 races.

At Alfa Romeo and Haas, Kimi Raikkonen’s internal ranked head-to-head ratio between Kimi Raikkonen and Antonio Giovinazzi and Romain Grosjean with Kevin Magnussen are both 6-6 balanced after 12 races. Haas lost both cars in Q1 for the 6th time this season, while it only happened once in 2019.

Hamilton officially overcame legendary Michael Schumacher to become the most successful driver in F1 history with the 92nd and first win at Portimão. The second all-time victory record in history was shattered on Portuguese soil – Alain Prost surpassed Sir Jackie Stewart’s record (27 victories) at Estoril in 1987. Currently, total victories of Hamilton was equal to the number of coronations of both Prost (51) and Ayrton Senna (41) combined. Ferrari appeared in the top 4 after 7 races

Even before this race took place, the British driver had more championships (91 times) than the number of times he finished 2nd, 3rd and 4th combined (90 times). The Algarve International Racecourse is also the 28th F1 race that Hamilton has crowned in his career, continuing to raise the record he holds. As of this moment, the champions hold the all-time records for the most victories, podiums, points, number of races and pole positions. He also raised his streak to 45 consecutive races – no other driver scored on more than 27 consecutive races. The distance to win the Portuguese GP race is 25,592s, the largest in 2020. This is also the 4th 1-2 win for Mercedes this season, with Hamilton always standing at the highest podium and Bottas ranked second. Three Hamilton, Bottas and Verstappen have joined the podium for the seventh time in 12 races this season.

Hamiltonian order (1st) / Bottas (2nd) / Verstappen (3rd) made 6th appearance, and is 2nd most popular finish order in F1 history, losing only 1-Hamilton / 2 order -Rosberg / 3-Vettel with 8 reps. Verstappen gets the 9th podium in 2020. Both the “silver arrow” and the “bull” have won podium in a country that both teams have never raced before.

Leclerc has the 4th leg in the top 4 this season, and is the first time since the 70th anniversary, 7 races ago. Gasly finished 5th and finished the top 6 in a row, which helped AlphaTauri extend the current consecutive streak to 9 (more than they ever did as Minardi or Toro. Rosso). Over 12 races, the Italian team has only had nothing in Hungary, the rest have at least 1 car in the top 10. 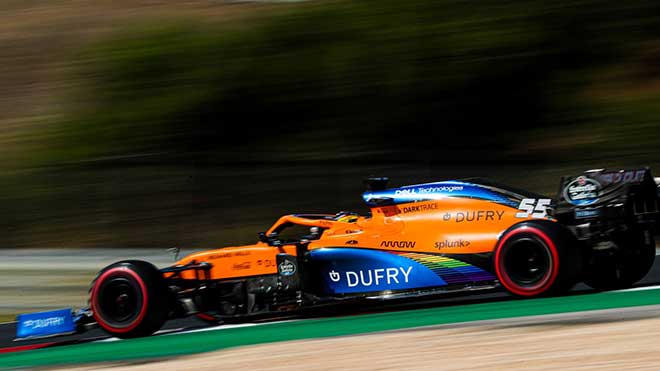 Sainz unexpectedly led the early rounds of the Portuguese GP 2020

Gasly has scored 63 points in 12 races, the same number he earned with Red Bull in the first 12 races of 2019, before he was transferred to Toro Rosso. Sainz led the first few rounds of the race before finishing sixth for McLaren, the fifth time he was in the top 6 in 2020. Perez fell to the bottom of the race in round 1 but excelled at finishing seventh to lift. chain to score 16 consecutive individual points (not including the sector he is absent).

Esteban Ocon beat teammate Ricciardo for just the second time this season in the races where both Renault finished. Vettel finished 10th for the fourth time in 2020 while he has never done so throughout his career. (Sports news, F1 racing news) Portugal GP started with a bit of chaos and some raindrops falling on the track. But “century …