The 18th round of the 2021 season but the title race is still going very intense. Mexico, like recent races, is full of surprises. A track where the advantage is for Red Bull, now Mercedes is performing very well.

As usual, the racers responded to the “We Race As One” campaign and followed by the Mexican national anthem. Pérez was the focus of this race, with chants of “Checo, Checo, Checo!” throughout the stands. And the guy didn’t seem too overwhelmed by this majestic scene.

The weather today is hot and different from the rains that have taken place in recent races. The track temperature has reached 46 degrees and continues to rise. Tires were revealed, and Tsunoda and Ocon chose Soft tires to start. And the remaining riders will all use Medium tires as expected.

Bottas rolled first and led the warm-up lap. Many events can happen. But the leading duo couldn’t let the accident happen. The cars were back in position, and ready for the starting signal.

The lights went out, and Bottas took the lead but was quickly sandwiched between Hamilton and Verstappen. The Finnish driver braked earlier, had a collision with Ricciardo and caused chaos right after the first turn. And as a result, Tsunoda and Schumacher were both victims, and had to stop the race early. Safety was introduced to be able to safely recall 2 vehicles. 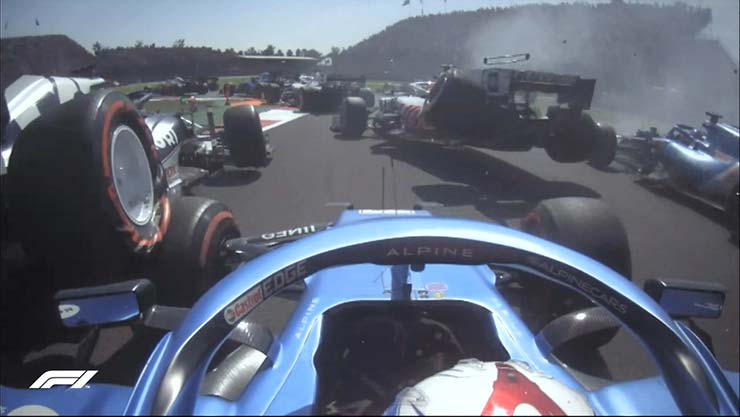 Bottas and Ricciardo had to return to the pit after the previous collision. Ocon in the midst of the chaos accidentally made a springboard for the other two unlucky drivers. Verstappen is currently leading with Hamilton and Pérez at the back. It is indeed the starting point of Red Bull’s dream. Safety car will leave at the end of round 4.

Verstappen with a familiar move suddenly flew away and continued to lead the Mexican GP. Unexpectedly, Hamilton quickly fell behind. Round 9, Räikkönen overcame Russell outside of the 1st round to 9th. The British driver continued to fall behind Alonso after that.

Verstappen starts to lead the race

Round 11, Hamilton is now 3.4 seconds slower than Verstappen who is aiming for an undercut strategy. Round 13, Lafiti entered the pit after feeling no grip, and changed the Hard tires, returning to the last position. Pérez followed Hamilton and was completely satisfied with the current condition of the tires. Round 17, Giovinazzi and Russell and pitted and changed to Hard tires.

Red Bull will probably try to undercut Hamilton with Pérez, and get Mercerdes to react. Just like that, Verstappen will be “rivalless” and leisurely complete the race. Round 20, the leading driver increased the distance up to 6.8 seconds. Bottas was back in 12th place after the crash that occurred early in the race.

Bottas and Ricciardo followed closely throughout the race

Hamilton continued to lose more time when catching the last group of drivers. Gasly with stable form still holds the 4th place so far. Bottas is still battling Ricciardo for 11th place. Pérez is “send” to be friends with Hamilton while Verstappen grows further and further apart.

Round 30, Hamilton entered the pit with a 2.4-second stop, changed into a Hard tire and went back behind Leclerc. Fortunately, the Ferrari driver entered the next lap pit. Gasly entered the 33rd lap pit, and returned to 7th place. The lead driver also entered the pit, stopping 2.2 seconds and coming back behind his teammate. And the audience saw their riders leading the race on this very Mexican soil.

The fight for 11th place is still very tense. And in the 40th round, Ricciardo had to pit after the tire was destroyed after a long fight with Bottas. Red Bull had no intention of taking a gamble and put Pérez into the pit, back behind Hamilton on Hard tires and less than 10 seconds. Next was Bottas’ second pit, but a sticky tire slowed the team and the Finnish driver fell to 15th place after an 11-second pit stop. Sainz entered the pit from 4th, and quickly returned to 6th. Round 46, Norris was the last driver to pit, and changed to Hard tires, back to 10th. Bottas overcame Ocon, and continued chasing Ricciardo. These two riders have been fighting each other since the first lap, it seemed like a slow stop had separated them, and now it’s a fight for 12th place.

In round 53, Verstappen takes the fastest lap from Pérez, and the gap will increase to 20 points to the top. Ferrari wanted to put Sainz ahead so it could chase Gasly, but the transfer took longer than expected after two laps. Russell was having a race to forget and let Stroll take the lead for 15th place. Hamilton couldn’t chase Norris to catch the lap. There are 12 more laps left and 1 mistake can lead to the loss of everything. Pérez constantly pressured Hamilton with DRS. Round 65, Mercerdes put Bottas into the pit to try to get the fastest lap point from Verstappen’s hand.

Pérez slowed down to let the tires cool a bit, and hopefully enough to keep chasing and try for 2nd place one last time. Bottas overcame even the leading driver while trying to regain the fastest lap. Verstappen also amicably gave way. In the penultimate round, Bottas had to return to the pit once more after wearing Soft tires again. Verstappen crossed the finish line, becoming a Mexican GP winner. Hamilton successfully kept the 2nd place. Pérez became the first Mexican driver to appear on the podium in his home country.

Gasly held 4th place for most of the race. The Ferrari duo came in 5th and 6th respectively. Vettel took 7th, Räikkönen 8th, and Alonso 9th. Norris was the last driver to score points at the Mexican GP.

One thing is for sure, the celebration at Hermanos Rodríguez will last long with the participation of DJ Kygo. An emotional race, although he did not win, Pérez won in the hearts of the fans. 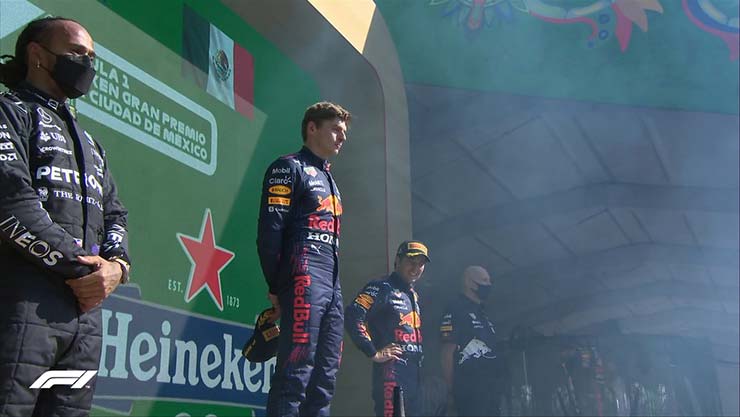 Pérez smiles with satisfaction on the podium

Below the team rankings, Ferrari has surpassed McLaren for 3rd place, AlphaTauri is on par with Alpine and has 106 points together. However, it must be repeated, today is Red Bull’s day. One step closer to a championship for Verstappen and a historic podium for Pérez.

The season is about to end, and there are only 4 races left. The second stage in this final triple-header will be held in São Paulo, a venue where the advantage still belongs to Red Bull. The Friday qualifying session prepares for the final qualifying race of the season on Saturday, before the main event. Watch Formula 1 Heineken Grande Prêmio De São Paulo 2021 taking place from 22:30 on November 12. 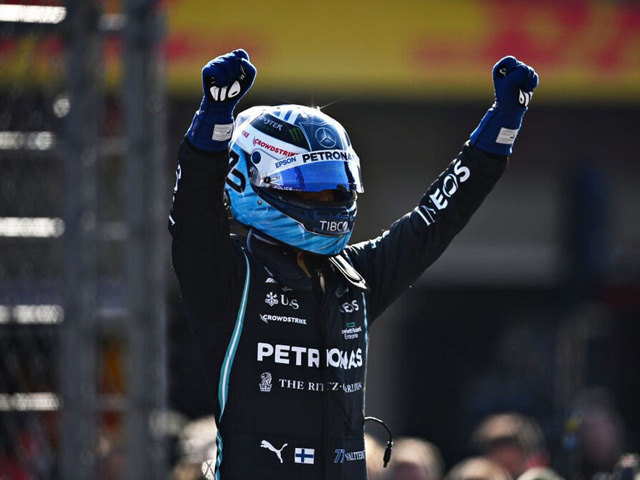