(Sports News – F1 Racing News) The audience received delicious spiritual food when Sergio Pérez led the final test session before the qualifying session. But in the end Mercedes beat the odds, overcame them all and Bottas took pole position at the Mexican GP.

The last run started, the green light was on, but this time all was not in a hurry from the first seconds. Accompanying the final starting group with Lance Stroll and Yuki Tsunoda will be Lando Norris and Esteban Ocon after these two drivers are replaced with new engine accessories. George Russell was only penalized 5 places to start due to changes in the gearbox.

Leclerc’s slip as soon as he was dispatched

After half an hour had passed, Verstappen returned to the top of the table with a time of 1 minute 17,537 seconds, although still slower than yesterday. Leclerc slipped on the 3rd turn while trying to improve his time. The Ferrari driver had to return to the pit to check the car again.

The Mercedes couple back out. Although Bottas did not improve. Hamilton only rose to 3rd, 0.2 seconds slower than his teammate. With only 6 minutes left, Pérez overtook Verstappen and scored the fastest time. Hamilton needed to close the gap, but just enough to get past Bottas. The flag was raised and the crowd exploded with Pérez’s performance. Verstappen was 0.193 seconds slower and ranked 2nd, followed by the Mercedes duo. Sainz ranked 5th, 1 second slower than P1. Tsunoda will start from the bottom but excelled in having the 6th fastest time. The McLaren duo finished 7th and 10th, with Gasly and Leclerc wedged between them. 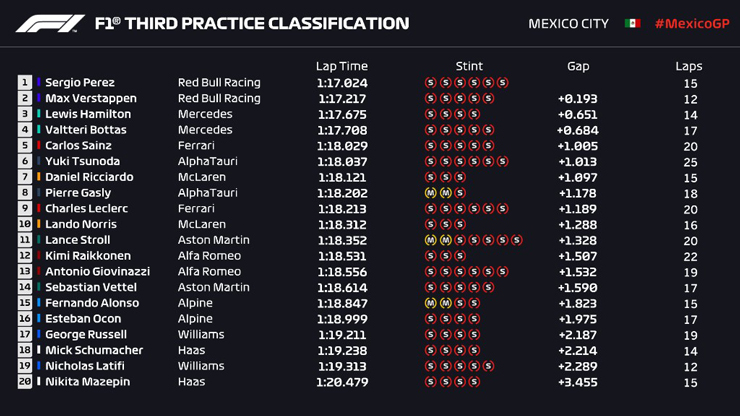 Just a few hours later, the ranking session was back. Lafiti started Q1 with a run on Medium tires. With the previous Medium, many riders had faster times than their own Soft runs. However, in this session, 20 cars need to quickly record the time within 18 minutes, and “traffic jams” will be inevitable, and this tactic can be quite risky.

But Lafiti returned to the pit without confirming the time. Meanwhile, the matter of Russell’s motives was resolved. Less than 10 minutes, the race flag appeared on the track, the running session had to be stopped.

Stroll came to a stop after the last bend, both the front and rear wings were “missing”, and a lot of debris was scattered around the scene. The Canadian driver can safely leave the vehicle. Just before the red flag was waved, Leclerc promptly recorded a time of 1 minute 17,991 seconds and took P1. Räikkönen was spotted crossing the pit line not once but twice. Trouble to the Finnish racer. Q1 continues with 11 minutes remaining after the track is cleaned and safe. Verstappen with a time of 1 minute 16.788 seconds took the lead. The Mercedes duo improved the second run, and in turn ranked right behind Verstappen.

Sainz, after an earlier engine failure, managed to get out of the danger zone and jump to 5th. The Haas duo could not get past 15th. Russell rose to 12th, pushing Vettel back into the group. type. The German driver “accidentally” was in the final lap, saved himself and pushed Alonso down. Alpine ended in disaster with Alonso in 16th place and Ocon continuing in Q2 with a penalty kick.

Alonso, Lafiti, Schumacher, Mazepin and Stroll have been dropped from Q2. “Traffic jam” at the pit exit in Q2

Q2 continued with the next 15 minutes deciding 5 drivers to be eliminated. As soon as the green light came on, the Williams duo quickly, and in a hurry, wanted an early start. The two riders lined up leaving the pit could not escape the eyes of the race management team. They will join Räikkönen in the investigation after the run.

Verstappen took the lead early on and Hamilton hit back, while Bottas could only finish third. Towards the end of Q2, when the pretext was raised, Giovinazzi slipped on the 12th corner, and greatly affected the lap of the races. other racers.

Vettel, Räikkönen, Russell, Giovinazzi and Ocon were dropped from Q3. 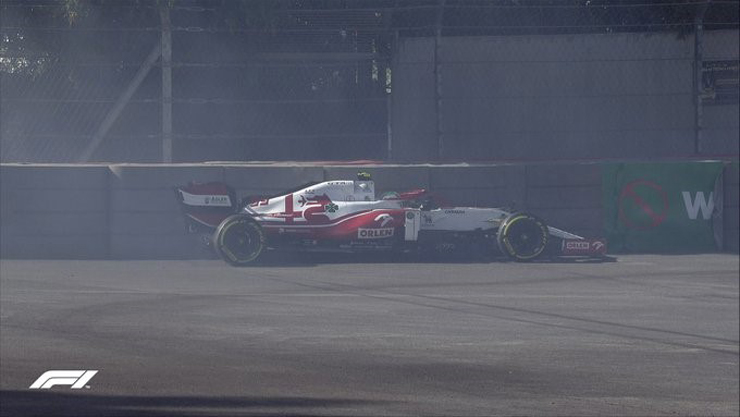 Giovinazzi’s accident at the end of Q2

McLaren was the first team to hit the road in Q3. Red Bull mistimed and allowed Verstappen to overtake the Ferrari duo to get back to Pérez. The racing teams all seem to be pulling each other through this Q3 session.

The Red Bull pair’s last run of Tsunoda in the lane cost Pérez the opportunity to take the pole, and Verstappen was also affected. Bottas was on a mission to drag Hamilton into the lead in the final round. But the future driver at Alfa Romeo is the fastest. Valtteri Bottas won pole position at the Mexican GP and will start tomorrow’s race first.

Hamilton was completely unable to keep up with his teammate. After the run was “sabotaged” by Tsunoda, the Red Bull duo followed and finished 3rd and 4th. Gasly is still in stable form and will start 5th. Sainz returned from engine trouble and stood. 6th. The McLaren duo continued to rank 7th and 10th, this time separating them from Leclerc and Tsunoda. Result at the end of the grading session

The track will remain dirty and slippery on the Hamilton and Pérez starting side. Verstappen will likely be pulled by Bottas. The utopia has already happened, and there is no guarantee that it will ever happen again. Watch the Formula 1 Gran Premio De La Ciudad De México 2021 race when the cars will officially roll out at 02:00 on November 8. “Red Bull is too fast for us,” is what champion Lewis Hamilton expressed after a hard Friday. Mexican…