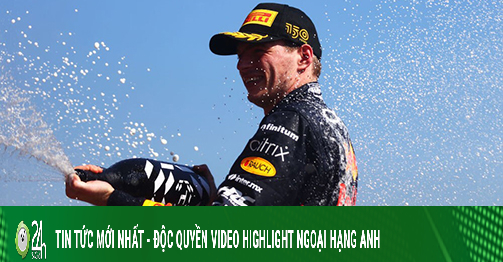 (Sports News – F1 news) Max Verstappen claimed his 27th career win at Paul Ricard, when rival Charles Leclerc missed his appointment after an accident in the 18th round. The Mercerdes duo stepped onto the podium together after the race. blazing “fire”.

The temperature at Paul Ricard exceeded 30 degrees, and the track surface reached 60 degrees. Riders have different methods of cooling down before entering the cockpit. And of course there was no rain during the race at Paul Ricard.

The racers slowly passed Paul Ricard completing the warm-up lap. No one seemed in a hurry as Leclerc returned to the main line, Magnussen still on the 11th corner. The green flag was waved behind 20 riders, all waiting for the start.

Leclerc and Verstappen started well, Hamilton found his chance and overcame Pérez. But Russell let Alonso pass. In the rear, Tsunoda collided with Ocon and fell to the bottom of the race. The French driver was penalized 5 seconds after that situation.

Magnussen moved up to 12th place after the first laps. Sainz struggled a bit but managed to climb to 15th place, with Leclerc still under a lot of pressure from Verstappen with DRS trailing behind.

Round 5, Russell took back 5th place from Alonso, while Hamilton almost raced alone with a big gap with the top 2 and Pérez. Ricciardo let Ocon squeeze into 8th place.

Round 9 and 10, Magnussen and Schumacher respectively entered the pit and changed to Hard tires. A bold move by Haas, but how effective it is to wait for the drivers of the same group to stop changing their tires.

Verstappen seems to slow down compared to Leclerc. And Sainz has reached 10th place after 14 laps. Round 17, Verstappen entered the pit, back to 7th place behind Norris. Sainz easily overcame Ricciardo, and Norris lost his place to the defending champion. Ferrari has not yet reacted to Mercerdes’ tactics, but one of their cars was stopped in the barricade. Leclerc from the lead, lost control and crashed into a barrier on the 11th turn. The Safety Car was on the track, and all, except Verstappen, pitted. New sets of Hard tires were replaced, only Sainz and Gasly with Medium tires. That was also the time when Tsunoda stayed in the pit, ending the race early.

Round 21, Verstappen took the lead again after Safety Car returned to the pit. Sainz easily overcame Norris, Ricciardo and Alonso into the top 5 with the tire advantage. The situation of leaving the parking position in the previous pit of Sainz was unsafe, it gave him a 5 second penalty. Meanwhile, Zhou and Schumacher had a rear-end collision. Zhou entered the pit to replace the new wing, before receiving a 5-second penalty due to the above collision. 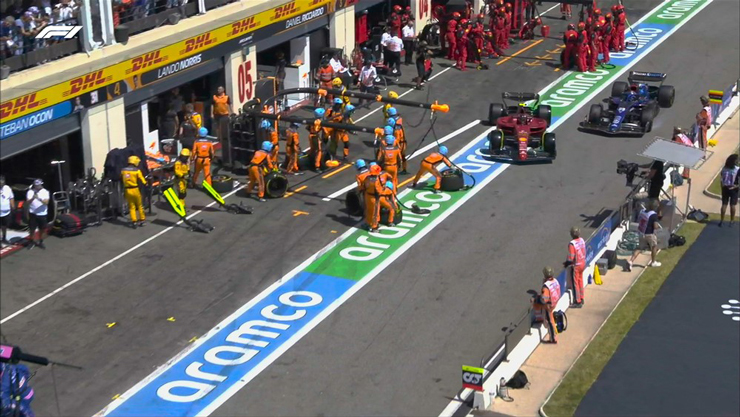 Gasly had a bad run, it was an unremarkable weekend at home. Meanwhile, Ocon wobbles at the bottom of the top 10, and could also take damage from the first round collision. In the 30th round, Sainz overcame Russell and entered the top 4. At a safe distance outside the top 5, Alonso maintained his 6th place ahead of the McLaren duo.

The focus of the race turned to McLaren and Alpine, as Ocon was close to Ricciardo’s position. Round 37, Bottas entered the pit, changed to Medium tires when there were no more Hard tires. In the rear, Magnussen and Latifi collided, both lost and had to finish the race early.

Round 42, when Ferrari wanted to change the tire, Sainz on the road was still busy passing Pérez to the top 3. Immediately after, Russell and DRS advanced, collided with Pérez, the Mexican driver had to cut through the bend to return. racetrack. And finally, Sainz returned to the pit, stopped for another 5 seconds, back to 9th place.

Sainz easily surpassed 2 pairs of McLaren and Alpine and returned to the top 5. Round 49, VSC was deployed to bring Zhou’s car back to safety. When VSC ended, Russell surprised Pérez, breaking into 3rd place.

Verstappen made no mistake, extending his lead in the rankings with a 2022 French GP victory, his 27th career win. Hamilton and Russell both finished in the top 3. Both appeared in the podium for the first time this season.

Followed by Pérez in 4th, Sainz easily returned to 5th from behind the team. Then came Alonso and Ocon leading Norris and Ricciardo respectively. And in the final showdown between the two Aston Martins, the accident almost happened, but Stroll kept 10th place ahead of Vettel. There is still one more race left before F1’s annual break. The weather in Hungary is predicted to be as fiery as at Paul Ricard this weekend. Watch Formula 1 Aramco Magyar Nagydíj 2022 taking place from July 29-31. (F1 Racing News) Confidence after winning at the Red Bull Ring helped Charles Leclerc perform well in the early part of the race at Paul Ricard. But once again Ferrari fans…