(Sports news – F1 news) The half-wet half-dry race at Imola ended with the Red Bull duo on the podium alongside Lando Norris. Ferrari at home left behind a forgettable performance after a DNF by Carlos Saniz and an unfortunate turn of the car by Charles Leclerc.

The sky was clear and the rain had stopped when the departure time was near. However, there is still a 60% chance of rain again, predicted in about 20-25 minutes before the race.

Not unexpected, all 20 riders have already installed Intermediate tires for the starting screen. There is still water on the track, so even the first turns the water splashes will affect the visibility of the racers. But with 20 cars running at the same time, the road gets dry quickly. The warm-up round quickly ended, everyone was holding their breath, waiting for the signal to start.

Verstappen has a good start, so does Pérez but Leclerc has fallen behind Norris. Sainz ran into Ricciardo and the two went out into the gravel. The turmoil affected Bottas as well as Schumacher. Sainz’s car was parked in the gravel while Ricciardo was on his way back to the pit. Safety Car appeared on the track. An unhappy ending for the Spanish driver. 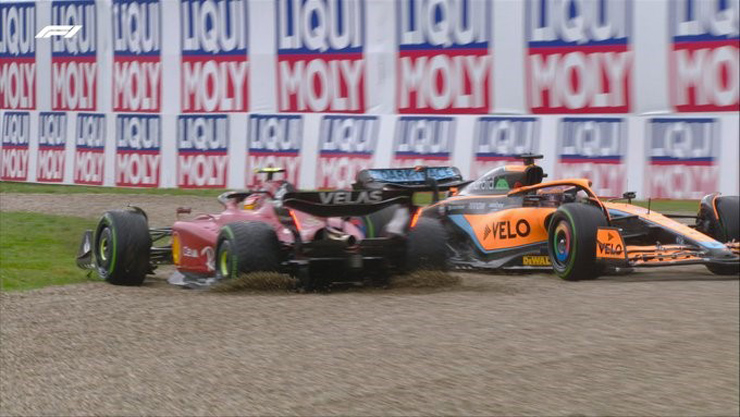 Safety Car returned to the pit at the end of the 4th lap. An indirect victim of the collision was Alonso – Schumacher, while losing control in the collision, collided with the body of Alonso’s car. The damage was quite heavy and that put an end to the remaining Spanish driver.

Round 8, the stands exploded as they watched Leclerc overtake Norris in an overwhelming 3rd place. The riders were starting to show signs of slippery, but the track was drier and no one was about to risk slippery tires. However, the pit side always reminds that it may rain again in the next 10 rounds.

The protracted showdown between Russell and Magnussen helped Bottas close the gap. Driver Haas quickly dropped 2 places after that. Round 18, Ricciardo from the last position into the pit, switched to Medium tires. The remaining teams keep their eyes on this “white mouse” to make the upcoming decision.

The purple sectors of the Australian driver were enough to convince Vettel, Gasly, Albon and even Pérez to switch to smooth tires. The leading pair entered the pit, but with the advantage of hotter tires, Pérez took the second place. Earlier in the pit, there was almost an accident. Ocon was penalized 5 seconds after the chaotic situation in the pit.

With Pérez holding back Leclerc, Verstappen easily went far and extended the gap. Schumacher at the end lost control and crossed the lawn at the Variante Alta bend. The yellow flag appeared for a short period of time. From the highest starting position in his career, this was not the end he expected. 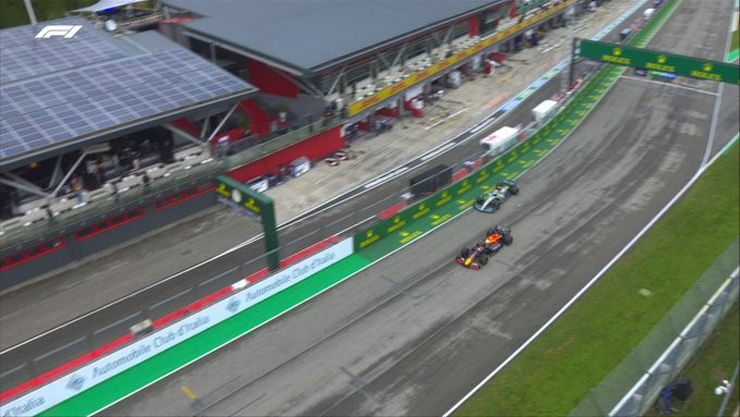 Hamilton “clashed” with Verstappen when he was caught

Ricciardo had to switch to Hard tires, hoping to improve his position. Hamilton was being stopped by the Gasly Wall, but a ray of hope opened when Race Control allowed the use of DRS. Pérez is trying to keep Leclerc out of the DRS range while things stay the same for Hamilton. The day wasn’t worse enough when Verstappen caught the British racing driver’s lap afterwards.

While position remained largely unchanged, Tsunoda overtook Magnussen to 8th. Hamilton with DRS was chasing Gasly, but the Frenchman was also within DRS range with Albon. In another development, Norris is having a lonely but peaceful race at 4th place.

Round 50, Leclerc decided to change the Soft tire. However Norris made a temporary pass with much hotter tyres. Pérez was brought in to be able to block the fastest lap. Verstappen also wanted and followed immediately to the next round. The most unfortunate moment of the day for the “tifosi”

Leclerc shortened the gap to Pérez to less than 1 second, pushing with all speed, but trying too hard was “too late”. The Ferrari driver crossed the curb and lost control and hit a barrier. After returning to the pit to replace the wing, Leclerc dropped to 9th place. Tsunoda continued to overtake Vettel to 6th place. Light rain will affect the last 1-2 laps, but only in part of the track. The Red Bull duo crossed the finish line in 1-2 at the Emilia Romagna GP. Norris is the same, no one bothers and has 1 ticket to the podium. Bottas had no chance of getting past Russell when he was caught in a group that was caught in the ring.

Leclerc found his way up to 6th place, the results were not up to expectations. Tsunoda took 7th place for AlphaTauri in the home race. Both Aston Martin drivers scored in 8th and 10th place. And finally Magnussen continued to bring points for Haas.

Crossing the Atlantic, the next stage will be a completely new track in Florida, USA. A new era of F1 at the Miami Grand Prix, let’s watch Formula 1 Crypto.com Miami Grand Prix 2022 taking place on 3 days 7-9 May.

(Sports news, F1 racing news) The rain continued to affect the main race at Imola, at the same time “ruining” the party of the host team. Ferrari was hoping for a…