(Sports news, F1 racing news) There is not much time to enjoy the victory or think about the defeat. At the end of the week, the racing teams will enter the 2nd stage of 3 consecutive races.

Perhaps there is no need to mention too much Red Bull and Verstappen anymore. The Dutch champion’s performance in Belgium last weekend shows that he and the team are at their best in more than a decade.

Verstappen and Red Bull are unstoppable!

Numbers like winning 2 consecutive races when starting after 9th place, or winning 9th time after 14 stages this season… perhaps not as meaningful as now on the personal leaderboard, the score gap compared with 2 racers chasing 93 (Perez) and 98 points (Leclerc) respectively. Verstappen seems to be playing at a completely different level from the rest. So the question is with the remaining 8 races, when is the time when the defending champion successfully defends his throne.

The problem for the Austrian team at the moment is the information that they are violating the budget limit for car development this season. Or after the “new technical directive” takes effect from the Belgian leg, with the goal of limiting the phenomenon of porpoising. The question is, is Red Bull running with a completely new chassis compared to the previous Hungarian stage!? Of course it will be difficult to have an exact answer, as long as it passes the FIA ​​tests it is still … legal!

After the absolute advantage at Spa-Francorchamps, the next round of the triple-header follows at Circuit Zandvoort – Verstappen’s home ground – the Dutch driver will know what to do to win. The track structure requires high downforce and low speed corners. But the RB18 with the number #1 can absolutely win. 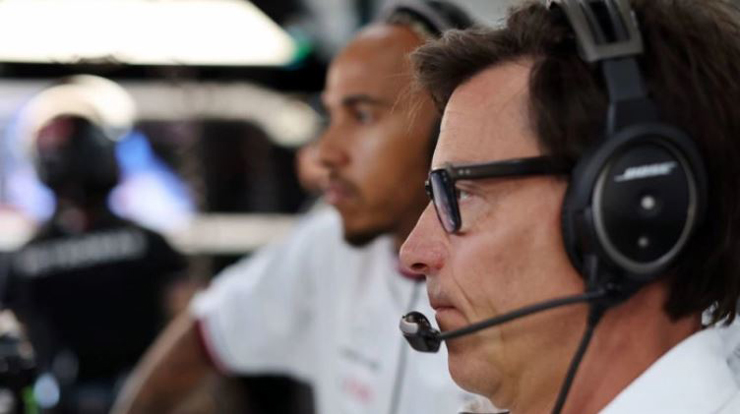 At the start of the season, the W13 was one of the most porpoised cars. Mercedes is one of the most active racing teams in lobbying for intervention from the FIA ​​for a new technical directive, effective since the Belgian stage. If you look back at Hungary, “Silver Arrows” have shown an amazing performance with dual podium for their two handlebars. With the application of the new rules, it is completely reasonable to believe that they will return to competition for the first stage victory of this year.

The belief that he would win the race soon collapsed after the ranking session at Spa on Saturday, where through the internal communication system, Hamilton, knowing the time gap between himself and his opponent, had to ask in surprise. : 1.8 seconds??? Obviously the former king couldn’t believe Red Bull could make such a big difference – or in other words, such a poor W13!

After the beginning of the season, the goal that Mercedes struggled for, lobbied for (new technical directive) – when applied completely failed, they returned with a disappointing performance. like the first time. And even more ironic when Red Bull seems to be the beneficiary team, when this team’s car “as if from another league”. The disappointment is probably over, leading Mr. Wolff to think that the team needs to accept reality, and look to the W14 for the season …. 2023!

There is only one consolation for the German team, which is that they can compete equally with rival Ferrari for 2nd place in the team category. After the collision caused Hamilton to be disqualified from the race. Russell had a challenging chase with Sainz towards a podium.

Although car #63 started the race with some difficulty to maintain tire performance. But then the young driver had a good performance, the car operated as expected. Perhaps the pressure made him make mistakes in the last laps, so there was not enough distance to put pressure on the Ferrari driver, and missed the opportunity to appear on the podium.

With the status quo, Mercedes needs to make positive changes in the two immediate races, aiming to be on the podium and narrow the gap with rival Ferrari. 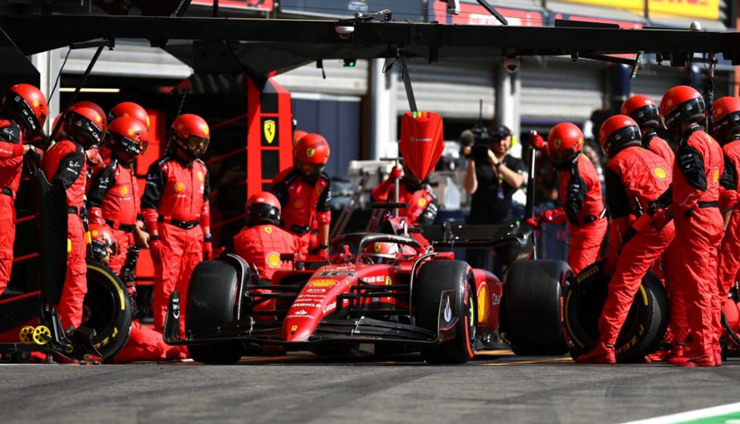 Ferrari’s problem is not on the track, but on the technical team

How about Ferrari, starting with excitement, ending the early season disappointing, expected to return … full of strength after the mid-season break. But it’s all just wishful thinking!

The F1-75 is a car that is highly compatible with different types of racing – that was before the new technical directive was applied. Their engineering team thinks it won’t affect the car’s current design too much.

Then, when applying the new regulations, and if you review the data at Spa, you can see that the RB18 has a lower downforce (F1-75), but it has very good speed at fast corners. medium – where more compression is required. The same thing happened in Hungary and to some extent in Austria before that. It all points to one fact: Red Bull is the better performance car.

Another reason to prevent Ferrari from moving forward, which has been mentioned too many times, is the extremely unreasonable strategy that has taken place since the beginning of the season until now, extending through the holiday.

While the racers were running at a speed of nearly 300km/h, the technical team exchanged/questioned the driver with long conversations about which tires should/should not be used. The driver has a good feel for his tires at the moment, but the technical team has a more holistic view. Instead of making the right decision, the team “talks” with the driver – right in the race – whether they can fully focus on the race or not, not to mention the safety factor!! !

Tactically, is it really necessary to try to get 1 point from the fastest-lap when Leclerc stops changing the Soft tire in lap 42? When the distance with the driver Alonso in the back is equal to the minimum time to pit-stop, when all subjective errors can occur when stopping the car! Remove the sensor error cause, because it speeding Monaco driver in the pitlane resulted in a +5 second penalty and lost 1 place with 2 points. Is it worth looking for a score that is unlikely to be obtained, in exchange for a full score can take twice as much!

Instead of blaming Spa for adding to the F1-75’s flaws, the Italian team needed to change their tactical thinking and make constant mistakes. Red Bull or Mercedes are not Ferrari’s main rivals this season, but their biggest rival is … themselves! Forget about the title conquest this season, because now with such a point gap, the right to self-determination is not in their hands. Perhaps Ferrari’s competitive attitude in the next 2 stages is only worth slowing down the opponent’s coronation time.

Circuit Zandvoort is Verstappen’s home ground, so it is difficult to believe that the Italian national anthem will be played at the end of the race. Ferrari should focus on maintaining the upper hand against challenging pursuer Mercedes. Gone are the days when they competed for every meter of the track, because Alpine was ahead

Alpine (115 points) and McLaren (95 points) head to the Dutch GP with mixed emotions and are both tied to the number 4. They compete with each other and now the British team is away from 4th place on the table. race team overview. The reason is that they had the 4th time empty-handed this season in Belgium last weekend, while the French team firmly established this position when creating a distance of up to 20 points compared to the opponent thanks to the 4th time both drivers. their scores together for the year.

After the holiday, the MCL36 did not live up to expectations. At Spa it has very low traction, which is the main reason their speed on straight sections is so slow. Engineers and racers have calculated many tactical options to change the unsuccessful ranking. The forecast is not too speed-oriented at Zandvoort at the weekend, but the McLaren duo will probably once again see the opponent widen the gap on the leaderboard. Because at the moment, Alpine is in exactly the position they deserve – the strongest team in the middle, the 4th strongest team. Will Magnussen bring Haas back

The top 5 teams race in the bottom half of the standings, with both Alfa Romeo (51 points) and Haas (34 points) slowing down after 3 races with nothing. The gap with the top 2 teams is difficult to bridge, so perhaps they should determine the goal of maintaining the current ranking. In this respect, Alfa Romeo has the most advantage, as their scores are relatively large behind the teams behind. And Williams is sure to take the place when he has only 4 points thanks to Albon’s individual achievements.

With Haas, fortunately in all three stages empty-handed, the Aston Martin (29 points) and AlphaTauri (24 points) teams both scored meager points. If we consider that Mick Schumacher often plays up and down, Magnussen’s failure to get good results in recent stages leads to the team slowing down.

At the weekend, the goal of earning points for Haas will not be easy for both Magnussen and Mick. Because there are many drivers like Bottas, Gasly, Vettel are always ready to take a place in the top 10. If only 1 of the above drivers scores, it will be their success. Because in addition to having to compete with each other, this group of drivers also has a big challenge from McLaren’s Norris and Ricciardo duo.

Circuit Zandvoort is a low-speed track, with a combination of medium and low corners, requiring large downforce. Last season Verstappen won pole and won at his home race. With the current strength, is there anyone who can stop him and the racing team from repeating the above achievement? When standing on the sidelines of the title battle, Ferrari will show how much pressure from Mercedes. The second race in the Triple-header series will answer some of these questions. Watch the Dutch GP 2022 with the 7th qualifying round and the main race on Sunday, September 4, 2022, with the same time frame at 20:00 (Vietnam time) (Sports News – F1 Racing News) Max Verstappen after a “walk” at Spa-Francorchamps, the defending champion with confidence and comfort returned to his hometown, where the second round took place…