The evening at Jeddah began with a lap of the FW07, the car of the late Frank Williams, also the founder of the Williams team. He passed away suddenly just a week before the race started. The tribute was followed by the “We Race As One” campaign and the Saudi national anthem.

All the riders in the left row, the first starting row use Medium tires. The rest are only Norris with Soft tires, Ricciardo, Sainz and Vettel with Hard tires. Hamilton, when leading the warm-up round, was always slow, waiting for the next group to catch up before returning to the starting position. And with the last Haas couple back, all ready, waiting for the signal to start.

The two Mercerdes sped away, leaving no room for Verstappen to pass. Pérez was about to get past Leclerc, but almost ran into his teammate and had to back away. Norris with the advantage of Soft tires has risen to 6th place, Ricciardo has also risen to 9th place.

Round 5, the distances gradually stabilized in the upper group. Hamilton leads Bottas by 1.4 seconds, and is 1.1 seconds ahead of Verstappen. Sainz is booming in the latter group, the Ferrari driver just overtook Alonso for 11th place. Ricciardo’s Hard tires are getting faster and he’s just overtaken Gasly for 8th. 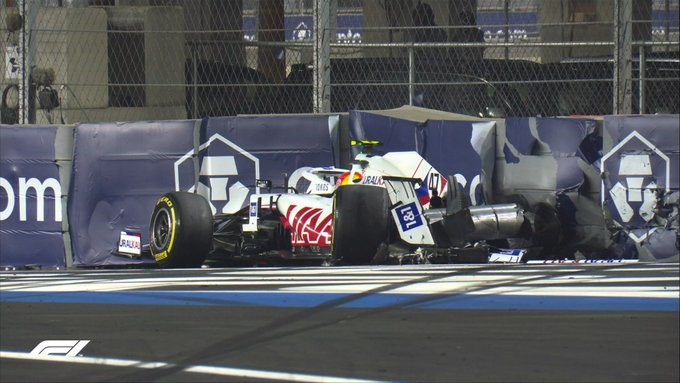 First accident of the day

Round 10, Safety Car appeared because Schumacher crashed into the barrier at turn 23. The situation happened similar to Leclerc in FP2. Mercerdes brought in both of their riders to switch to Hard tires while Verstappen remained out. Leclerc, Pérez, Norris and Alonso also appeared in the pit.

Both Hamilton and Verstappen complained about the Safety Car’s speed. In addition, before Bottas entered the pit under the yellow flag, the Finnish driver slowed down to change the tire smoothly. It is very likely that Bottas will be penalized for this behavior.

Round 14, the red flag was raised. And the advantage turned to Verstappen when the drivers could freely change tires in the pit. Things can change when another incident occurs. In the latter group, Ocon moved ahead after the top 3, Ricciardo 5th. 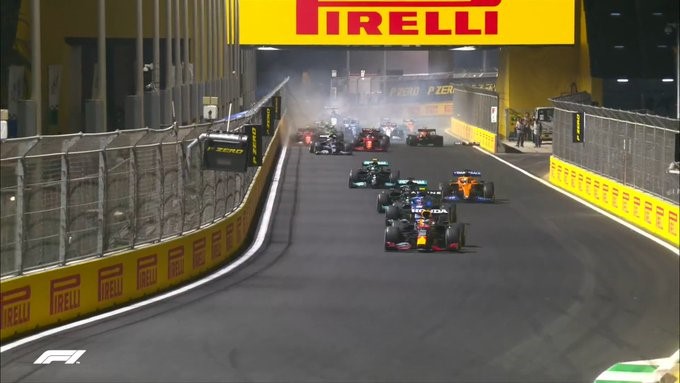 Chaos in the 2nd start

Verstappen changed to brand new Hard tires, and Pérez, although he changed Hard tires before, changed to Medium tires. The race will continue after the light signal. Safety Car led the racers through the second warm-up lap. A slight delay as the last group was still not in position. Only 19 riders left, waiting for the second start.

Hamilton had a better start this time, but Verstappen crossed the second corner across Hamilton. Ocon took the opportunity and took the second. Behind, Pérez pressed Leclerc’s path, and the Mexican driver collided and rotated across the road. Russell then slowed down to avoid the crash, but Mazepin failed to react and crashed into the Williams in front. No riders were injured and the red flag was once again raised. In the pit lane, Red Bull was suggested to go back behind Hamilton after the previous overtake. And as the race continues, Ocon will lead Hamilton with Verstappen. Everything was resolved smoothly before the stewards got involved. And there are only 16 riders left to head to the starting area, preparing for the 3rd rush of the day.

This time Hamilton was caught between Ocon and Verstappen entering turn 1 and had to back up. Top 3 is back as before. Gasly is back in 6th place, Giovinazzi is having a great race in 7th place. Round 23, Tsunoda collided with Vettel and lost his front wing. Virtual Safety Car has been deployed, helping rookie AlphaTauri return to the pit safely. Tsunoda after colliding with Vettel

The collision caused extensive damage to Vettel’s vehicle. And Tsunoda will also be penalized for 5 seconds. Round 28, Räikkönen entered the pit, replacing the front spoiler after a collision with Bottas. VSC has returned to recover debris from the collision. The pauses will help the Medium and Hard tires last longer.

Round 33, VSC ended and Hamilton was far behind once again. After 3 laps, the debris continued to appear and a short VSC interval to recover the obstacle. Round 37, Hamilton attacked to first place, Verstappen cut across the first corner, successfully defending the leading position. Then Red Bull asked Verstappen to give up his position, but Hamilton did not understand what was happening, and crashed into the left rear tire of the Dutch driver. 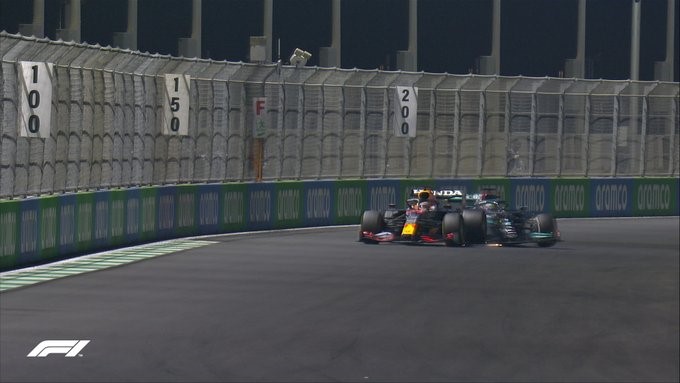 The most controversial situation in the race

Hamilton’s front wing was damaged and remained in second place. On lap 43, Verstappen relinquished his position again, and immediately regained it through the 27th corner. Then a 5-second penalty was given by the steward to car number 33 for leaving the track to take advantage. In addition, the subsequent 1-lap collision phase will be investigated further later.

After the penalty was handed out, the main road Hamilton crossed over and led the Saudi Arabian GP. The gap with Ocon behind has also been reduced, the time frame for Verstappen’s tire change is no longer available, so the fastest lap point will still belong to Hamilton. Round 46, Vettel finished the race early, and Alonso changed the Soft tires again. Hamilton crossed the finish line, leveled with his opponent in second place, and became the first Saudi Arabian GP winner. Bottas overtakes Ocon at the last moment and will celebrate with his teammates on the podium. Ricciardo finished 5th from 11th. Gasly returned to his original position, followed by the Ferrari duo, Giovinazzi in 9th and Norris as the final driver in the top 10.

Abu Dhabi is the ultimate destination. The top two drivers are both on 369.5 points, and Verstappen has more wins. Also, the event isn’t over yet. The post-Saudi Arabian GP was still there while the steward was working with Verstappen and Hamilton.

Coming to Yas Marina with a little novelty, what will the end of this race be like. Watch Formula 1 Etihad Airways Abu Dhabi Grand Prix 2021 taking place from December 10.