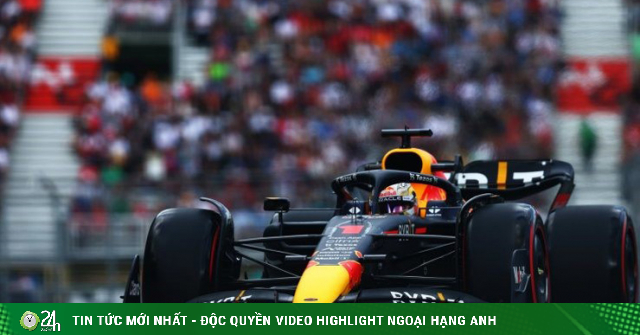 (Sports news, F1 racing news) The champion and leader of the rankings, Max Verstappen has had a dream start in his return to Montreal, Canada for the first time since 2019. The Dutch driver is a successful person. The best performance after 2 test sessions while his main competitors all faced certain disadvantages. It is also an opportunity for the top middle to rise this weekend.

Max Verstappen complained of running out of battery power at the end of the straights, but still managed to set a 1min 15,158s lap at Gilles-Villeneuve and was the fastest FP1. Red Bull’s steering wheel is 0.246s faster than Carlos Sainz (Ferrari) in 2nd place.

Both riders achieved their best on Medium tires. Meanwhile, Fernando Alonso (Alpine) unexpectedly ranked 3rd and displayed fast and stable speed in the long-run (testing for the main race).

Sergio Perez ranked P4 on the 2nd Red Bull and Charles Leclerc was 0.508s slower than Verstappen and accepted 5th place. The driver of the “war horse” has changed the internal combustion engine (ICE), MGU-H, MGU-K and new electronic control (CE) before FP1 without penalty.

However, after the end of the sixth day, Ferrari confirmed that the Monaco steering wheel will be fined 10 steps for replacing the third new CE detail, exceeding the specified number of 2. It is likely that Ferrari will continue to replace it. Details left tomorrow.

Another driver who will also have to start at the end of the race is Yuki Tsunoda when AlphaTauri replaces the entire engine for him, including 6 parts ICE, TC, MGU-K, MGU-H, CE (all new details). 4th of the year, exceeding the regulatory limit) and power reserve (ES) along with the 5th exhaust this season. 4 penalties for 4 new violations mean that the Japanese driver will start last in the race Sunday afternoon. Alonso was in the top 5 in both runs

Returning to FP1, George Russell once again ran faster than teammate Lewis Hamilton – standing in P6 and P8 respectively with a difference of 0.7s. Host country driver Lance Stroll (Aston Martin) alternates between two Mercedes in 7th place. Sebastian Vettel is not far from his teammate in 9th place while Daniel Ricciardo (McLaren) has a rare start of the race. racing for a place in the top 10. Lando Norris (P12) was not so lucky as he completed the fewest laps – 17 laps, and spent the last few minutes of FP1 in the garage.

The AlphaTauri duo ranked 11th for Pierre Gasly and 14th for Tsunoda. Alex Albon got off to a trying start with a P13 for Williams, while Nicholas Latifi finished 19th in the first stage of F1 at home. Alfa Romeo and Haas have the second consecutive race in the final group of the race. 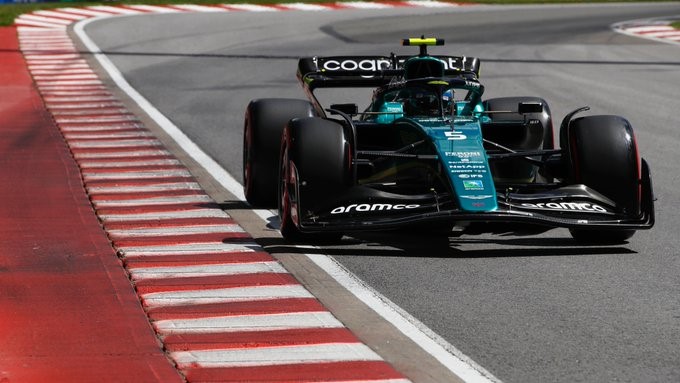 Vettel ranked P4 in the end on Friday

The #1 handlebar of the “bull” improved performance and continued to take the 1st place with a 1 minute 14,127s record on new Soft tires. However, Leclerc also proved to be no less competitive when only losing 0.081s in P2 followed by Sainz with 0.225s slower.

Surprisingly at FP2 was the Canadian GP 2018 champion – Vettel on the AMR22 achieved the 4th fastest, only 0.315s behind Verstappen. Alonso maintained a steady fast pace to finish 5th and finish 6th day successfully. Gasly placed 6th, but ran off track on the last chicane bend and didn’t come back on track. That caused the French driver and the Aston Martin duo to be investigated by the referee and given a warning penalty.

Russell and Norris placed 7th and 8th respectively, meaning that there are 7 different teams in the top 8 fastest drivers, and the difference is only 0.860s. Ricciardo had another good run to finish 9th and Esteban Ocon finished the top 10. 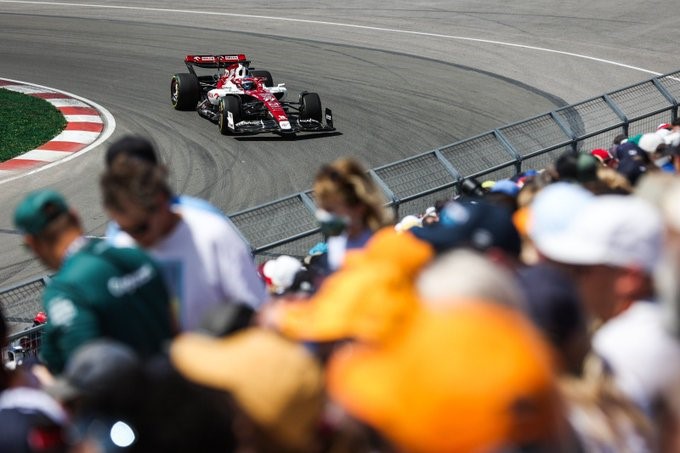 Alfa Romeo has trouble when Bottas has no record in FP2

Perez has a very bad sector 2 record on Soft tires, making him only 11th. He stands above Stroll and Hamilton, Mercedes steering wheel uses back to the standard floor (like Russell) instead of using the version with holes cut in FP1.

Kevin Magnussen and Mick Schumacher played better for Haas despite only P14 and P15 results. Chau Quan Vu placed 16th and Valtteri Bottas was unable to establish a record at FP2. He ran 3 laps, but the racing team called back to the pit after each lap when they discovered a problem on the car.

Tsunoda ran a test program that focused on long-run data (37 laps) because he was sure to start last, so he only ranked 17th. Williams’ duo took the last 2 places, just above Bottas.

Thus, Verstappen has a great opportunity to win the pole when other opponents are having problems of their own. Mercedes will not easily get a position in the top 5 with the rise of Alonso or Vettel. The important qualifying run will take place at 3 am on Sunday, June 19.

Detailed results of two runs on the 6th day: (Sports news – F1 racing news) Circuit Gilles Villeneuve returns after 2 years of absence. Red Bull is moving forward, see what Ferrari can do to stop the competition in the Canadian GP…