(Sports news, F1 racing news) Experiencing a breathtaking race, Carlos Sainz transformed the pole position into the first F1 victory of his career. Along with that are Sergio Pérez with a comeback from the bottom and Lewis Hamilton, who officially holds the record with 13 podium steps at Silverstone.

Closing this weekend at Silverstone is the official race with a attendance of 142,000 spectators, bringing the total to more than 401,000 attendees this weekend. Forecasts say this is a dry race, however there is still a 20% chance of rain falling on Silverstone.

Verstappen couldn’t wait to get started, having already edged Sainz by a distance in the warm-up lap, but then the Spaniard returned to lead the team while the racers warmed up their tyres. Return to position, the green flag has waved and the signal light is counting down.

Verstappen had quicker reflexes, taking the lead. Hamilton also rose to 3rd. But in the back, the big accident happened. The red flag was raised.

Zhou’s car rolled several times on the track, headed straight for the fence and got stuck behind the tires. Russell, Tsunoda, Albon and Ocon were also affected in the accident. Albon and Zhou were taken to be examined and assessed for their health condition. 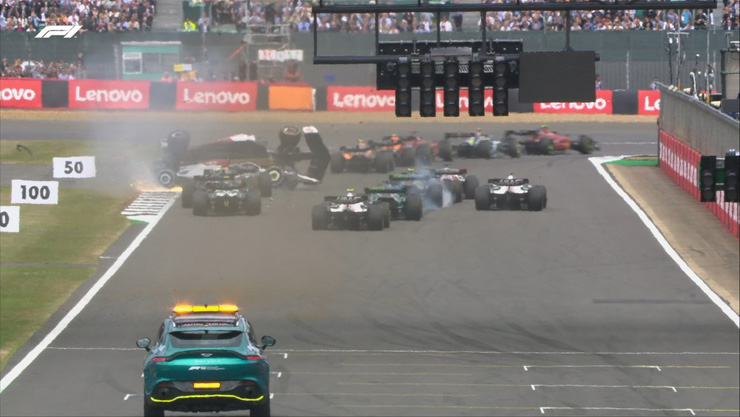 Albon had a collision with Vettel while Zhou collided with Russell. The rescue side also responded that the Alfa Romeo driver was stable and safe. Except for Norris and Ricciardo, the remaining riders all changed their current tires for the start.

The race resumed at 3:56 p.m. local time, and the starting order was changed back to the original. Only 17 cars remained, gradually returning to the starting area, preparing for the second departure.

Having learned from the first time, Sainz pressed Verstappen almost close to the fence when approaching the first corner, preserving his position. Hamilton fell behind Norris this time. Meanwhile, Leclerc and Verstappen had a slight collision. Pérez was also a victim when his spoiler was damaged and had to go to the pit to replace it.

Chaos in the top group

Round 7, when Norris had no more DRS to defend, Hamilton easily passed, in front of him was a clear road to chase Leclerc’s 3rd place. By lap 10, Sainz made a mistake, paving the way for Verstappen to rise to the top of the race. At the 3rd corner, Tsunoda collided with his own teammate, causing the AlphaTauri duo to fall behind the race.

Verstappen’s tires appear to have problems, the defending champion also has difficulty on the pit entrance. Two Ferraris return to the top of the race. Tsunoda was given a 5-second penalty after colliding with teammate Gasly himself. While Leclerc was unhappy with Sainz’s lead, Hamilton continued to score the fastest laps and gradually shortened the gap.

Round 21, Sainz entered the pit, “dropping” for Leclerc to lead. Bottas and Ricciardo also appeared in the pit. And those are 2 DNFs for Alfa Romeo, continuing to be a technical problem. Hamilton flew like flying, shortening the distance to less than 2 seconds. Meanwhile, Pérez had caught up to Verstappen, who was trying to maintain position with his damaged car. 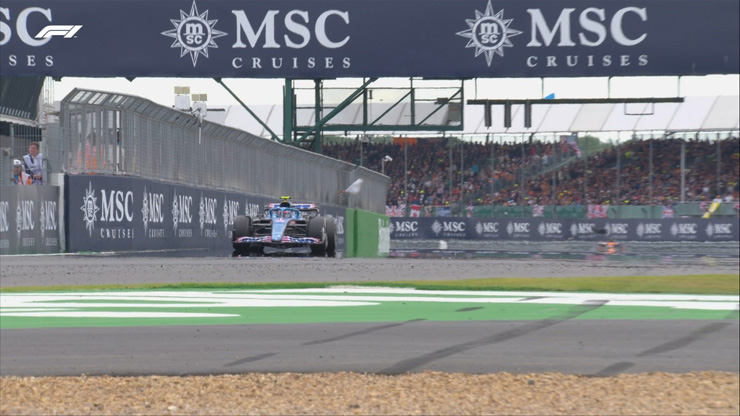 Round 24, Verstappen entered the pit, switched to Hard tires, returned to 7th place before being overtaken by Vettel. Leclerc then went to the pit, putting Hamilton at the top of the race. Round 27, Gasly received the black/orange flag and returned to the pit, being the next driver to finish the race here. Meanwhile, the Mercerdes driver was very comfortable with the condition of the tires and continued the race. The audience enjoyed and enthusiastically responded.

Sainz restrained Leclerc and was ordered to give way. Leclerc took the lead with a distance of nearly 19 seconds from Hamilton. Round 34, Hamilton entered the pit, made a slow stop and returned to 3rd. Ocon chased closely with Verstappen, overtaking the 15th turn.

Red Bull revealed Verstappen had damage to the floor of the car. Meanwhile, Ocon stopped at Copse on lap 38. And the Safety Car was on the track. Many riders took advantage of the opportunity to change to Soft tires to complete the rest of the race.

The race returned after Safety Car left at the end of lap 42, with the last 10 laps for place competition. Sainz took the lead through the sixth corner, but Hamilton seemed distracted and left behind by the Ferrari pair, and was overtaken by Pérez. The Mexican driver forced Leclerc out at Luffield, and Hamilton took the opportunity to rise to second. Not stopping there, Pérez retaliated, forcing Hamilton out of the third corner, and the Mercerdes returned to position. Wednesday, where Alonso is ready to attack. Now it was Leclerc’s turn to defend the podium against Hamilton, but with the advantage in tires and DRS, Leclerc could only watch the other Mercerdes pass. In the back, Schumacher attacked the defending champion with DRS, but the gap was still too far.

From the first pole position in his career, Carlos Sainz successfully transformed into the first victory of the Spanish driver’s career. Pérez and Hamilton were also present on the podium, and the Mercerdes driver stepped on the podium 13 times at this Silverstone. A new record belongs to Hamilton. Leclerc secured 4th place ahead of Alonso. Norris finished 6th at home.

Verstappen defended his position to the last corner, finishing just 0.2 seconds ahead of Schumacher. Vettel celebrates 35th birthday with 9th place at Silverstone. And finally in the top 10 is Magnussen, both Haas drivers have points in this race. In addition, Hamilton won the fastest lap in the last lap. Return to the Red Bull Ring in the next round, where the Sprint format returns. With a great race at Silverstone, look forward to an even better weekend in Austria. Watch Formula 1 Rolex Grosser Preis von Österreich 2022 with the first run starting at 6:30 pm on July 8. (Sports News) F1 driver has just had a recent accident, Zhou Guanyu announced the good news on his personal page.