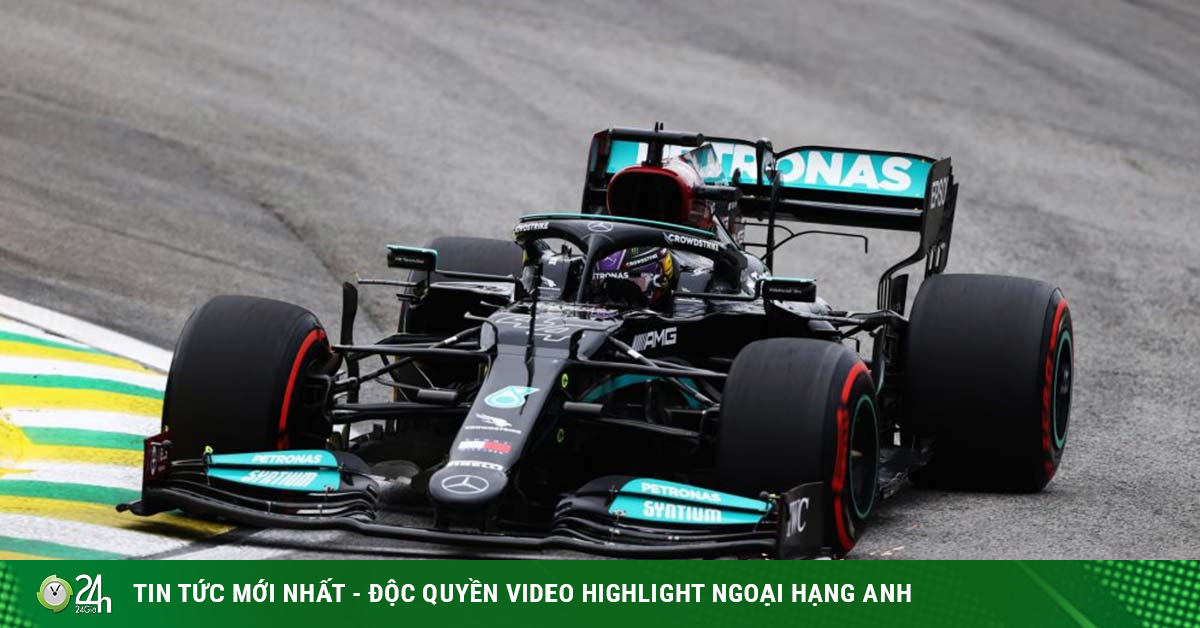 (F1 racing news) Lewis Hamilton got a new internal combustion engine, got demoted 5 places, completely dominated the race on Friday, and will start first in the 7th qualifying race. Opponent Max Verstappen with a 19-point advantage will start second against Valtteri Bottas.

The 2nd race in the triple-header has finally come. Welcome to Formula 1 Heineken Grande Prêmio De São Paulo 2021. Although there are currently no Brazilian drivers appearing in the next race, but with 2 championship matches still undefeated, this will still be 1. The race to look forward to.

The qualifying race will return one last time before the end of the 2021 season. That means that the racing teams only have this test session to prepare for the qualifying race. The weather in Brazil often plays an important role in the final result. The chance of rain falling on the first session is 60%. The forecast for the current race weekend is still going to be dry, but we all know nothing is certain.

The light is green, the pit door opens and Stroll and Räikkönen kick in first. Hard and Medium tires were used during the first laps to double check the vehicle’s settings before starting testing on the Soft set of tires.

Hamilton has continued to replace the internal combustion engine, and received a five-place penalty in Sunday’s race. Could it be the end for the defending champion, or will it be a spectacular comeback? Only time can give us the answer. 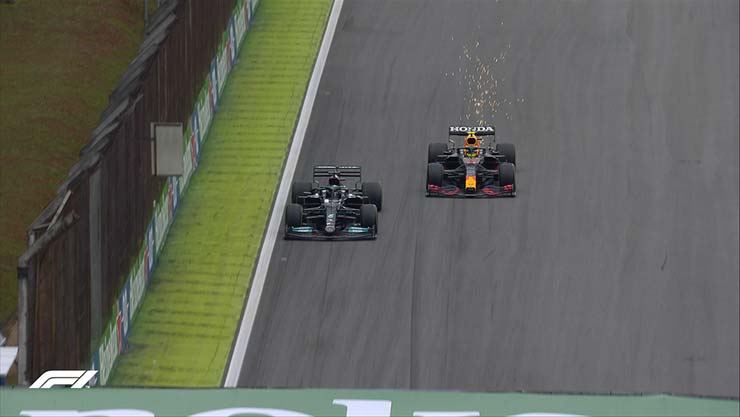 The track started to show signs of being wet, but it was still not enough for Intermediate tires to be used. Half an hour passed, the Soft tires began to appear more. Pérez has shortened the time to 1 second but not fast enough compared to his teammate.

Haimlton is back at the top of the leaderboard with a time of 1 minute 9,348 seconds with just 10 minutes left on the clock. Mazepin also contributed to that run. It can be seen that, like in Mexico, the role of teammates will contribute to deciding the next ranking turn. 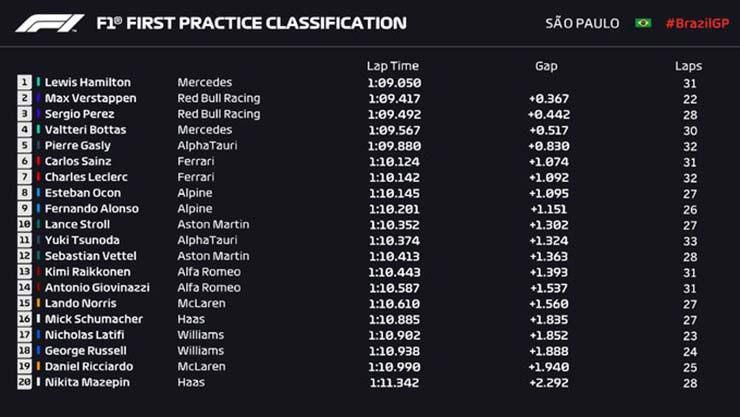 At the end of the session, Red Bull could not improve the time and was the 2nd and 3rd fastest. Bottas was half a second behind Hamilton, and ranked 4th. Gasly kept his form and continued to follow the two leading teams in 5th place.

The next Ferrari duo on the leaderboard. Along with that was Alpine and finished with Stroll in 10th place. McLaren only had the fastest time 15th, and Ricciardo was below the standings at 19th. They and Alpine were two unused racing teams. Soft tires in this run. 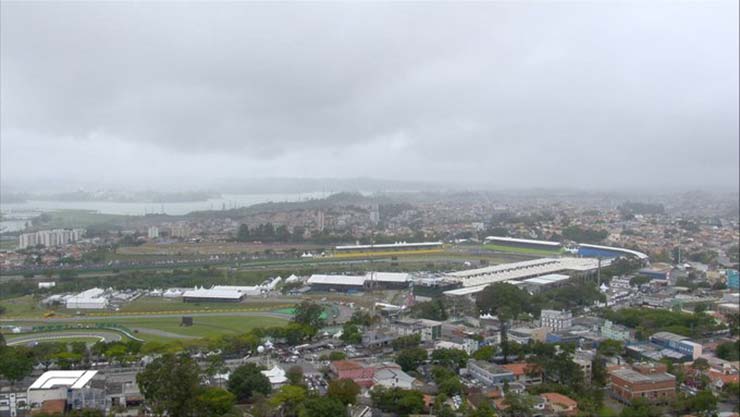 The clouds are always threatening the 6th race

The qualifying session will continue later, with the same rules as usual, but the ranking will determine the starting position for the seventh qualifying race. Podium on Saturday will also receive corresponding bonus points.

It’s 15 degrees outside, and 25 degrees on the track. The probability of rain appearing in the next 1 hour is 40%. Definitely cooler than last week in Mexico. And the track is not too wet for the Intermediate tire to enter.

Two Ferraris opened and led the class. After just 3 minutes, Verstappen led the rankings with a time of 1 minute 9,329 seconds. Pérez couldn’t be faster, and came in third behind Norris. Mercerdes duo ready with Soft tyres. The new engine put Hamilton in the lead and was half a second faster than his opponent. Bottas is just faster than Bottas and comes in 3rd. 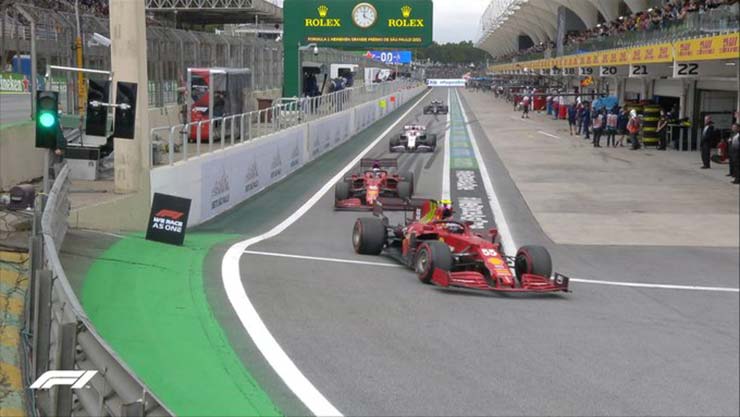 The qualifying session starts with 2 Ferraris

Leclerc, after having his time cleared for exceeding the track limit, is back 1 more time and has the 3rd fastest time on the leaderboard. In the last minute, the dangerous 15th place kept changing hands. The pushed down riders saved themselves on a good lap. Russell was dropped from Q2 by Lafiti himself before being pushed further down the leaderboard.

Stroll, Lafiti, Russell, Schumacher and Mazepin were the names that were dropped from Q2.

Q2 started much more slowly. After scouting, Mercerdes started first, and trailed the other teams after. The defending champion scored the first time, and at the same time fell victim to the 4th corner, exceeded the track limit and had the run removed. While absent, Verstappen easily rose to the top of the rankings. 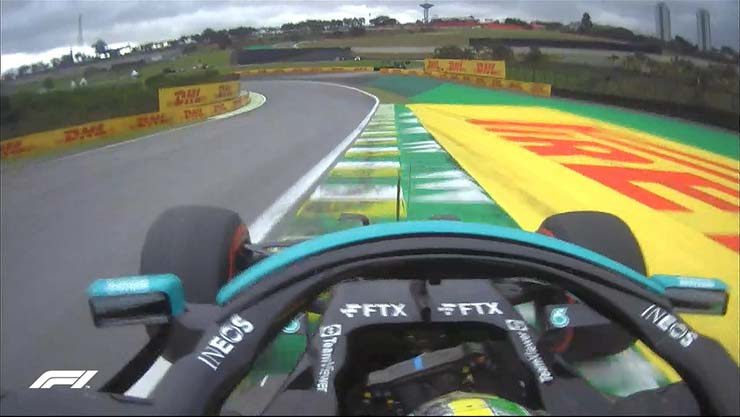 Hamilton’s second run was perfect, and returned to the top with a gap of 0.2 seconds. In the last 3 minutes, the teams all returned to the track for the 2nd run. The Mercerdes duo improved and jointly led the Q2 standings. Alfa Romeo failed to improve the run and both drivers were dropped from Q3.

Continued to be quiet in the first minutes in Q3. Ferrari this time put Leclerc out first, and then Sainz. A convoy followed the two Ferraris later. The driver’s first run from Monaco encountered the other convoy in the final sector and made his time significantly slower.

Hamilton had a purple lap that dyed all 3 sectors and rose to the top of the rankings. Verstappen and Bottas are behind the defending champions, respectively. The 3-minute mark and the racers one last time back on the track. 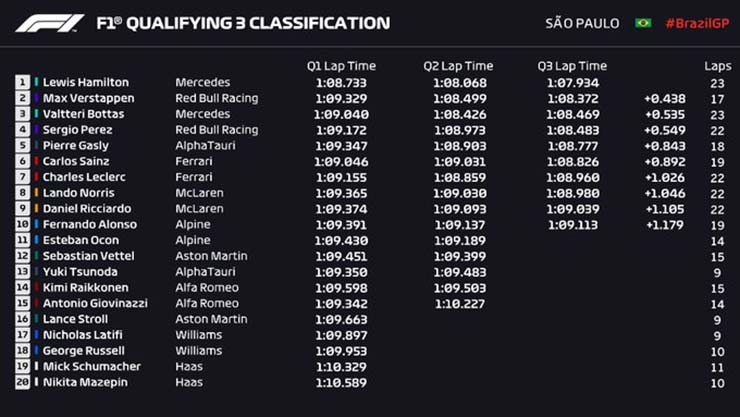 Hamilton finished with a time of 1 minute 7,934 seconds, taking the first place in the qualifying race. he is joined by rival Verstappen in 2nd. Bottas could not improve the time and remained in 3rd. Pérez will follow closely behind in 4th. Starting in 3rd row will be Gasly is with Sainz. The McLaren pair will start behind Ferrari, and Alonso ends up in 10th place.

All ready for 24 qualifying races at Interlagos. The winner takes home 3 pocket points along with the first starting position in the official race. With the exception of Hamilton, the only driver so far will be penalized 5 places thanks to the new engine. Mercerdes successfully led Red Bull throughout this Friday session. (Sports news, F1 racing news) The second penalty at the Autodrome Jose Carlos Pace at the weekend between Hamilton and Verstappen will turn Brazilian…