(Sports News – F1 Racing News) After nearly a month of break, F1 racing will officially return this weekend and the competition between Mercedes and Red Bull will definitely be the focus to watch.

If you can compare the season to two rounds, the end of the “first half” in Hungary more than 3 weeks ago was an unforgettable disappointment for Red Bull and their No. 1 driver.

Competition throughout the 2021 season!!!

Leading by 32 points, but after only 2 races in England and Hungary, 8 points behind the direct opponent, it was a defeat that was not easy to swallow for Verstappen. Two races, and scored only 5 points, both races stem from collision incidents with a Mercedes.

From there, when the “second half” started, the Dutch driver set his mind high for the race in Belgium, when he thought that he would consider this as the starting race for a new competition. Because perhaps the last break will give Red Bull and Verstappen the opportunity to correct mistakes, to turn the situation around. The goal of the “Red Bulls” team is to optimize the performance of their RB16B to create an edge on the track.

In particular, the recent stages that Verstappen have not had good results, the objective factor is more than the subjectivity of this individual racer. So a comeback at this point would be a huge morale booster in the latter part of the season.

At Spa, Red Bull will need to solve the problem of choosing a wing with moderate compression to gain an advantage in sectors 1 and 3, but the drawback is that it will not be optimal in sector 2 – equivalent to nearly half a lap. . Or vice versa, accept the disadvantage in the other 2 sectors and create an advantage in the 2nd partition!? Last season, they had a disadvantage in terms of maintaining tire performance, and if this problem is solved, it will be an insurmountable challenge for the opponents. 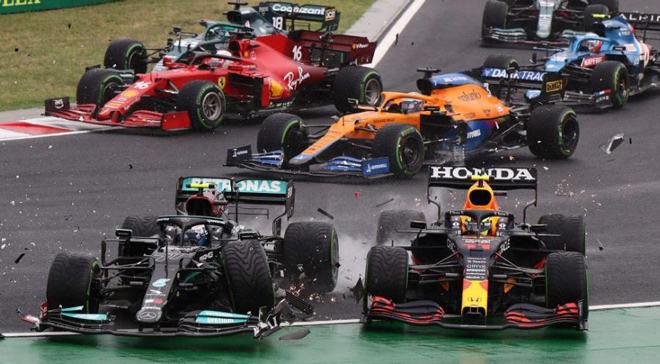 In addition, Red Bull has additional reason to worry, the collision of Verstappen in the UK, or both this driver and Perez in Hungary could damage engine components. They may face the risk of needing to replace new components, and incur penalties – it will be a big loss in the competitive efforts of the Austrian team!!!

Mercedes is also in an uncomfortable mood, because perhaps the first half of this season is considered the most difficult for them since 2014 to date. Only with Hamilton’s 2nd place in Hungary can they return to the top of both individual and team rankings.

The German racing team understands that the battle for the throne this season has a long way to go. They’ve got their current vantage point thanks to the season-only upgrade package at Silverstone, plus a somewhat lucky race in Hungary.

Mercedes thinks they always deserve to be at the top after half of the season has passed. Because if Red Bull is unlucky in some races, so are they. They can win in Monaco, Baku but lack the luck to be able to win it.

The Mercedes team leader said that Red Bull and Honda have had a strong start, at one point they were ahead of the German team, but now the two teams are in an even position. Mercedes will find a way to overcome the opponent in each race, before thinking about the championship at the end of the season.

The “Silver Arrows” engineers understand that the performance of the opponent’s engine is now almost the same, so the aerodynamic package plays an important role in each specific race.

From the upgrade package in the UK, it seems that they have found a way to reduce the impact on tire degradation from the low ground design on the W12, the racing team has flexible adjustment of the wing at each race. specifically to maximize benefits.

Mercedes also has an advantage when they own an experienced driver like Hamilton. In the context of almost both of these drivers winning the majority of races this year, and it can be said, whoever makes the least mistakes will be the winner in the end.

But perhaps because of too much focus on the competition this season, the German team is currently not focusing on the staffing for the next season, which could be a disadvantage for them in the team title race with Red Bull. If forced to choose, perhaps Mercedes will focus on the Hamilton – Verstappen fight more!? Exciting matchup between Ferrari and McLaren for 3rd place

More than just the championship title, Ferari is creating a fascinating fight in the back. Starting the Hungarian GP with 15 points worse than rival McLaren, then at the end of the race, they are in the 3rd place in the racing team category, although only ahead of the opponent in terms of sub-index, when both teams are in the same position. own 163 points after half the season.

To achieve that, the Italian racing team has shifted its focus to the long-term plan rather than the favorable immediate results. They put their faith in the younger generation like Leclerc and Sainz, even though the results were not satisfactory, and then gradually obtained ‘sweet results’. Even a struggling Carlos Sainz is gradually fitting into the racing team. The passing of Hungary is the first time the Spanish driver is ahead of his teammates with 83 points after half a season.

Results don’t just come from the maturity of the riders. The fact that the Red racing team has made significant changes through adjusting the suspension system, distributing the weight properly to solve the problem of setting the car and maintaining optimal tire performance. Since the bad race in France, then they have had many positive signs. After double races in Austria, then England and Hungary, Ferari caught up with his opponent.

In addition, the racing team is working on optimizing the energy recovery system. Plus the plan they urgently complete to have the last engine upgrade of the year soon. It is expected that this update will be available in Russia, or at the latest, Turkey. Ferari said that this update will bring competition with direct rival McLaren for 3rd place, and approach the two leading teams in the rankings.

McLaren ended their scoring streak in the Hungarian GP, ​​where they fell victim to collisions, and let Ferari catch up. The goal identified by the racing team is to re-establish the scoring streak as they once had, to secure their rankings.

The team’s problem was that the riders had to fully adapt to the MCL35M. If Norris is a concern because the driver is performing too well, then Ricciardo is something to consider. The fact that this season’s car reduces downforce due to technical regulation changes, it makes the Australian driver unable to fully adapt to the car in the new racing team. Both McLaren and Ricciardo need adjustments so that this driver can perform to his full potential.

After the upgrade for the Hungarian leg, there won’t be any major upgrades until the end of the season. Perhaps McLaren will focus on optimizing the current installation package to improve the car’s performance to suit each race.

Let’s wait and see how the confrontation for 3rd place between these two racing teams will go!!! 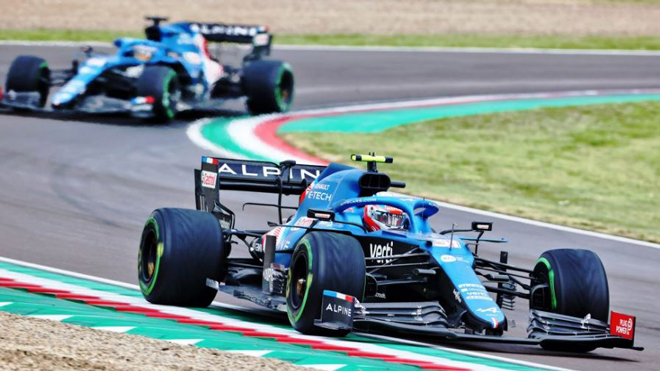 After only one race, the “wind” of Alpine changed the position of the middle top.

Competition between teams racing between

When all judgments (before the Hungarian GP) were leaning towards the possibility of AlphaTauri and Aston Martin vying for 5th place as a team, and Alpine was almost left out of the game, the French racing team had an extremely “makeover” performance. spectacular in Budapest.

With great support from veteran driver Alonso, Ocon had the first victory in his career, through which the duo scored 37 points for the racing team, rising to 5th place in the standings (with 77 points). points, which is almost equal to the number of points they get after 10 races is 40 points). It was probably one of the mid-season breaks that Alpine felt most comfortable with.

Alpine results from the brilliance of Alonso getting back into the game more and more, a young Ocon getting along well with his teammates, a package of chassis enhancements adopted from Silverstone. All of that is creating a challenge for the middle top to compete for the 5th place.

AlphaTauri have always proven they are not an opponent that can be ignored. With 68 points available, they can completely fill the gap with the opponent. Because this Italian team is the only team to date, to have scored in all races this season. As long as Tsunoda plays more stable, the position of this racing team will be different!

The most unfortunate thing for Aston Martin, perhaps, was the cancellation of Vettel’s results in Hungary, which left the team empty for the fourth time in the season. Losing 18 points from 2nd place, which means they are quite far behind the group of direct competitors, when they keep the number of 48 points.

20 points is a gap that is not easy to level, especially not always Red Bull and Mercedes are not present at the top of the race, and as favorable as the last stage does not often happen!

Let’s wait for Aston Martin’s “reaction” in the second phase of the season, to watch the competition of the top teams in the middle group.

Williams took a spectacular step forward when both drivers scored before the break and owned 10 points, ranking ahead of Alfa Romeo and Haas. Now, only the US racing team is still empty, Going to Spa, Mick Schumacher is expected to score points for Haas, following in the footsteps of legend, also his father – Michael Schumacher – who had the first race here in 30 years. prior to.

F1 2021 enters an important period, victories, or mistakes, can greatly affect the end of the season. Watch the triple-header kick off the “second half” with the Belgian GP 2021 race at Spa-Francorchamps during the weekend, with the qualifying round at 8pm on Saturday and the main race at 8pm on Sunday, August 29, 2021. live on Fox Sports. 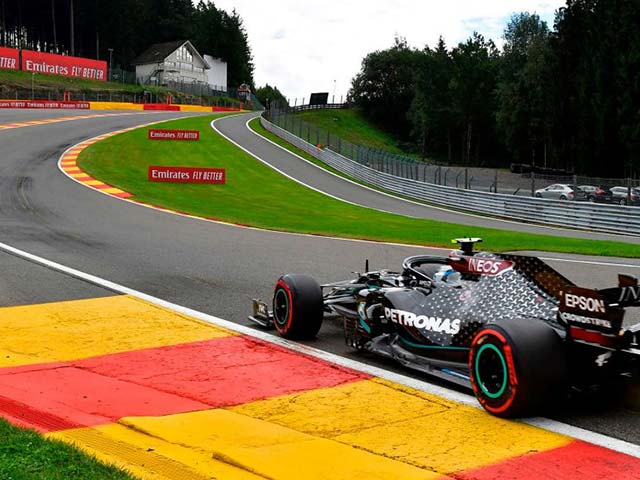