(Sports News – F1 Racing News) The rains have heavily affected the official race in Belgium, making drivers and fans unable to have a full race as expected.

A gloomy Sunday with non-stop rain right at Spa-Francorchamps. As usual, the riders were in front of the starting line for the pre-race ceremony. Spa weekends are always a time to remember and pay respects to Anthoine Hubert, the racer killed in the crash at the 2019 Spa-Francorchamps Formula 2.

With the current state, the starting loop is led by the safety car. This race marks the milestone of 200 starts for Daniel Ricciardo. And he and his teammates will celebrate the 50th race milestone of Lando Norris.

Pérez’s car on the way from the pit to the starting line skidded after the 7th turn and crashed into the barrier at Les Combes. Although the speed was not high at that time, it was enough to damage the suspension system. And the Mexican driver did not start in this race. Räikkönen had to start from the pit due to changing the car’s spoiler in Parc Ferme after the qualifying session.

In addition, Lando Norris was also penalized 5 places after changing the gearbox due to an accident during the qualifying session. Valtteri Bottas and Lance Stroll were given a five-place penalty for causing a crash on the first lap in Hungary. 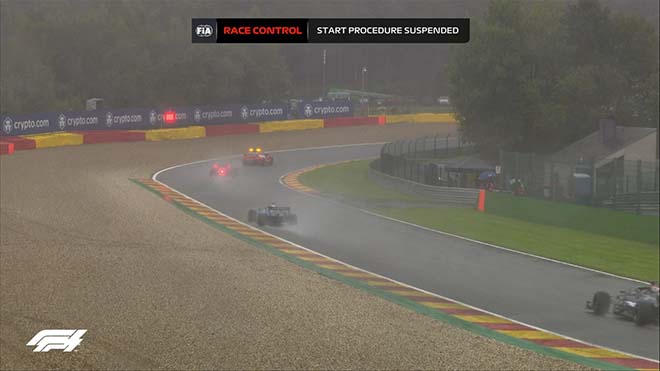 The race had to be stopped due to insufficient safety conditions

Due to bad weather, the departure time was delayed up to 25 minutes. The riders patiently sat in the cockpit waiting to hear the news that the race was postponed every 5 minutes while the other members of the team tried to keep them as dry as possible.

At run time, the safety car led the warm-up lap and for now the car is still out, going as many laps as possible and hoping for a dry run. Verstappen leads and has the best vision and is eager to race. But the red flag appeared and the race had to be stopped due to not ensuring safe visibility while racing. Visibility is very limited in the rain

Pending information, Red Bull tries to convince the FIA ​​to allow Pérez to race if they can fix the car in time. Afterwards, race chief executive Michael Masi confirmed Pérez could start from the pit lane.

But limited visibility prevented the race from starting. The option of racing again the next day is also suggested, and is the most feasible option, but not necessarily ideal. Masi confirmed that it takes 2 laps for a race, even if it’s behind a safety car. The executive board stopped the clock at the 1 hour mark for a total of 3 hours of the race. And the remaining time is only enough for 1 hour of racing, the operator will give the number of laps suitable for the available time. 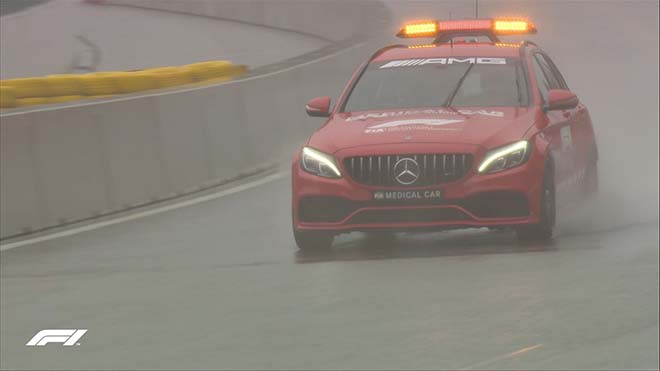 After a very long time, the race also had a start time 3 hours 17 minutes after the original scheduled start time. Verstappen returned to follow the safety car leading the race. There will be 39 laps but the operator has confirmed 1 hour countdown and only 53 minutes left when the riders complete 2 laps, and sure enough half point will be awarded when the time is between 2 rounds up to 75% of the total number of rounds.

Once again, red flags were raised as the condition did not improve. In the end the race will not continue. Officially Verstappen won the Belgian GP and joined Russell and Hamilton on the podium. This is really great news for Russell and Williams. 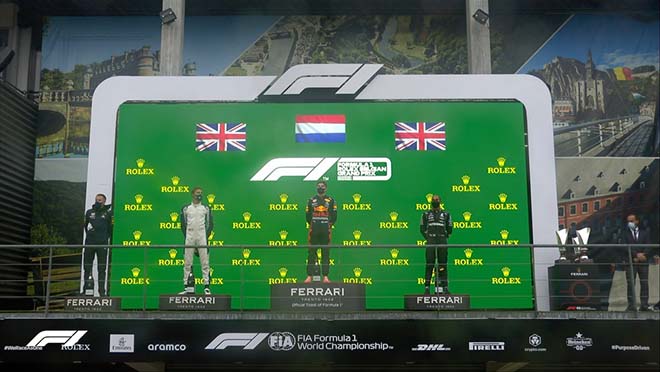 Russell suddenly appeared on the podium

A really tiring day and also full of regrets. Pérez is perhaps the biggest loser, going from the top 10 and through an accident on the way to the starting line becoming the last place. But it is also impossible not to mention the dedication of the audience. The fans waited patiently for 4 hours and always supported the riders. 10 riders get half of the Belgian GP

This is the 6th race in history where only half of the points were awarded due to the influence of rain and the most recent case took place in Malaysia in 2009.

Closing out a tough weekend, the next venue will be the return of Zandvoort, next Sunday, and promises to be intense, at least compared to the Belgian GP race on Sunday 29/8. . 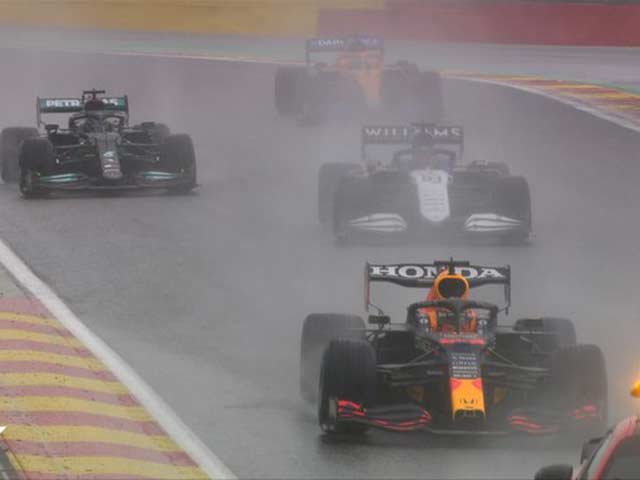