(Sports news, F1 news) Perez led the race from the first lap, and Max Verstappen led a perfect 1-2 win at the Azerbaijan GP, ​​while both Ferrari drivers were DNF, paving the way for their next podium. George Russell.

It was a hot and sunny Sunday with an outdoor temperature of 25 degrees. The racers appeared with cool shirts and umbrellas while the Azerbaijan national anthem played.

Completing the preparations, all 20 cars started rolling, entering the warm-up round. One of the longest laps, the racers slowly, trying to find a way to maintain the optimal tire temperature. Schumacher returned last. The green flag was waved and the signal light was on.

Leclerc started from the pole, but did not accelerate enough from the start, there was a situation where the brakes locked when entering the first corner, Pérez started well, followed his opponent and took the opportunity to rise to the top of the race. Fortunately for Ferrari’s driver, he still managed to secure second place under the pressure of Verstappen.

Vettel has found a chance to surpass Tsunoda. Those are the only two changes in the top 10. The lead was taken advantage of by Pérez and quickly increased the gap to more than 1 second. Immediately after, the track supervisor reviewed the video, Latifi was fined for this team’s violation in the starting area.

Latifi had to make a penalty after that, returning to the end of the race. The exact reason is that a Williams member repositioned the car after the indicator light on the track was only 1 red light.

After round 3, DRS was activated, and Verstappen attacked Leclerc’s position but didn’t really have a chance to get past the opponent. Although Red Bull really has a car that has a very good racing speed, it is still not easy to surpass Ferrari. Pérez gradually had difficulty with grip with 8-year-old tires.

Ricciardo showed aggression and wanted to give up his position, as he closely followed his teammates. McLaren does not allow 2 drivers to compete, only promotes Norris. Round 9, the yellow flag appeared, Sainz was discovered in the run off area at the 4th corner – the reason he had an engine failure. VSC was deployed and Sainz had to stop the race.

Among them, the only one who did not benefit was probably Hamilton when he was overtaken by Vettel in the pit. But not long after, Vettel locked the tire as he passed Ocon, and was out of the run off on the third corner. Round 15, Verstappen with DRS overcame Pérez, taking the lead in the race. Red Bull warned against competition – as an “instruction to Perez” for Verstappen to take the lead in the race.

Both Ferrari cars are DNF in this race

Round 17, Pérez entered the pit, falling behind Leclerc due to a technical error as the team lost 5.7 seconds to this stop. Verstappen after continuing for a few laps, then also changed into a new Hard tire.

Ferrari’s loss is not over, by round 20, the disaster continues to happen to Ferrari. The car smoked and Leclerc slowed, sticking to the curb back to the pit. Got the pole position, but both riders had to give up on the engine after the new race had done more than 1/3 of the laps. That will be a big change to the individual rankings, when two rival drivers Red Bull are leading the race, aiming for a 1-2 victory.

Round 24, Zhou’s turn, was also a car using a Ferrari engine that stopped. In 3 of the last 4 races, this rookie has not seen the finish line. The first top 3 riders have separate races. Next came Gasly, Ricciardo with Medium tires from the start, and Hamilton in 6th place.

Also, Norris has yet to change a tire, as have Ocon and Bottas. Maybe they’re aiming for Medium or Soft tires.

And on the track, there was still an engine problem, unfortunately also Ferrari, Magnussen stopped at the 15th corner. VSC was deployed. Both the Red Bull and Russell entered the pit, as did Ricciardo and Hamilton. 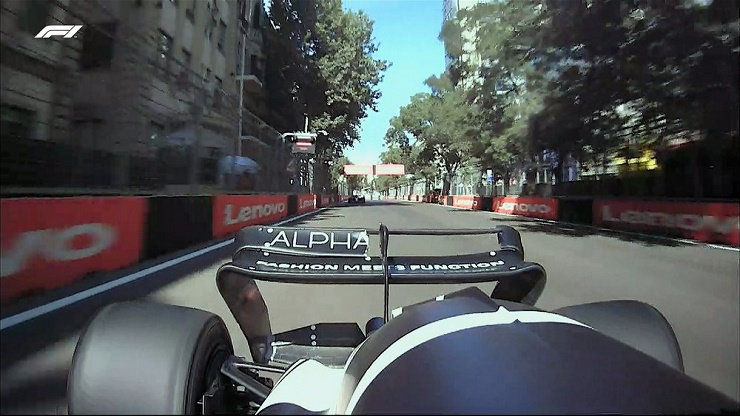 The incident caused the black/orange flag to be raised

Tsunoda, having been waved black and orange, returned to the pit to “fix” the rear wing. Round 44, Hamilton overcame Gasly when entering the 4th corner. Williams’ driver Latifi continued to be penalized for the second time in this race alone, with the error of ignoring the green flag.

Round 48, Stroll was brought to the pit and was the 5th driver to finish the race early. Verstappen marched to victory.

The McLaren duo looked for the last chance to overcome Alonso the distances and the remaining time was not enough. Their internal problems once again revealed themselves between the two racers. At this point, Norris seemed to be faster, wanting his teammates to give way, but McLaren ordered to stay in place.

Apart from Ferrari’s white-handedness, there wasn’t any surge at the top of the race. Victory 1-2 belongs to Red Bull with the maximum 44 points received – that is also the gap widened between these two racing teams.

25 points increased the gap between Verstappen and Leclerc as the Italian driver fell to 3rd in the individual standings. Russell finished 3rd, once again stepping onto the podium. Hamilton was voted Driver of the Day, finishing 4th.

Gasly secured 5th place ahead of Vettel and Alonso. Ricciardo finished ahead of Norris. And finally, Ocon in 10th place helped Alpine score both drivers.

There are still 14 races to go, time for Ferrari to catch up. But will they be able to solve the problem by the end of next week? Watch Formula 1 Grand Prix du Canada 2022 with the first running session taking place at 1:00 on June 18. (Sports news – F1 racing news) Charles Leclerc once again showed his class to win the 4th pole in a row. However, too much pressure from Red Bull continued to make Ferrari “fall…