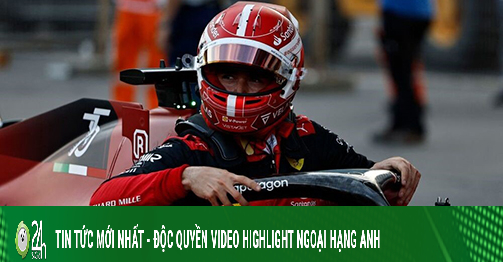 (Sports news – F1 racing news) Red Bull is getting ready for the qualifying session as Sergio Pérez leads the FP3 standings. But Charles Leclerc unexpectedly excelled for the first place at the Azerbaijan Grand Prix.

The session was adjourned for 15 minutes for fence repairs due to a crash earlier in F2’s early race.

The old developments repeated, Ferrari and Red Bull completely overwhelmed the other group, constantly taking turns recording the fastest sectors. Both teams used the time to prepare well for the next qualifying session.

The fastest time belonged to Pérez, who took first with a time of 1 minute 43.17 seconds. Leclerc finished the session with a time only 0.07 seconds behind the Mexican driver. Further away are Verstappen and Sainz, 0.279 seconds and 0.426 seconds ahead of Pérez, respectively.

McLaren showed good tempo, with Norris and Ricciardo in the top six, both about a second outside of the top. Gasly is 7th, ahead of Russell in 8th. Mercerdes looks to continue to have problems on the straights.

Vettel sits between the two Alpines at 9th and 11th, with a difference of just 0.004 seconds over the Ocon.

The delay also affects the starting time of the qualifying session. Verstappen led Q1 and was only 0.3 seconds apart in the top 4. But the red flag appeared when the clock was only 2 minutes and 30 seconds. Stroll locked the wheel and hit the barrier on the 2nd corner, and the Canadian driver had a similar situation before at the 7th corner.

The last group needs time to improve, but time is running out. The teams all entered “race mode” to get to the starting line before the clocks went back to zero. Bottas came out of the knockout zone with just 0.165 seconds ahead of Magnussen in 16th. Schumacher and both Williams failed to make it to the next round, while Albon claimed that Alonso had intentionally broken his lap. And finally Stroll in 19th place.

Like Stroll, Vettel also had a situation where he locked the wheel and crashed into the barrier at the 15th turn. The yellow flag appeared. The record of the remaining Aston Martin is good enough to stay in 7th place, entering Q3.

Vettel saved in time, firmly grasped the ticket in the top 10

Russell finished 8th, spent 1 lap to help Hamilton improve to 6th place. However, car number 44 will be investigated for moving slowly on the track.

Despite losing 1 lap due to Hamilton, Norris could not successfully exit the elimination zone with a difference of 0.022 seconds behind Tsunoda in 10th place. The Alfa Romeo duo were eliminated in 14th and 15th place. Ocon is in 13th place and Ricciardo is in 12th place.

In Q3, the top 4 continued to have heart-pounding situations when going through the bends without leaving any gaps with the barrier. In the final seconds, Leclerc was the fastest driver, taking the 2nd pole position in Baku with a time of 1 minute 41,359 seconds. Verstappen excelled across sector 3, up to 2nd place, before being pushed down seconds later by Pérez.

Sainz missed the chance to improve and will start 4th. Russell and Gasly will start 3rd in the top 6. And Hamilton in 7th will join Tsunoda, a good display from AlphaTauri. . Last in the top 10 are Vettel and Alonso.

Leclerc has not been able to convert last year’s position as well as the past three races into a victory. With 2 very fast Red Bulls chasing, is this victory possible? Watch the race officially start rolling at 6pm on 12/06.