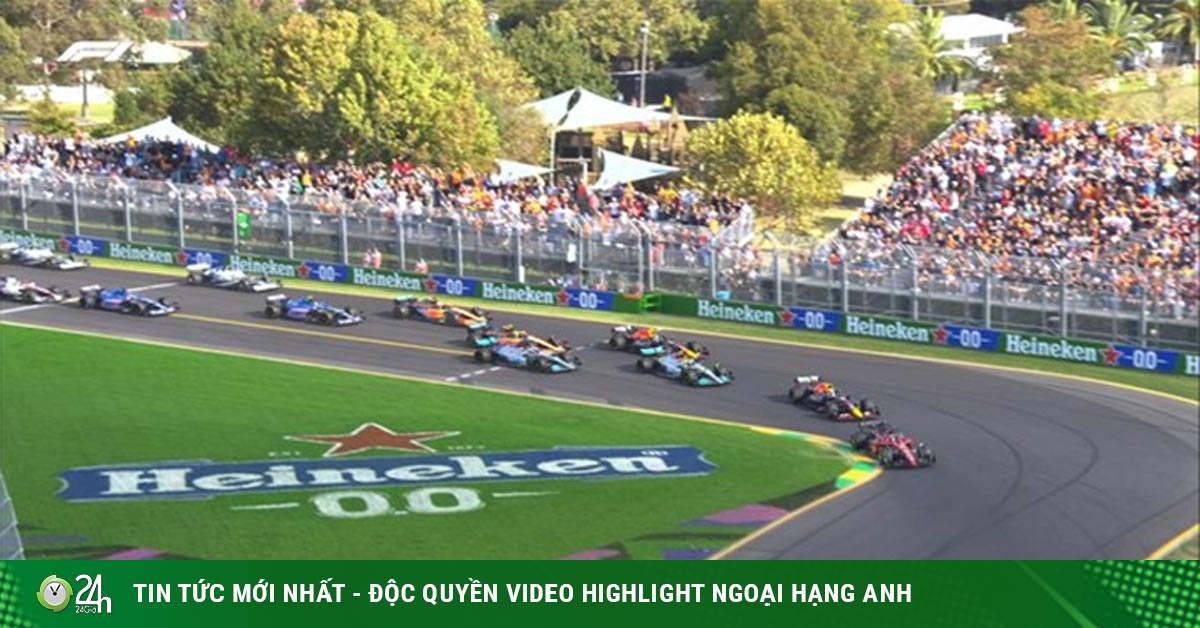 (Sports News, F1 Racing News) Charles Leclerc won an overwhelming victory at the Australian GP, ​​leaving Max Verstappen angry again after having to finish the race early for the second time in three races. Sergio Pérez and George Russell are also on the podium with the Ferrari driver.

Returning to Melbourne after 1100 days of waiting, all spices are ready for this exciting race at Albert Park. The crowd here was almost there cheering for their driver, Daniel Ricciardo.

Charles Leclerc had an impressive race

Aston Martin duo with Alonso, Magnussen, Albon and Sainz will start with Hard tyres. The remaining riders will all use Medium tires. Hard tires will take time to set the ideal temperature and with the outside temperature is also cooler.

Leclerc entered first place for the 10th time in his career, and the remaining drivers slowly returned to their positions, ready for the signal to start.

Leclerc had 1 start as usual and successfully exited into the first lane. Hamilton has found his way up to 3rd place behind Verstappen. But on the 2nd lap, Sainz lost control on the 9th turn, passed the top of the corner and entered the gravel. VSC was quickly deployed. Not long after that, the Safety Car also appeared.

The replay showed that Norris was left behind at the start. Meanwhile, Pérez had a good start, but trying to avoid crashing into teammates created an opportunity for Hamilton to pass. Stroll took the opportunity and changed to Medium tires. Safety Car will end at the end of the 6th round.

Leclerc set up a new fastest lap and also got out of Verstappen’s DRS range. However, Hamilton could not follow the game ahead when he was more than 4 seconds behind, and Pérez was and is and the danger is behind. Not long after, lap 10, Hamilton could no longer stop the Mexican driver and fell to 4th place.

Round 19, Verstappen entered the pit, but Ferrari has not made a decision yet. Hamilton is getting faster and faster and is back to follow Pérez. Norris and Pérez then entered the pit, reverting to Hard tyres. Next McLaren also brought in Ricciardo, and left the pit right before the match between Albon and 2 Aston Martins. 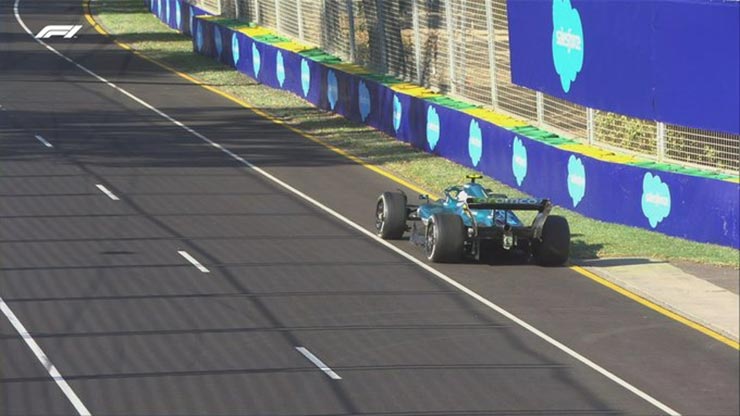 Vettel ends an unremarkable week with a DNF

Round 23, Leclerc and Hamilton entered the pit, changed to Hard tires. The Ferrari driver is still back in the lead, 4 seconds ahead of Verstappen. But then, Safety Car appeared on the track. Vettel lost control on the fourth turn, damaged the front spoiler, and came to a stop on the road with debris strewn about the rear.

Right before the Safety Car appeared, Pérez promptly overcame Hamilton, and Russell took advantage of the opportunity to enter the pit and returned to 3rd place. By the end of lap 26, the racing events continued to return. Leclerc, although a bit difficult with Hard tires, still maintained the leading position.

Round 30, Pérez rose to 4th place, chasing after Russell who had not yet reached the ideal tire temperature. At the back, 2 McLaren drivers in turn pushed Magnussen to the bottom. And Russell was told defending his position would hurt the tyres and Pérez eased through.

2nd DNF in the 2022 season of the defending champion

Round 38, Verstappen showed signs of chasing Leclerc after scoring the fastest lap. But disaster happened. The defending champion parked on the second bend and the RB18 appeared to smoke. VSC has been deployed. Magnussen and Alonso also took advantage of the opportunity, but that cost them a few places.

Leclerc is now 12.1 seconds ahead of Pérez, while the Mexican driver has been told that Max’s problem does not affect him. Behind, Bottas was forced out of the gravel by Stroll. The Canadian racer was fined 5 seconds after being caught bouncing off a straight track.

Stroll has gone to the pit, still has a penalty, and has been pushed out of the top 10 by Gasly and Bottas. Not a memorable week for Aston Martin. Round 52, Albon has been on Hard tires since the beginning of the race, currently in 7th place, while Latifi, after 2 pitting times, is currently in 17th place.

Leclerc wants to set a new fastest lap, but Ferrari thinks that no one can win it so it is unnecessary. Alonso slowed down quite a bit with the new Medium tires, and had to return to the pit.

Albon pitted into the penultimate round, with one lap left and back to 10th, but is threatened by Zhou after overtaking Stroll for 11th.

The road to victory is wide open for Leclerc to become the winner of the Australian GP 2022. Pérez and Russell join the podium title contenders. Hamilton finished fourth, followed by the McLaren duo with Norris leading. Ocon finished 7th, Bottas improved to 8th, Gasly 9th and Albon defended 10th place against Zhou. 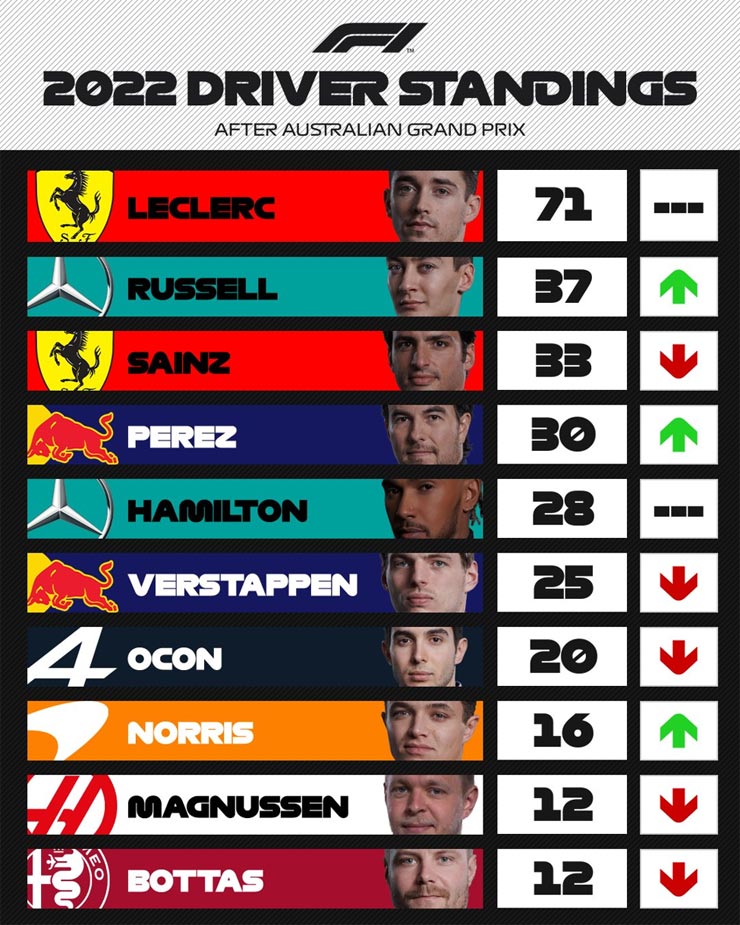 In the next race, the Sprint format will return with one more race on Saturday. Can Leclerc keep up the good work as F1 moves to Europe? Verstappen will want to solve this grudge and will pursue hard. Watch Formula 1 Rolex Gran Premio dell’Emilia Romagna 2022 starting April 22, 2022. 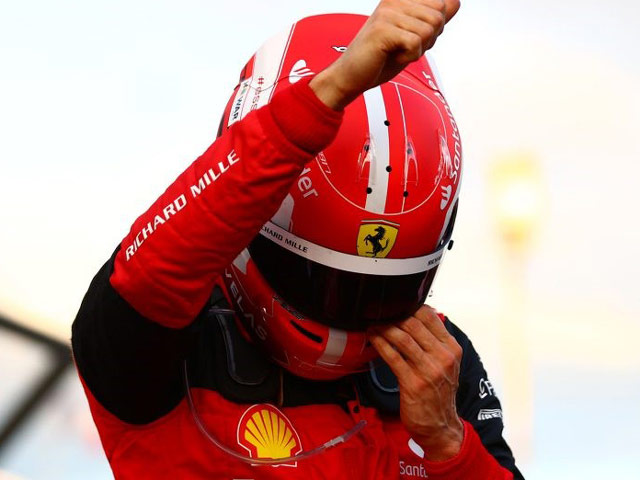