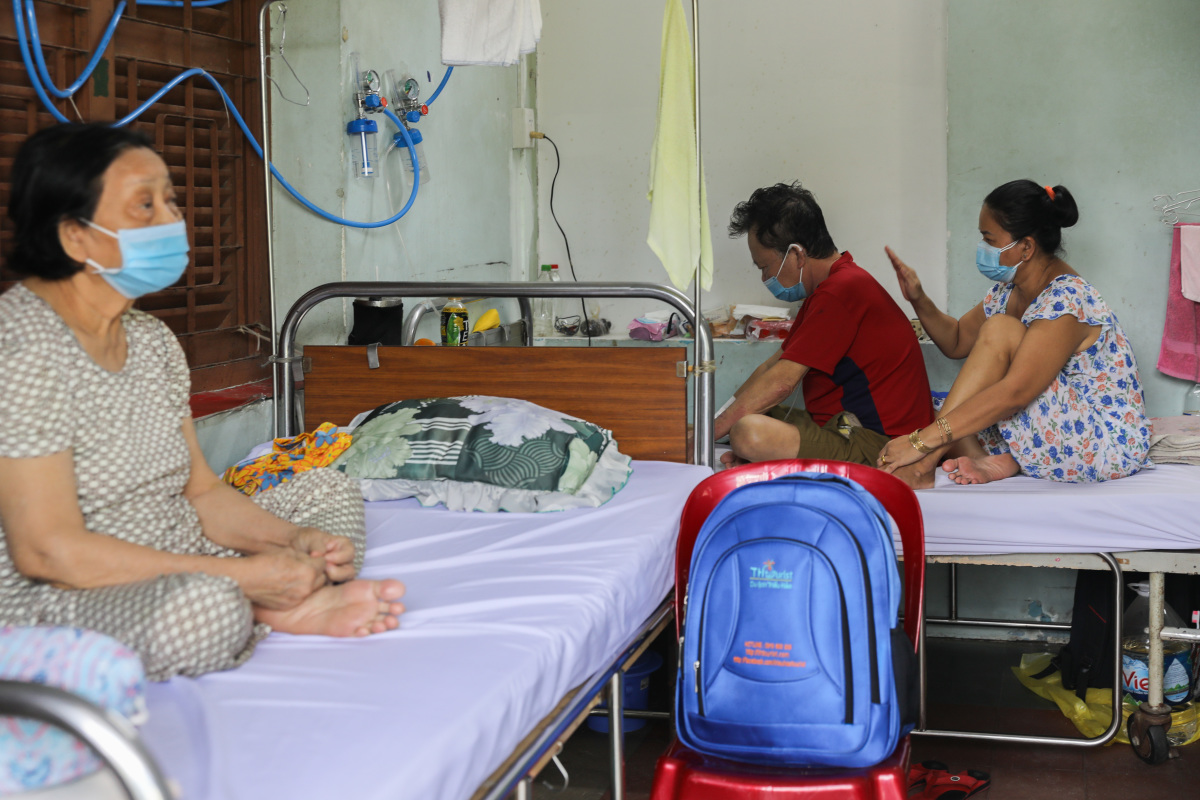 Ho Chi Minh CityMany Covid-19 patients who have recovered can easily find work to take care of F0 at home or in the hospital, with a salary of up to VND 850,000 per day.

In early October, Mr. Phan Hien’s family, in Tan Binh district, had four people infected with Covid-19, including his 85-year-old grandmother. Worried that in the coming days the young people might become heavy and unable to take care of her, Mr. Hien decided to hire someone.

His recruitment condition is “a healthy female friend, F0 has recovered from illness, can take care of the elderly”. “People who recover from the disease have better immunity anyway than people who get two doses of the vaccine,” explained Hien.

Just a few minutes after posting to find people in a group on Facebook, someone accepted the invitation to work at home. Hien’s grandmother is healthy and can walk, so he only asks the worker to support her when needed, not doing other things. The family also took care of eating, arranging a place to rest, so he decided to pay a salary of 500,000 VND a day. There was a girl who accepted but said that she could only work for a week.

Mr. Hien’s selection condition is currently a “prerequisite” for families wishing to find someone to take care of patients and the elderly at home or in hospitals.

Doctor, doctor Nguyen Van Vinh Chau, deputy director of the Ho Chi Minh City Department of Health, said that after recovering from the disease, F0 has the ability to protect itself against nCoV many times higher than a person who has not been ill (despite being vaccinated). enough two doses of vaccine). This means that a healthy person who has received two doses of the vaccine can still be infected, and a person who has been infected has a very low chance of re-infection.

During the fourth Covid-19 outbreak, Ho Chi Minh City had more than 410,000 infections. From August 1 to September 1, the number of F0s who have completed the isolation period is more than 87,000, including more than 54,000 people of working age.

In a group “Finding F0 from illness and taking care of F0” in Ho Chi Minh City, which was established at the end of August, there have been nearly 2,000 members so far. From October 1 to now, on average, there are about 5-7 posts per day searching for F0.

When families like Mr. Hien are in need, there is a chance for many F0s to recover from their illness. Ms. Le Bich Chi, 32 years old in Phu Nhuan district is an F0 who is making good use of this opportunity. From the end of July until now, she has taken care of 4 patients.

“In early July, I was infected, so I joined many groups of F0s to share their experiences of self-treatment of Covid-19. After recovering from the disease, I saw many people posting that they needed to find people who were cured to take care of their family members. they should try contacting,” said Chi.

As a worker, she has never worked to take care of patients. In the midst of being unemployed, having good health, and meeting the requirement “that F0 has recovered from the disease”, Ms. Chi decided to give it a try.

Joining a group “Finding F0 to take care of F0”, Ms. Chi will actively message people who post to find people. “A day’s wages range from 500,000 VND to 850,000 VND depending on whether the patient is heavy or light or whether or not they support their meals,” she revealed.

This is not a “high-paying light job” as many people think, Chi said. Due to being in the hospital, ordering food to be delivered is very expensive, not to mention often not being able to sleep because the patient can call at any time. Every time the doctor entered the ward, I had to leave to make room…

“Most of the people I take care of are elderly, have underlying diseases, so they stay in the hospital for a long time. Most of the relatives of the elderly are still in isolation, or are afraid of possible cross-infection, so they cannot go to the hospital. take care,” said Chi.

The F0 who have recovered from the disease are not only trusted for their ability to resist Covid but also because of the experience of “passing death” that they have experienced.

Binh An, 25 years old in Thu Duc city, was originally a sanitation worker in a field hospital. Two months ago, An was infected with Covid-19. After recovering from the disease, An joined the team of recovered F0s to take care of F0. “Having gone through the infected days, I know what Covid-19 patients need. In addition to supporting personal activities, I can also guide them to practice breathing, exercises to recover soon”, Binh An speak.

According to An, the need to find F0 to recover from the disease is so great that he often has to refuse invitations because he is “full of schedule”.

From the beginning of September, TP. Ho Chi Minh City also has a plan to mobilize and receive volunteers who are F0 people who have recovered from the disease, completed 14 days of home isolation in accordance with the regulations of the Ministry of Health to participate in the prevention and control of the Covid-19 epidemic. The participants are on a voluntary basis but still have an anti-epidemic allowance and living expenses.

“Because of my family’s economic burden, I did not participate in volunteer work, but chose to work as a wage earner to make ends meet. This is a legitimate job that helps many unemployed people like me during difficult times,” An said. speak.

With the goal of reducing the rate of Covid-19 patients who become seriously ill when treated at home, the Hope Foundation launched the “F0 medicine bag” program. Each donation of 380,000 VND corresponds to one medicine bag. Readers can see details here.