Before the return of the most anticipated football tournament UEFA EURO 2020™ after 5 years, K+ has “delighted” fans by fully broadcasting all friendly matches. Still on K+, football fans continue to burn with passion for the ball as they enjoy 51 dramatic matches from 24 of the most powerful teams, big stars from the Premier League and Champions Leagues of the season. prizes with many of the biggest attractive offers this summer.

This summer, all eyes are on the return of UEFA EURO 2020™

After four years of waiting and one year of delay due to the pandemic, fans are eagerly awaiting the opening of Europe’s most prestigious tournament UEFA EURO 2020™, which will be fully broadcast on K+ system from June 12. . Before that, the series of friendly matches before the tournament had somewhat warmed up the teams with gentle victories against under-represented opponents.

Assessing the possibility of championship between teams, The Analyst site said that the probability of France holding the throne was the highest with the rate of 20.5%. It is followed by Belgium, Spain, Germany, Portugal and Italy. In addition, a series of teams with a big surprise factor, bringing an exciting element to UEFA EURO 2020™ are the Netherlands, Denmark, England, Switzerland, Sweden and Croatia.

Expected confrontations between France and Germany… Commenting on the interesting points of this year’s EURO, BLV Ba Phu (K+) said: “Fans are waiting for the mighty teams from England, Germany, France, Spain, Belgium, Italy… with the expected quality players including Cristiano Ronaldo, Timo Werner, Memphis Depay, Ciro Immobile, Kylian Mbappe… In addition, some unprecedented differences in the history of this year’s tournament promise to bring a unique experience to viewers.”

As the copyright owner of a series of major football tournaments such as the English Premier League, Champions League, Europa League… K+ is always the first choice of football believers who are ready to live fully for a favorite sports season. and UEFA EURO 2020™ is no exception.

With K+, the audience will fully enjoy this most attractive European sporting event on VTV channels of the K+ TV system, including satellite digital TV and Internet TV (K+ TV Box and App. K+). Spectators who cannot watch the matches live late at night or early in the morning can follow the constantly updated highlights on K+ Television’s Facebook pages and Youtube channel. 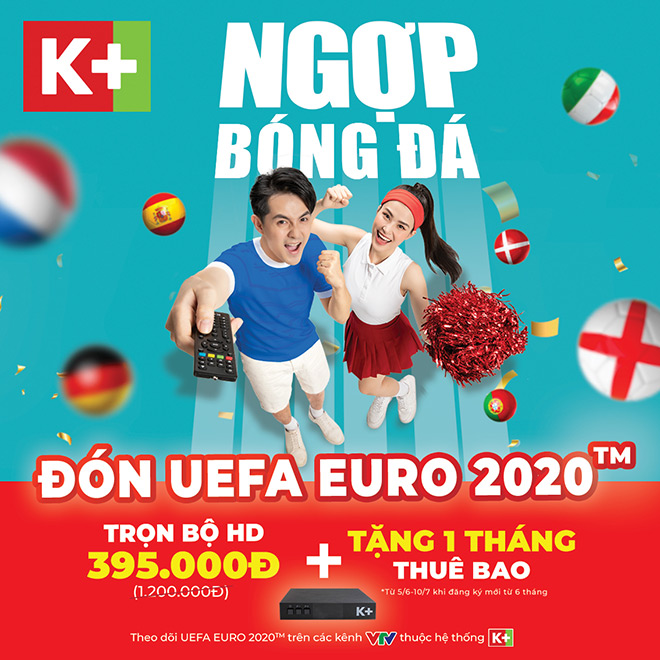 Filled with football, welcome the different UEFA EURO 2020™ on K+

And yet, fans will really be able to fully live UEFA EURO 2020™ with a series of professional and attractive companion programs exclusively produced by K+. BLV Dinh Huu Hai Thanh (K+) shared that European Summer Magazine brought the most unique information about the championship candidates, the brightest stars of this year’s tournament. Fans can get the most from expert judgment to behind-the-scenes information for UEFA EURO 2020™. “A series of short VOD content is produced and updated continuously during the EURO period. In addition, viewers can also follow the hottest information about the tournament on the Daily Newsroom Sports News,” he added.

More specifically, fans across the country can easily access all the above high-quality TV content from K+ with the most shocking offer of the summer from now until the end of July 10. K+ offers a great deal for fans with a new subscription program of 6 months or more, when buying a complete set of K+ HD satellite TV equipment or K+ TV Box, you will only have to pay VND 395,000 (normal price VND 1,200,000). /set K+ HD), get 1 extra month of subscription and free App K+ account to watch anytime, anywhere.

In parallel with the dramatic matches from the big EURO players, the Vietnamese audience also had the opportunity to cheer for the home team in the 2022 World Cup qualifiers in Asia. A spectacular 4-0 victory in the last 7/6 match against Indonesia has brought the Vietnamese team to the top of Group G, which is considered by domestic and international media as the strongest team in Southeast Asia.

To boost the spirit of the red shirt warriors, fans can continue to watch the remaining two matches taking place tomorrow (June 11) against Malaysia and June 15 with the UAE on K+PM channel. under the digital satellite television (DTH) platform of K+ Television. Which names will shine after the great performance of Cong Phuong, Van Thanh, Tien Linh, Quang Hai? Buy and book K+ now to experience the “soccer-filled” summer. 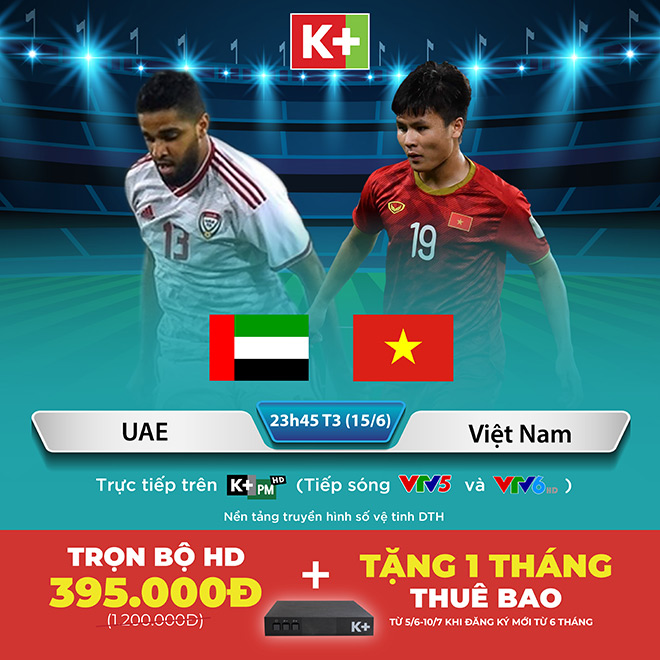