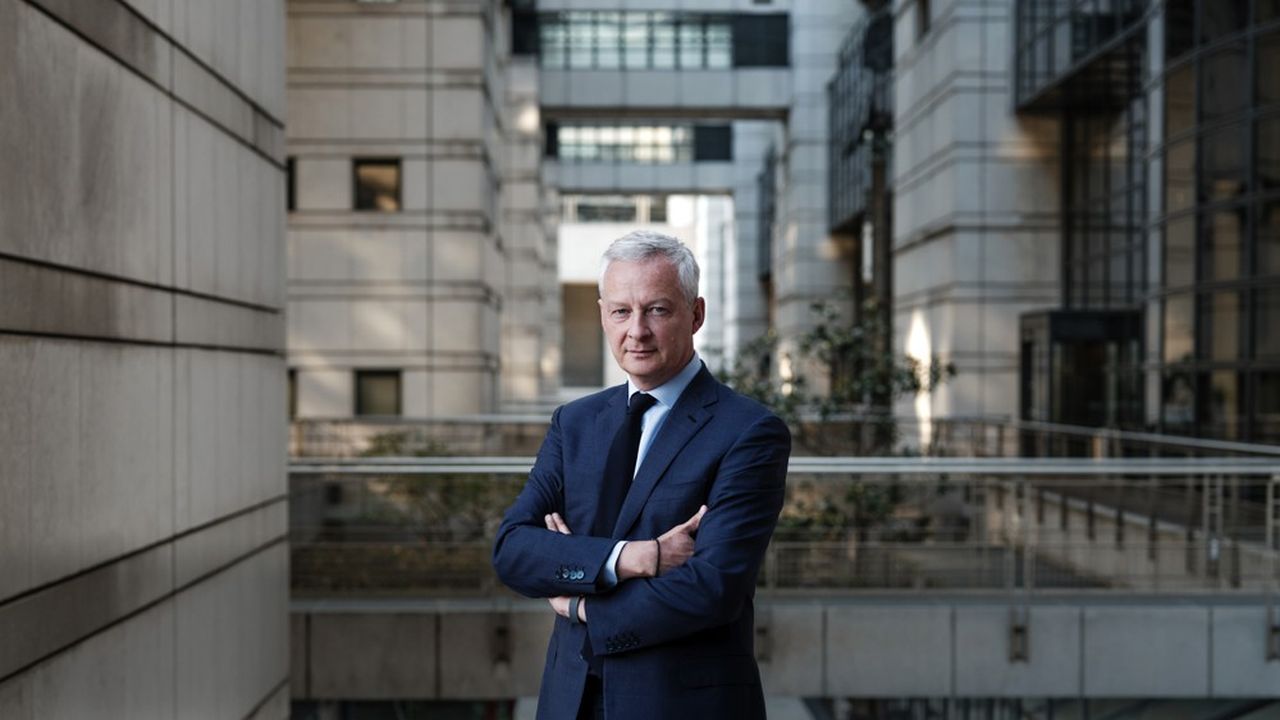 How do you see the economic situation developing over the next few months?

However, I am lucid about the difficulties facing us. The first is obviously the energy crisis. The second concerns the economic situation of our main partners. The United States has just recorded two negative quarters. Chinese growth is suffering because of its real estate market. As for Germany, it is more exposed than ever. We are not an island. All this creates a particularly unstable environment for the months to come.

In this context, are you maintaining your objective of 1.4% growth in 2023? Do you rule out the risk of recession in France?

We will assess the growth for 2023 at the time of the PLF, taking into account the risks related to the energy market. Let’s be clear: if tomorrow Russia were to completely cut off its gas exports to Europe, this would result in a shock of at least 0.5 points on French growth.

In August, inflation in France slowed to 5.8% over one year. Has the peak passed?

No. A monthly figure does not reflect the dynamics of inflation, which continues to weigh heavily on our compatriots. We do not anticipate a structural decline in inflation before 2023. Our whole policy is to smooth its effects over time.

From this morning, the discount of 30 cents per liter of fuel, which is added to the rebate of 20 cents granted by TotalEnergies, will relieve the wallets of the French. This is also the case for the revaluations and the exceptional back-to-school aid voted this summer.

What would happen without any tariff shield on energy at the start of 2023?

Without the price shield, the increase in gas and electricity prices would be at least 100% next year! That is an increase of 120 euros on average per month and per household. It would be unbearable. We will not let it happen. There will be an increase in energy prices in early 2023, but it will be contained and reasonable compared to this worst-case scenario.

What will be the order of magnitude, should we fear a 40% increase as in Germany?

Doesn’t the return of inflation, particularly in energy, sound the death knell for your reindustrialization objectives in France?

Are you going to take any further action?

Yes of course ! In the coming weeks, I will make proposals to the President of the Republic and to the Prime Minister to reduce the time required to set up factories in France. They are seventeen months with us against eight months in Germany. We must tackle all the obstacles that unnecessarily slow down procedures.

These measures will complement all the policy already in place for several years: to produce more carbon-free electricity in France, to defend the return of an industrial culture, to develop training, and to continue the reduction of taxes which penalize industry. The CVAE will be definitively abolished in the 2023 finance bill, i.e. a tax reduction of 8 billion euros.

How will this be compensated to local communities? Should we keep an incentive mechanism for setting up factories?

We have started discussions with local elected officials to see how to compensate for the end of the CVAE with a dynamic recipe. We want to maintain an incentive for local authorities to attract new industrial activities.

I remind you that in two years, our majority will have lowered production taxes by 18 billion! Who did better?

This is proof of our determination to reindustrialize our country. But there are also budgetary realities. We cannot be asked at the same time to restore the public accounts and to lower taxes ever further.

Are business leaders playing the game of relocation?

The state of mind is changing: so much the better. Strong decisions have been taken, such as that of Renault to locate its production of electric vehicles in France, or the installation by GlobalFoundries and STMicroelectronics of a semiconductor factory in Crolles. We must continue to move in this direction.

Should compensation be requested from companies that make exceptional profits?

We need profitable companies to invest and hire. But it is obvious that they must also participate in the collective effort, especially if they benefit from exceptional situations. At the end of the year, we will take stock of the efforts made.

How to involve them more?

First, by reducing the bill for our compatriots, as was done with the fuel discount from Total Energies. Banks must make similar commitments on bank charges, as insurers on auto and home insurance premiums. In addition, I repeat that all the companies which can it must increase the wages, to pay tax-free premiums or to resort to the profit-sharing and the participation.

Why not ? The track is interesting. It conforms to the philosophy of our majority, which will always prefer commitment and participation to coercion and taxation.

Transition and climate planning are priorities. How will this translate concretely for Bercy?

This will be reflected in all of our decisions. The budget, investments, aid to businesses must obey the need to accelerate the ecological transition. This culture change was made during the recovery plan, it must be multiplied. It is no longer just about producing, it is about producing more and better to combine growth and climate.

Are you going to make aid or tax cuts conditional on companies’ ecological commitments?

Above all, we want to create a favorable framework for the ecological transformation of companies. Conditionality too often rhymes with complexity.

You promised that the income tax scale would be indexed to inflation. What level will be selected?

The revaluation will be based on the level of inflation in 2022, around 5%. The French will not pay more taxes because of inflation.

Will you further revise tax revenues upwards this year, and how do you see the trajectory for 2023?

For 2023, it is too early to answer. What I see is that when we lower taxes, we raise revenue. When we reduced corporation tax (IS) from 33% to 25%, we collected an additional 13 billion euros in IS. This enabled us to finance the package of measures for purchasing power. With 10 billion euros in VAT and 3.5 billion in income tax, an additional 27 billion euros will be returned to the coffers this year.

What should we expect in terms of indexation of social benefits in 2023?

With regard to savings, the deputy Daniel Labaronne in charge of a task force on the reduction of public expenditure, evokes the track of a reduction in aid to companies and in particular a revision of the research tax credit…

The parliamentarians are free to make their proposals. If we start to close the door on this or that economy, it’s a safe bet that we will not reduce public spending.

Furthermore, I renew my invitation to LR parliamentarians, socialists and environmentalists to participate in this work. Being in the opposition in no way precludes participating in a reflection of general interest on the reduction of public spending.

LFI and the RN cannot reflect with you on public spending?

I mentioned the groups to which we open the door of this commission.

But when it comes to the CIR, you have long been opposed to any change…

The CIR is an essential factor of attractiveness for our country and must remain so. So much the better if it can contribute even more to our two strategic objectives: employment in France and greening.

Is the deficit target of 3% of GDP in 2027 still realistic in such an uncertain economic context?

Yes of course. The President of the Republic has set this ambitious objective, we will keep it. The heart of our strategy is the development of activity in France, which should bring us growth and full employment in 2027.

The second pillar is structural reforms. The most urgent for business leaders who are struggling to find labor is that of unemployment insurance. It will be driven soon. The second essential reform is the pension reform. It must come into force in July 2023. To have more prosperity in France, we must collectively work more. The current situation does not alter this truth.

Can we avoid 49.3 for the adoption of this budget?

We want it. But it does not depend on us, it depends on the oppositions. If the Republicans have a constructive attitude like they have had on the last four pieces of legislation, we won’t need 49.3. If, on the other hand, the Republicans confirm their radical opposition line and their refusal to vote for the budget, the situation will be different. As far as we are concerned with the Prime Minister, we will seek compromise, dialogue, discussion at all costs.

Could moving forward on the subject of inheritance and donations promote a compromise with LR?

The entire project of the President of the Republic will be implemented during the five-year term. On inheritances and donations, we will implement it as soon as possible and appropriate. We will decide this moment with the parliamentarians.

The reform of European budgetary rules has been bogged down since 2019. Does Germany’s wait-and-see attitude annoy you?

Why do you want me to get annoyed? We are in regular contact with my counterpart Christian Lindner. The German government has already recognized that we could have differentiated deleveraging schedules. Chancellor Olaf Scholz also announced the need to invest heavily in security and ecology. These are positive developments. You know my conviction: a Franco-German compromise is always a solid basis for a European compromise.

After Hungary’s veto, do you still hope for a European agreement this year on minimum taxation of multinationals?

More than ever. We could reach an agreement in the coming weeks. I am against exceptional taxation, but I am resolutely in favor of tax justice. Multinationals should no longer be able to resort to tax optimization.

It all depends on Hungary. Either she lifts her veto, or we will find an agreement with as many European countries as possible to implement minimum taxation from 2023.