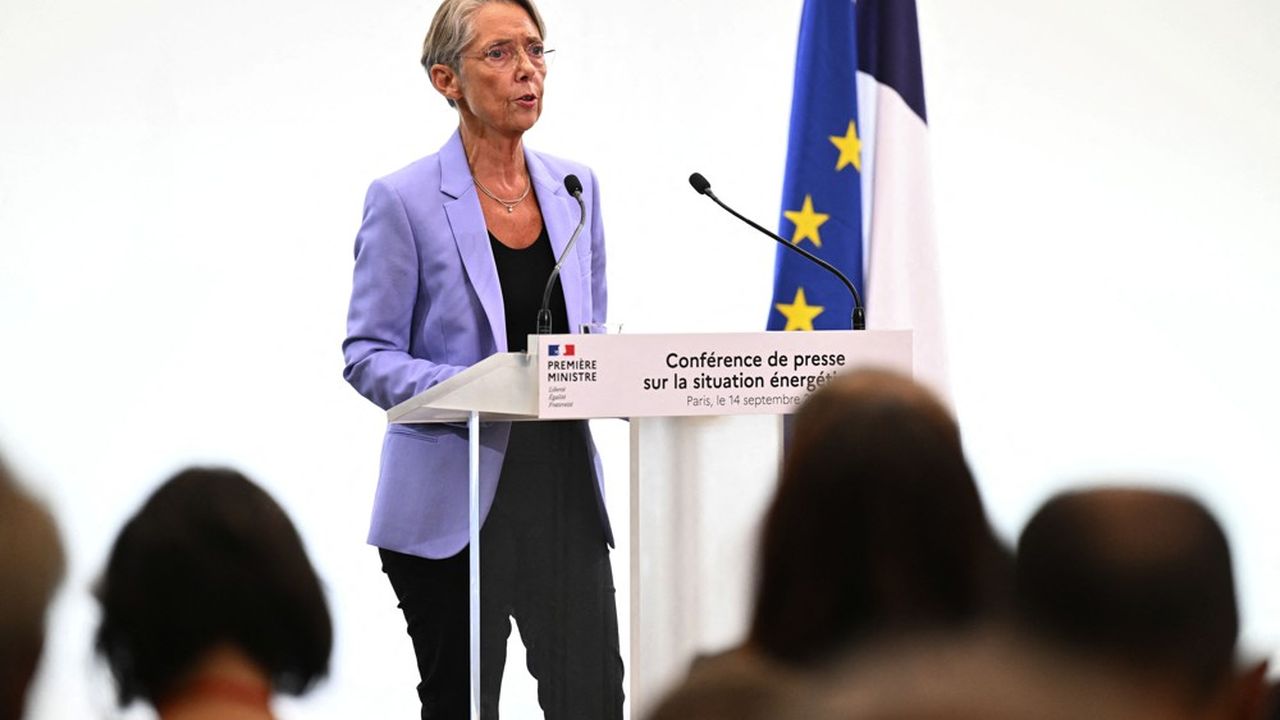 Continuing to protect the French while moving, in the words of the Minister of Public Accounts, Gabriel Attal, from “whatever it costs to how much it costs”, and this, without causing a social explosion: such is the difficult equation that the government is trying to solve this fall. The subject is crucial and it is the Prime Minister, Elisabeth Borne, who insisted on stepping up to the plate this Wednesday during a press conference to give the – long-awaited – follow-up to the tariff shield.

This is maintained but will be less generous, with a price increase limited to 15% for gas from January 2023 and 15% also for electricity from February 2023. And as a bonus, an energy check increased for the most modest (200 euros for the first two deciles) and extended (to 100 euros) to households in the next two deciles.

“The sobriety chosen rather than the cuts suffered”

To have these increases accepted, the head of government showed herself to be aware of “the concern of the French, communities, businesses” and endeavored to show that the government had, in response, “taken measures very early on. strong measures to protect the French”.

The Prime Minister also wanted to be rather reassuring, if “chosen sobriety rather than the cuts suffered” and “European solidarity” are indeed there to get through the winter without too many hitches.

Efforts shared by all

And Elisabeth Borne to quote, in this order, the efforts of the State, communities, companies and citizens but to insist, as has also done on several occasions the Minister for Energy Transition, Agnès Pannier-Runacher : “Obviously, it is not the French in fuel poverty who have to pay. »

The latter also underlined, with regard to sobriety, that it is up to the State, first of all, to the communities, to the major players to set an example. “The French are ready to make an effort if everyone does, if the constraints and the efforts are shared by all and useful. Otherwise, believes an elected official of the majority, there is a risk of setting fire to barrels well installed on the road of the rulers. »

Also, Elisabeth Borne pointed out that the limited increase in gas and electricity prices at the start of 2023 will represent per month and per household 25 euros for gas instead of 200 euros and 20 euros instead of 180 euros for electricity. “This is the reality of what many households are experiencing in Great Britain, Italy, Germany,” she insisted, when the government keeps reminding us that the French have been the best protected.

Not sure that this consoles the French who will nevertheless find it difficult to pay more in 2023. “The comparison with Great Britain, it is starting to infuse, nevertheless reveals a figure of the majority. On the other hand, no one is aware of the fact that the tariff shield is now our third expense behind education. »

“Do not dig deeper into our debt and target aid more”, it is also, insisted Elisabeth Borne, what the government is tending towards. Even if he abandoned all targeting with the rebate on fuels.

The Minister of the Economy, Bruno Le Maire, defended himself from pursuing the “whatever the cost”. “There is no comparison with what we have done for the Covid”, he justified while leaving the door open to possible new aid, for example on fuel, if necessary in 2023 “Sobriety and even more so the transition, we will never succeed if it is not fair and without support, justifies a minister. You have to find a balance. »