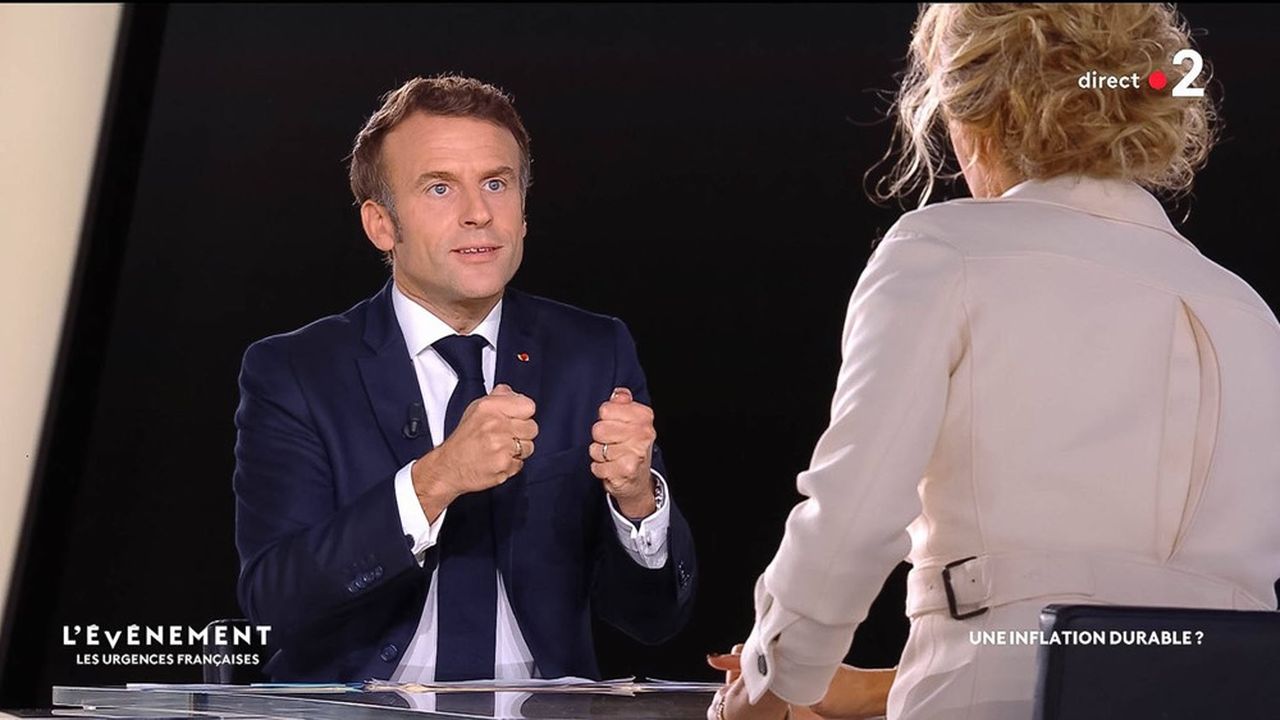 Emmanuel Macron was eagerly awaited. Two weeks after discussing the many international issues, he returned to France 2 this Wednesday evening to talk about subjects that affect the French more directly.

Between the crisis of purchasing power, that of energy prices, the situation in hospitals, security, and also pensions or the ecological transition, the issues are as numerous as they are burning. Six months after his re-election, it was time for the big explanation for the president. “We have to weather this storm,” he said at the start of the show.

Two topics dominated his interview: inflation and pensions. The rebate on fuel, which is to stop at the end of the year, will be replaced by a mechanism for large rollers, confirmed the president. Support systems for students will be strengthened, he promised.

Small businesses will also be helped, with an increase in the price of electricity and gas limited to 15% as for households. For SMEs, a mechanism will be put in place to cushion the increases. It will be presented this Friday by the government. “The system will guarantee a reasonable price,” promised Emmanuel Macron. Finally, for larger companies, an aid system will be put in place.

He also fixed his red lines. “If we want to recreate employment, the solution is not to reindex wages to inflation,” he recalled, stressing that it was François Mitterrand who had put an end to this indexation at the start. of the 1980s. Instead of a return to indexation, he took up the policy of another of his predecessors, Nicolas Sarkozy, of “working more to earn more” via tax-free and desocialized bonuses.

“It is not the state that decides on salary increases,” recalled Emmanuel Macron, asking companies to share the value. “Dialogue in a company on the sharing of value is legitimate and necessary”, he underlined. He put back on the front the employee dividend, campaign promise. The sharing of the value will be the subject of an agreement within the framework of the National Council for Refoundation.

“We have no choice but to work more”

As he had done a fortnight ago, Emmanuel Macron took on professor’s clothes, graphics at the key, to discuss public deficits. “We have to save money,” he said, excluding new taxes.

The pension reform has come to invite itself as evidence. “If we want to succeed, if we want to move forward, we have no choice but to work more,” he said, recalling that French employees work less than Europeans. He again showed his determination to carry out this reform. “The pension reform is essential if we want to preserve our social model, even though we can no longer increase our taxes,” added the head of state.

Emmanuel Macron has become a teacher on the pension reform, the outlines of which will be known at the end of the year following the consultations currently being carried out with the social partners. “The mandate I had is to say that from the summer of 2023, we will have to shift the legal age by 4 months per year”, he confirmed. This means a legal age raised to 65 years in 2031. He declared himself open to modulate the parameters of the pension reform, such as for example lowering the legal age to 64 years while extending the number of quarters of contributions.

An upstream agreement in Parliament

On the political level, he wanted “agreements” with political formations – The Republicans in the first place – to find an agreement upstream in Parliament on the pension reform. Incidentally, Emmanuel Macron denounced the “baroque coalition” of Nupes. “Today there is no alternative majority, because it would be based on inconsistency and extremes,” he denounced, after the RN deputies voted for the motion of censure of the Nupes, an initiative he called “cynical”.