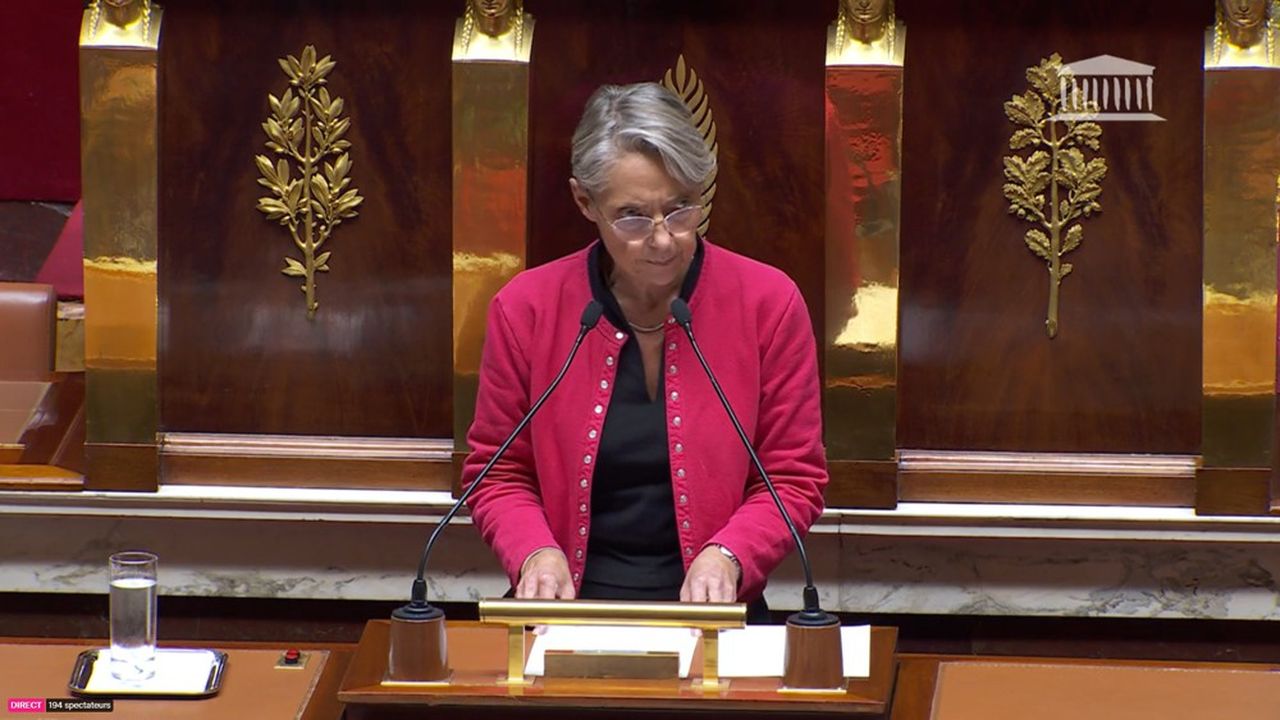 The serenity will not last. Discussed calmly in committee, the Social Security budget (PLFSS) for 2023 was the subject of tense debates in public session on Thursday. Put in difficulty by the opposition from the examination of the first articles, the Prime Minister, Elisabeth Borne, engaged her responsibility by engaging the 49.3.

“We cannot take the risk of a distorted project”, launched the head of government just before 8 p.m., welcoming the discussions in committee but deploring those which took place in session. The head of government, however, indicated that there would be a debate on the fourth part of the PLFSS relating in particular to health expenditure for 2023.

In the meantime, the amendments added or taken up on the third part (revenues), will slightly increase the Social Security deficit to 7.2 billion euros in 2023 instead of 6.8 billion in the initial text. “The aim is in particular to draw the consequences of the modification of the chronicle of the increase in excise duties on tobacco, the revaluation of the floor rate for home help services as well as the extension of the exemption TO-DE [travailleurs saisonniers agricoles, NDLR] “, says the government.

The latter expected, as after the use of 49.3 for the first part of the finance bill, to see the opposition table new motions of censure which could then probably also be discussed on Monday. La Nupes, through the voice of the president of the LFI group Mathilde Panot, announced that it was filing a new one against the government on the PLFSS.

The tone rose in the hemicycle from the examination of the first articles. The deputies notably rejected the article summarizing the Social Security accounts in 2021. “We cannot change what happened”, retorted the Minister of the Budget, Gabriel Attal. “I don’t understand this posture you have of wanting to block everything,” he said, preparing the ground for a quick takeover by the executive.

The mood turned electric when Article 4 was defeated. The majority and the opposition blamed each other for the rejection of this article correcting the amounts of expenditure allocated to health in 2022. “You are scuttling your own text”, stormed the socialist deputy Jérôme Guedj when the government reproached the opposition to actually reduce the means granted to city medicine. “You are trying to create tumultuous sequences to provoke a 49.3”, even replied Antoine Léaument (LFI) against Gabriel Attal.

The government wants to listen

At the start of the session, the government nevertheless wanted to listen to parliamentarians. “Many of you are making proposals in terms of health and the PLFSS will be intended to be enriched by these”, declared the Minister of Health and Prevention, François Braun, praising the quality of the debates in committee.

The members of the government then succeeded each other at the microphone to promise to support the proposals made by the deputies in committee. The executive has for example promised to specify the content of future prevention consultations or to ensure the supervision of students carrying out the future fourth year of specialization in general medicine, as desired by deputies.

The government has also promised to resume provisions promoted by parliamentarians to facilitate the accumulation of employment and retirement of doctors, at a time of medical deserts. He also welcomed the wish of the deputies to extend the interim management measures to the medico-social sector or to increase the sanctions against nursing homes which do not respect the necessary rules.

The Budget Minister also announced a new postponement, to 2024, of the transfer of the collection of Agirc-Arrco supplementary pension contributions to Urssaf, a project decried by the social partners and which the deputies had proposed to cancel in committee. Faced with right-wing deputies calling for strengthening the fight against fraud, the minister also defended the executive’s amendments on this subject.

Not enough to appease the oppositions which rose to the crenel from the general discussion. On the merits, they took turns to denounce an insufficiency of the means put on the table to support the hospital, the absence of convincing measures to fight against medical deserts or the lack of ambition of the executive to respond to the challenges posed by an aging population.

On the form, several parliamentarians warned the government against the temptation to quickly resort to article 49.3. “Do not force hastily, give us time to examine and discuss the PLFSS”, launched at the start of the debate the deputy Thibault Bazin (LR).

The socialist deputy, Jérôme Guedj, however, filed a motion of rejection to force the government to “review its copy”. “You deplore the absence of debate […] and you are tabling a motion to reject which, if adopted, would precisely prevent us from debating”, François Braun was pleased to point out.