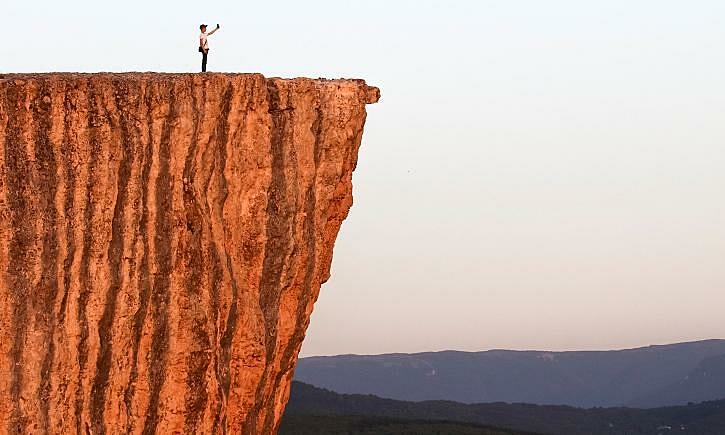 Every year, the world records thousands of accidents and dozens of tragic deaths of young people just because they want to have a unique selfie to share on social networks.

The most recent example is the case of a 23-year-old American man and two relatives walking to Vesuvius – a 1,280 m high volcano in the Campania region of Italy, on July 9. The guest is said to have dropped his phone while taking a photo and slipped and fell into the crater. There was no loss of life, but the victim was badly scratched.

In January, Richard Jacobson, 21, took a night hike in the Superstition Mountains in Arizona (USA), with the destination of a craggy cliff to take a selfie with the space below being the lights of the whole city of Phoenix. But this person slipped and fell into the abyss about 214 m deep. A hiker found Jacobson’s body near Flatiron Peak in Lost Dutchman State Park, January 24.

Research by Indian scientists shows that, from October 2011 to November 2017, there were 259 deaths when trying to take a selfie, the victims having an average age of 23 years old.

About 72.5% of fatal victims occurred in men and 27.5% in women. The highest number of selfie deaths were recorded in India, followed by Russia, the US and Pakistan.

Selfie was named the 2013 word of the year by the Oxford dictionary, described as a photo taken of oneself (or a group), often using a smartphone for the purpose of sharing on social networks.

Google estimates 24 billion selfies were uploaded to Google Photos in 2015. About one million selfies are posted every day among the 18 to 24 year old demographic. The US Pew Research Center has found that about 55% of millennials have posted selfies on social media services.

But why do so many people risk their lives to get the perfect photo?

Dr. Pamela Rutledge at Fielding Graduate University in Santa Barbara, California (USA), director of the Center for Research in Media Psychology feels there are many dangers to the “selfie culture”.

Rutledge said the majority of people who responded to this culture were young people, and technology also fueled the “selfie” phenomenon to thrive. Not to mention, many websites share information on “how to take a perfect selfie” or “different selfie positions”. In addition, selfie contest events in schools, companies or communities with prizes, also make many people dare to take risks.

In addition, taking selfies also aims to impress people in the media. Natalie Bloom, 23, of suburban Boston, noticed that many people were interested in impressing friends via social media with the best photos. “So they did reckless things, not thinking about how dangerous they were,” the young woman said.

Amanda Buczynski, 23, of Boston, agrees, saying that society’s obsession with social media causes people to do crazy things to get a good photo. “Social media makes people trust the validation of others through the number of likes and comments,” says Amanda.

Psychologist Dr Tracy Alloway says the neurotransmitter dopamine causes the average person to take risks. Especially when seeing likes or positive comments under a post, a large amount of dopamine creates a feeling of euphoria and encourages the person to do that behavior again.