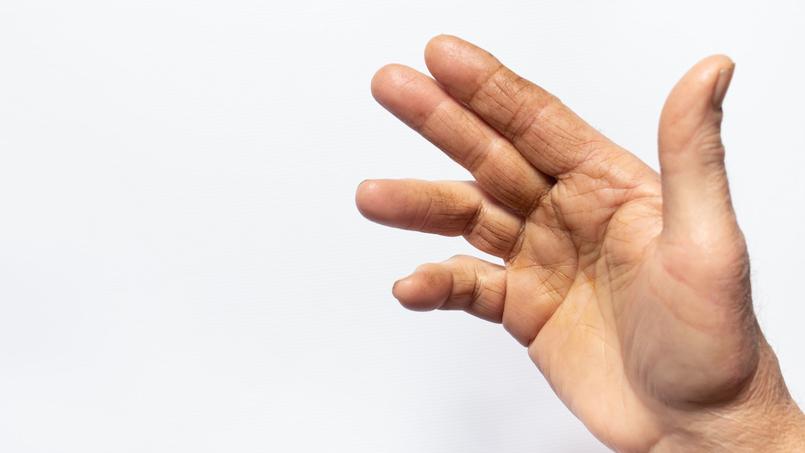 Characterized by a progressive retraction of the fingers of the hand, this pathology of genetic origin is benign and very frequent. Its management depends on the severity of the impairment

Where does Dupuytren’s disease come from?

Although first described in 1831 by the French surgeon Guillaume Dupuytren, the disease that bears his name was bequeathed to us by the Vikings. Even today, the prevalence of this hand pathology remains higher in northern Europe. “There are almost no cases on the African continent”, indicates Dr. Charles Schlur, orthopedic surgeon at the French Institute of Hand Surgery, in Paris.

Dupuytren’s disease is defined by fibrosis of the superficial palmar fascia. “The palmar aponeurosis is a very fine membrane which is located between the skin of the palm and the deepest elements which are the tendons, the arteries and the nerves”, explains Dr. Schlur. Normally, this layer is thin like cigarette paper. “With the disease, the aponeurosis thickens to reach several millimeters and, as a result, loses elasticity, continues the specialist. It will stretch less and may even have a tendency to retract, limiting the extension of the fingers. ” This abnormal thickening, called fibrosis, is explained by the proliferation of myofibroblasts, cells involved in the production of collagen.

READ ALSO » Hand pain: all you need to know

How is the diagnosis made?

This pathology is quite frequent: it affects between 5 and 10% of the general population, with however more or less marked forms. The signs appear between the ages of 40 and 60. Very often, when the patient delves into his family history, he discovers an ancestor who also suffered from it. Many factors such as alcohol, tobacco, occupational strain injuries, diabetes or even epilepsy are often considered to be associated with Dupuytren’s disease. But Dr Schlur is adamant: “The origin is systematically hereditary”.

It is however impossible to implement any form of prevention. Indeed, no physiotherapy, splint, ointment or massage can prevent the progression of the pathology.

In half of the cases, Dupuytren’s disease affects both hands, but if this pathology is bilateral, it is not symmetrical. As for the diagnosis, “In most cases, a clinical examination is sufficient”, says Dr. Schlur. Ultrasound, sometimes prescribed, is unnecessary.

What are the symptoms of Dupuytren’s disease?

Dupuytren’s disease is characterized by symptoms related to the retraction of the integuments, that is, of the tissues. It progresses in spurts and can therefore, depending on its course, remain unsuspected for a few years, especially since it is generally painless, which makes it possible to distinguish it from joint diseases of the inflammatory type, such as osteoarthritis or arthritis. “In 75% of cases, the attack begins at the level of the 4 and 5 fingers, that is to say the little finger and the ring finger, describes the surgeon. There is the appearance, at the base of the finger or fingers, of one or more small balls, called nodules, or sometimes of a longitudinal cord, or bridle, in the palm of the hand. “

This subcutaneous induration will, over time, cause a irreducible flexion of the first two phalanges of the affected fingers – never the third – which end up getting stuck. This permanent flexion, evaluated in degrees, continues to increase as the disease worsens. “In severe forms, the fingers are reminiscent of claws”, says Dr Schlur. Putting your hand in your pocket, putting on a glove or even giving a handshake can all become extremely difficult to accomplish.

What are the types of surgery?

Treatment should be considered when retraction prevents full extension of the fingers. A simple test makes it possible to decide: “As long as you manage to put your hand flat on a table, no support is justified, develops the surgeon. On the other hand, if the test is positive, a surgical intervention must be proposed, within a reasonable timeframe so as not to compromise the chances of recovering full extension. ” Over time, in fact, the tissues harden. Two options are possible, depending on whether or not one chooses to eradicate the disease. And it is of course to be discussed with the patient, according to his profile, his age, his physiology.

The first solution involves a percutaneous needle fasciotomy (ABA). This technique consists of cutting the flanges, responsible for the flexion of the fingers, using a very fine needle. It is a gesture that can be performed under local anesthesia, and repeated several times over time. “The fasciotomy does not treat the disease, the fascia is always hard and thick. Hence a high recidivism rate of 90%, within a fairly short timeframe ”, observes Dr Schlur.

The alternative isaponeurectomy, which aims to remove the disease. This approach involves opening the palm of the hand and finger (s) to remove diseased tissue. It is performed on an outpatient basis, under loco-regional anesthesia. Sometimes it is necessary to do a skin graft, because the finger has retracted so much that once extended, there is a skin deficit. With the fascia, the recurrence rate is about 10%. If the operation is accompanied by a transplant, it drops to zero.

This surgery is delicate. Complications, such as damage to nerves or tendons, can occur during the operation. In 3% of cases, it can lead to algodystrophy, in other words a chronic pain syndrome in the area of ​​the hand. And the surgery is just one step.

The re-education with a physiotherapist is fundamental to hope to regain good hand mobility. The fitting of a custom-made dynamic finger extension splint (orthosis) may also be recommended during the early stages to maintain the maximum extension obtained through surgery. “The healing time is 2 to 3 weeks, between treatments and dressings, and the recovery time varies between 2 and 3 months”, assures Dr. Schlur. Data which explains that the aponeurectomy affects less than 5% of people with Dupuytren’s disease.

What are the characteristic signs of Dupuytren’s disease?

A subcutaneous nodule appears at the base of the affected finger (s), with the onset of flexion, barely or even not marked. Reference: at zero degrees, the finger is fully extended.

The nodule increases in size: a band or cord gradually forms on the palmar surface.

Only the first and third phalanges of the fingers are affected. The fingers tend to close.

At 180 °, the finger (s) can no longer extend: the palmar band which has formed and thickened keeps the fingers retracted in the palm.