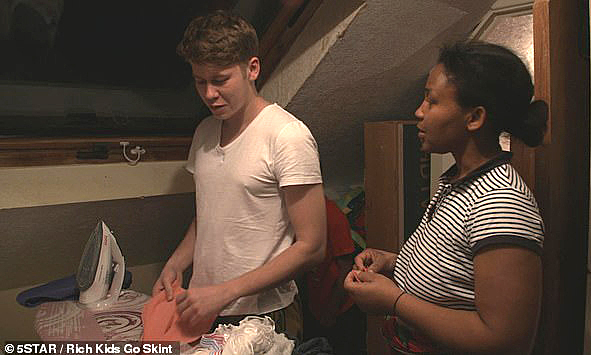 BrotherReni, 20, who has never been restricted from spending money by her parents, was shocked to see a couple skipping breakfast to pay for their children’s school.

Reni has a Syrian millionaire father and a Russian mother. From many years ago, the rich heir was sent by his parents to study in the UK. Currently, he studied Marketing and Publishing, tuition 12,500 pounds / year. Only for school fees, in the past 4 years his parents have spent 85,000 pounds (2.6 billion dong) for him.

Reni currently lives in a 2,500-pound rental apartment. He never cooks but eats out, the main course alone is usually between £ 50-120. His wardrobe is full of brands. On his 16th birthday, his parents gave him a 10,000-pound shirt (305 million dong). “My father takes care of my life from school, accommodation, to night out. There are always other people around to make my life easier,” he said.

Reni was shocked to see that the couple had to fast for breakfast to save £ 280 for their eldest son to take a soccer class and £ 70 for their daughter to study online. “Seeing them skip breakfast, I couldn’t believe it and was very sad,” he said.

The family of 5 lives in a three-bedroom, one-bathroom apartment. Reni was used to the house with 6 bathrooms so he was shocked to see 7 people sharing the same bathroom. Reni was also impressed that the kids in the family all use the laptops for homework instead of playing games. In contrast, the 5-year-old daughter of the couple Lisa is also surprised to learn that Reni is a maid.

During these two days with this family, he helped them with everything from cooking, cleaning to ironing. He is also challenged to buy a meal of £ 7 for his family. At first, he did not know what to buy, in the end he chose a meal with salad.

When it was time to break up, Reni was very emotional. Some of the children in the family also sobbed when they had to break up with him. “Being on the show was a great experience, even if only for a few days. We were very bonded,” he said, revealing that he is still in touch. Reni gave the family a guitar and playbook so the kids could learn new skills.

After the show, Reni said she had a completely different perspective on life. He felt lucky himself. Since joining the program, he cooks more at home, cuts spending and also values ​​the poor more.

Bao Nhien (According to the Dailymail)