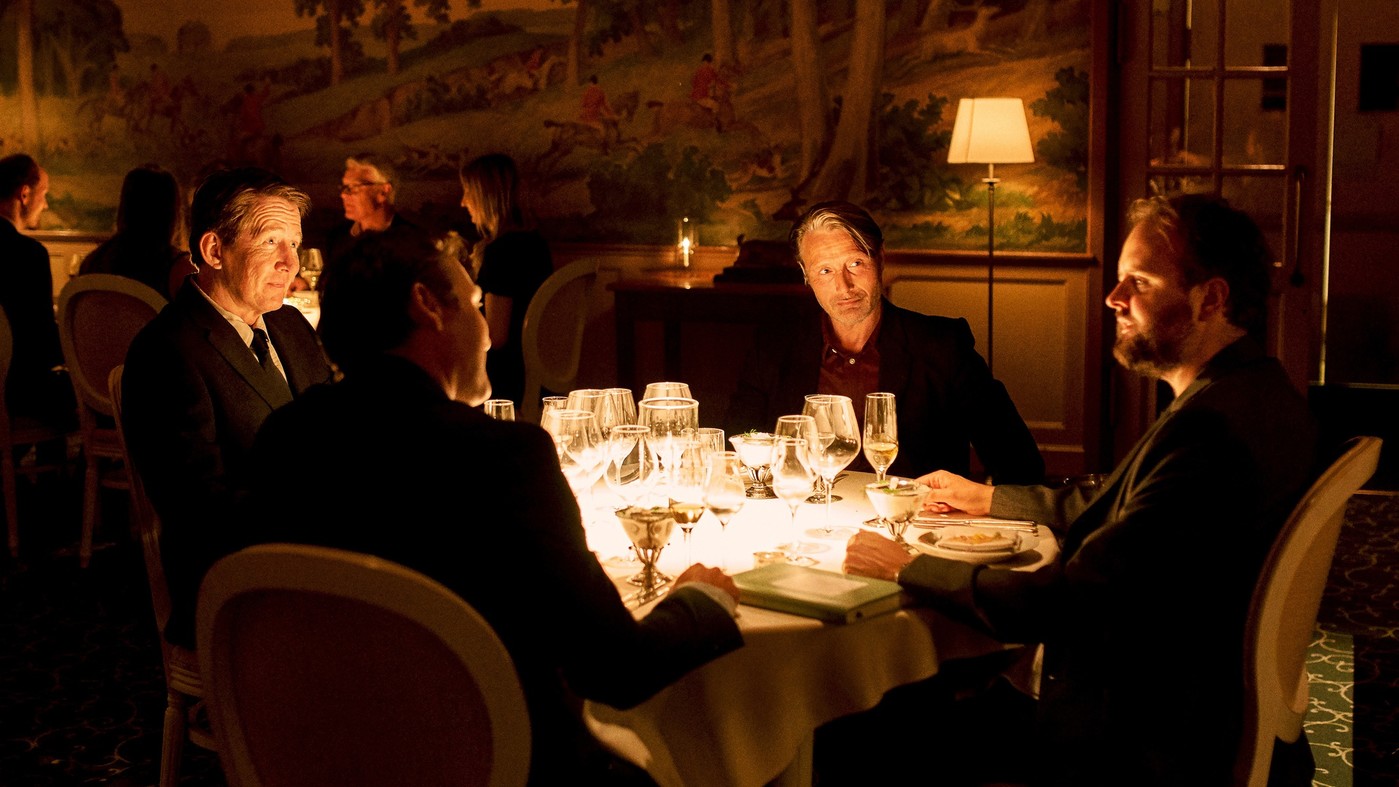 According to Norwegian psychiatrist Finn Skårderud, a man is born with an alcohol deficit in the blood that he has to fill in order to feel good. Four friends, teachers of music, history, psychology and sport in a Danish high school, with a dreary and banal life, decide to test this theory which recommends drinking only during the day, never at night, or at weekends. -end. So during working hours. In vino veritas …

In view of the first encouraging effects, the four friends continue their exploration with scientific rigor, note their “progress”, measure their alcohol intake, multiply the tricks, and note, with delight, that they get better in class, uninhibited, acclaimed by the students. The result is there. Concluding, euphoric. They feel themselves growing wings. To stay in altitude, above the common, the rate must remain constant. Yes, but why stop on the way when it’s so good?

Life comes back to life, everything seems easier

One of them, the once very promising history teacher (Mads Mikkelsen), was slowly sinking into a serious depression. He no longer held his class, causing concern among the parents of the students who had gathered to tell him so. Thanks to the method of this Norwegian shrink, he regains his confidence, subjugates high school students, becomes popular and impresses his family.

He skilfully praises, in progress, the exceptional success of some great alcoholics like Hemingway or Churchill. Masters, lighthouses. And his colleague, the psychology teacher, even pushes a student paralyzed by an exam to drink alcohol just before the oral to break the armor.

Our four friends are amazed at the benefits provided to them by this clandestine experiment that no one suspects, neither in their professional environment, nor in their homes when they return, striving to walk straight, affable and talkative, open-minded and happily cheerful. Life takes on color. Everything seems easier, lighter, more obvious.

Why not push the advantage, increase the doses, adapt them to each person’s personality? The abstainers (those who never consume alcohol) will doubtless have sensed towards which abysses this deceptive practice will lead them.

An uplifting and brilliant fable

Associated with screenwriter Tobias Lindholm (who signed the series Borgen), Thomas Vinterberg stages, with delight, an edifying and brilliant fable on the phenomenon of addiction. At a time when “binge drinking” (getting drunk as quickly as possible and in groups) is essential, especially among young people, the demonstration will not fail to have an effect. Moreover, the film opens and closes with questionable high school rites that revolve around alcohol.

→ MAINTENANCE. Young people and alcohol, when should you worry?

This dramatic comedy advances in two stages. Ascent and descent. The flight, strewn with humorous adventures, is funny. And the fallout, brackish, sinister, tragic. Hangovers are not just physical. We are not far from Feast, by Marco Ferreri, in the disastrous description of a desire for the absolute.

Since his break with Dogma 95 which claimed cinematographic minimalism, Thomas Vinterberg (who films in Danish and does not sacrifice English to better export his films except for Kursk, a commissioned film) chisels an elegant aesthetic – sets, lighting, soundtrack – a stylistic counterpoint to the darkness of its subjects. In each of his films, we find human fragility, collective scenes that go wrong and alcohol lurking to destroy the characters.

Mads Mikkelsen, one of the most expressive faces of contemporary cinema

Its four actors (Mads Mikkelsen, Thomas Bo Larsen, Magnus Millang, Lars Ranthe), awarded together at the Festival of San Sebastian, play with virtuosity this delicate score where prolonged intoxication requires perfect mastery in the interpretation not to sink in too strong effects. Each of them polishes a form of attention to others, of compassion, of desperate mutual aid.

Thomas Vinterberg films, up close, Mads Mikkelsen, one of the most expressive faces of contemporary cinema who, with a glance, with a silence, brings distress to the surface with a striking “sobriety” of play.

1993. Diploma from the National Film School in Denmark.

2012. The hunt, with Mads Mikkelsen, interpretation prize at the Cannes Film Festival.

2016. The community, with Trine Dyrholm, Silver Bear for Best Actress.

2018. Kursk, on the sinking of the Russian submarine.