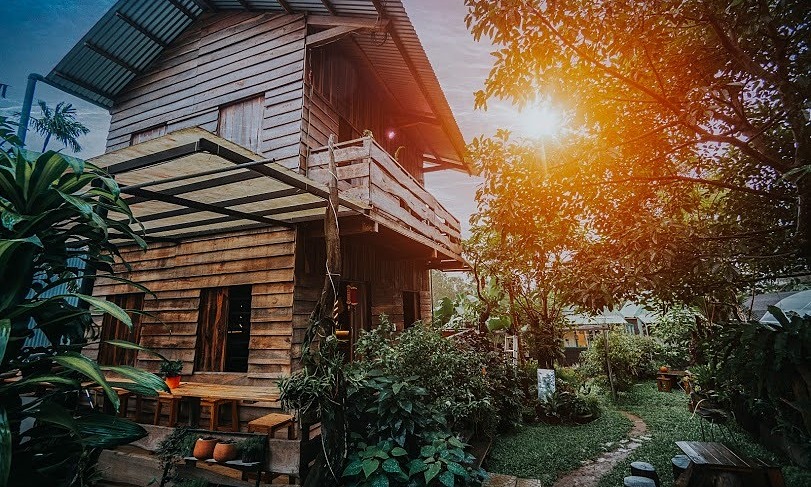 Staying and having to pay in installments for an apartment, the couple still rented a wooden house in Lam Dong to fulfill their dream of “leaving the street to the forest”.

It was cold in November, the wild flowers were glowing with gold all over the hills of B’lao. This is one of the Hong Thuong couple’s favorite times in this land. On Friday evening, the couple and their two children left the boarding room in District 2, boarded a bus to their bungalow in Bao Loc city, Lam Dong. On weekends, they will take care of vegetables, take care of flowers, sip coffee, and listen to some Trinh music. Walking around Bao Loc Lake at night, the cool feeling of the air in the Central Highlands is like washing away all the pressure of life.

“I like to wake up early in the morning in the cool mist, the garden wakes up in the light through the leaves and the sound of birds”, Hong Thuong, 30 years old shared.

The house is located on a plot of land with an area of ​​700 m2, leased by Thuong and his wife for 3 years. At the time of renting, many people discouraged because Thuong and his wife were staying at the boarding house and also have to pay the apartment to receive next year. Renting hours and investing in a place for a weekend getaways, which many people think “fools”.

But with Thuong and her husband, The Phuc, “a small house on the steppe” is a dream. Four years ago, a friend of them offered to sell the land in Bao Loc, for only 3 million VND per square meter. Knowing this highland area is cool all year round, it is convenient to come from Saigon, land is cheap, Thuong and her husband love it.

At this time, the couple is newly married, not enough to buy. Only a year later, collecting a little money and borrowing more, they contacted their friend to visit the land. It was also the first time that Thuong came to Bao Loc. “Truly as in my imagination, the weather here is so beautiful, the day is sunny, the day is bright, the night is cold, the trees are rich and green,” she said.

Having land, Thuong and his wife are more motivated to “plow”. At one point, each person worked 2-3 different jobs, from morning to midnight. “Many days I went to bed with my baby for 2 hours, the client still had to wake up to handle it. At that time, the second child was only a few months old, I woke up the baby, too,” Thuong recalls.

With two children, the couple knew they could not stay in the cramped room forever. They were forced to choose between two options, one of which is to sell land in Lam Dong and borrow from a bank to buy an apartment, after 3 years of having a house, and the other is to save land and save after 3 years of building a house back home. . Finally, thinking about the young age, mainly in Saigon, they chose option one. “Selling the land is like selling a dream, it is very loss in me”, the woman from Quang Binh said.

Throughout last year the couple focused on the goal of paying for the progress of the apartment. One day at the end of the year, Hong Thuong accidentally read the post on renting a wooden house in the heart of Bao Loc. “The dream of a small house in the savannah” arose. They still have to repay their bank loans so they can’t leave the street to return to their hometown. “But we wondered why I missed this opportunity. Why can’t I try to both realize and build two dreams at the same time,” said Mr. The Phuc.

A week of thinking, the couple weighed and measured finances and decided to hire for 3 years. The first goal is a place for families to rest, relax, get close to nature, then find customers who can maintain rent and renovate living spaces.

Initially, the house was originally just a two-story bungalow, with no kitchen and the toilet was sketchy. To ensure the homogeneity of the house, Thuong and his wife bought pallet wood and built the bar and kitchen on the ground floor of the bungalow, adding the balcony hallways and wooden furniture. On the current site, there are two more cheap-material houses and a tent for a picnic experience.

The house was renovated on the occasion of Covid-19, the couple’s work was affected, and renting a wooden house was also difficult. But it was also the occasion that Thuong and Phuc had more time to care for this place. Many days, the couple came up with ideas, the wife kept, the husband closed the railing, wooden furniture. Or in the afternoons the husband digs the soil, the wife and children plant trees, water …

Thuong said that in the beginning, there were friends who told them they were “crazy” and “reckless” because they dared to hire them for such a short rental period and so much renovation costs. However, there were also people who praised Thuong and Thuong for being brave and daring to live. Many people have supported by staying here.

“Leaving town to go to the forest does not have to wait until we have enough finance, or have enough time to do it, if we just want to, we will find a solution for ourselves,” said the young couple.

See more photos of the space “hiding in Saigon dust” by Thuong couple: