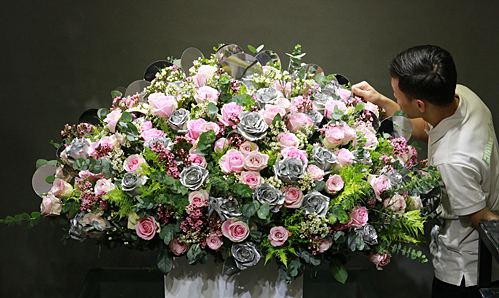 Ten years of marriage, Mai only received her husband’s Valentine’s gift once in the first year. Years later, she received only her husband’s annoyance, if hinted at.

She “remembered” on February 14 last year, her 9-year-old daughter wondered: Why did Ms. Lan (neighbor) get flowers while her mother did not?.

“I have not felt my husband’s love for a long time. This marriage has been paralyzed for a long time, it has only been maintained because of two children,” said Thanh Mai, 37 years old, in Cau Giay district, Hanoi.

She is an office worker. She goes to work every day and takes care of her children at night. Mai’s husband is a business director, leaving early. The time is different, there are days when they don’t see each other. Therefore, on days like February 14, she is looking forward to warming up the couple’s love.

In the past, Mai also suggested cleverly when she told friends and colleagues that her husband gave flowers and chocolates… but her husband only frowned and said: “Draw a story, get married and then need more romance”. Hearing this, the wife fell silent. Recalling the four years of love, he never forgets to give flowers on these days. “He’s changed so much. My Valentine disappeared shortly after the wedding,” she sighed.

Phuong Nga, living in My Dinh, Hanoi also admits that “365 days in a year are the same, except for Tet”. When she was newly married, on Valentine’s Day, her husband also bought flowers, but his wife complained that it was expensive and wasteful, and then converted to baby diapers. Seeing his wife’s “rice money” attitude, the husband got bored and gradually ignored the holidays. A few days ago, going to work through the flower shop, Nga suddenly felt sorry for herself.

Professor Cindy Hazan of Cornell University, USA once conducted a survey of 5,000 couples of 37 different cultural levels, drawing the conclusion: “The term of love usually lasts 18-30 months”. She thinks this is enough time for a man and a woman to meet, date, get married and have children. After this process is over, the two no longer feel passionately in love.

According to writer Hoang Anh Tu, when married life is covered with rice, oil, and salted fish sauce, romance seems to become a luxury. “However, husband and wife still need to show their love. February 14 is an occasion to warm up love, remind us to temporarily quit work to touch each other, say love, remind each other of our love.” Mr. Tu said.

According to the writer, this holiday is like an alarm bell. If the bell rings but the husband still forgets his wife, the wife is still alone, the marriage is “clinically dead”.

A survey conducted by the online market research company W&S in 2012 with 2,000 people in a number of major cities in Vietnam showed that 39% said that Valentine’s Day has a particularly important meaning. Only 17% of people surveyed consider Valentine’s Day to be merely “Fashionable”, “No special meaning”. The most important reason why people look forward to Valentine’s Day is “Because there is a chance to warm up”, which is 33% of the choices. At the top of the most desired gifts on Valentine’s Day is “A sweet kiss”, accounting for 58%, followed by perfume, clothes, two-person trip…

Although she is no longer at the age of “sweet kiss”, Mrs. Hong Van, from Van Giang, Hung Yen is still touched when her husband gives flowers on Valentine’s Day. Both grandparents are over 60 years old, they are often teased by their children: “Parents are more romantic than young people”. Since his retirement, Mr. Cuong has planted a few rose bushes in his garden. On Valentine’s Day or March 8, he picks a big bunch for his wife.

Mr. Cuong is romantic, Mrs. Van likes flowers, everyone thinks they are a natural couple. In fact, they also have many times of conflict and quarrel because the previous husband’s work was busy, rarely in the kitchen as well as helping his wife take care of the children. But in return, on holidays, he always gives her love with bouquets of flowers or small gifts. “Perhaps that’s why the couple’s relationship is still good,” he said.

As for Mrs. Van, the secret to preserving her marriage is “open eyes”. “As a husband and wife, if you open your eyes and look closely, you will only see each other’s shortcomings. Closing your eyes is a way to mimic the opposites of your partner, to treat you with love and sympathy,” she explained. like.

According to writer Hoang Anh Tu, one person’s experience and perception of married life cannot be applied to another. Not everyone likes roses, what you need is to find your own way to happiness. “Happiness in marriage always has something in common, which is care and understanding.” Care is not verbal, nor is it abstract, but very clear: Priorities. Husbands put their wives first on their list of priorities, like putting down their phones when they hear their wives sigh, or scheduling their wives to prioritize other things if it’s not so urgent. Priority even when the wife has not said it, is to pay attention to her wife more. Do not lose to your wife. Don’t compete with your wife.

“February 14 is, after all, an opportunity for us to remind each other that: I cherish you, I cherish this marriage instead of thanking you for being together,” the writer affirmed.

If the wife is a housewife, on Valentine’s Day, the husband only needs to take the initiative to cook and say to his wife: “Thank you for everything”, her heart will be very warm. Or like a husband busy with work, always coming home late at night. On February 14, the wife should prepare dinner and tell her husband “No matter how late you come, I will wait”. Surely, they will be filled with happiness.

“Just act from the heart, even the little things can show the breath of love,” said psychologist Dr.

According to the doctor, for couples who have been married for a long time, the interest is not shown based on the value of the gift, what is important is the sincere affection of the giver. If Valentine gets a gift from her husband, the rest of the days she doesn’t care about her wife and children, and the wife can’t be happy. The most valuable thing a husband and wife can give each other is sharing, sympathy, and pulling each other into their lives.

Longer marriage does not mean that love is guaranteed to be stable. The older the marriage, the more momentum it needs to have so as not to fade away. What makes a marriage so full is the fact that the husband and wife do not forget to “fuel” to warm, care for and renew it. “February 14 is one of the good times to practice that,” Ms. Minh affirmed.

After many years without Valentine’s Day, this year Mai decided to surprise her husband when she took the initiative to book a table for only two people with the reason that she did not want her marriage to die of old age. As for Nga, when she received an invitation to watch a movie from her husband when Hanoi had just reopened cinemas, she immediately agreed, with the message: “Every Valentine I want to have two of my own”.